Here's a story where the inker's style overwhelmed the penciller's. "The Young Man Who Cried...Werewolf...Once Too Often" in DC's Secrets of Sinister House 8 (Dec/72) was published without credits. It's been indexed as drawn by Bill Draut. But just as his pencils were almost buried by Joe Orlando's inks at Warren... 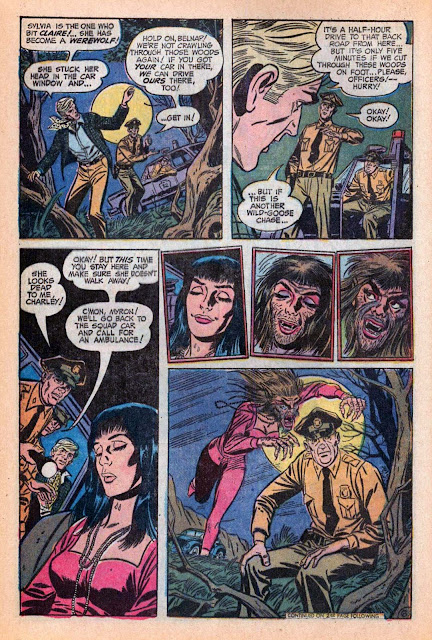 The faces in close-up or medium shots certainly show Draut's clean lines. It's in the long shots that you can see the penciller's angular, somewhat awkward figures. See especially the man with the kerchief in the first panel and the policeman in the center of the second panel. The pencils are by Bernard Baily. He was most famous for the Spectre in the Forties, and continued with various publishers, doing mostly anthology work like this in the Fifties. Before returning for this story, he had worked on Prince Ra-Man in House of Secrets in the mid-Sixties. I believe "...Werewolf..." was his first Seventies comic book work (all of it at DC), and he returned to inking himself after this one story. He replaced Mike Kaluta on the Spawn of Frankenstein series in Phantom Stranger; his last comic book work appeared around 1975. 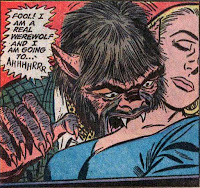 This panel from another page showcases Draut's inks again, more than Baily's pencils, but I chose it for its clue to the writer. On a number of his other mystery stories in the Seventies he uses the expression "Pshee!" from his signature series, but not on this story. However, the "Ahhhhrrr" leads me to ID this script as by Sugar & Spike's Sheldon Mayer.
Posted by Martin OHearn at 12:52 PM