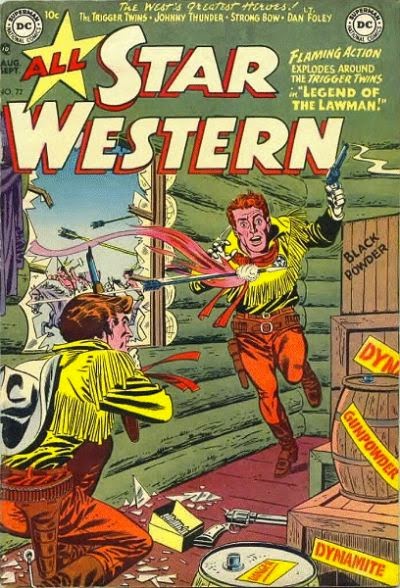 Back to just Orbit and DC as publishers here.

With "Song of My Heart" paid at a rate lower than for regular writing, I believe that William Woolfolk is revising one of his own stories, but if so, the title has already been revised from one we've seen earlier.

Woolfolk's sole western for DC has been known, like the war stories, from the Julius Schwartz payment records.

Posted by Martin OHearn at 7:24 AM No comments:

Jim Aparo is in his first year of work at DC when Girls' Love Stories 142 (Apr/69) comes out. The general rule with the romance comics is anonymity, and here editor Jack Miller makes Aparo even more anonymous by assigning him an overwhelming inker, Bill Draut, on the story "Thrill-Chick." (There are none of the nonconventional, angled panel borders Aparo uses on Aquaman, either.) 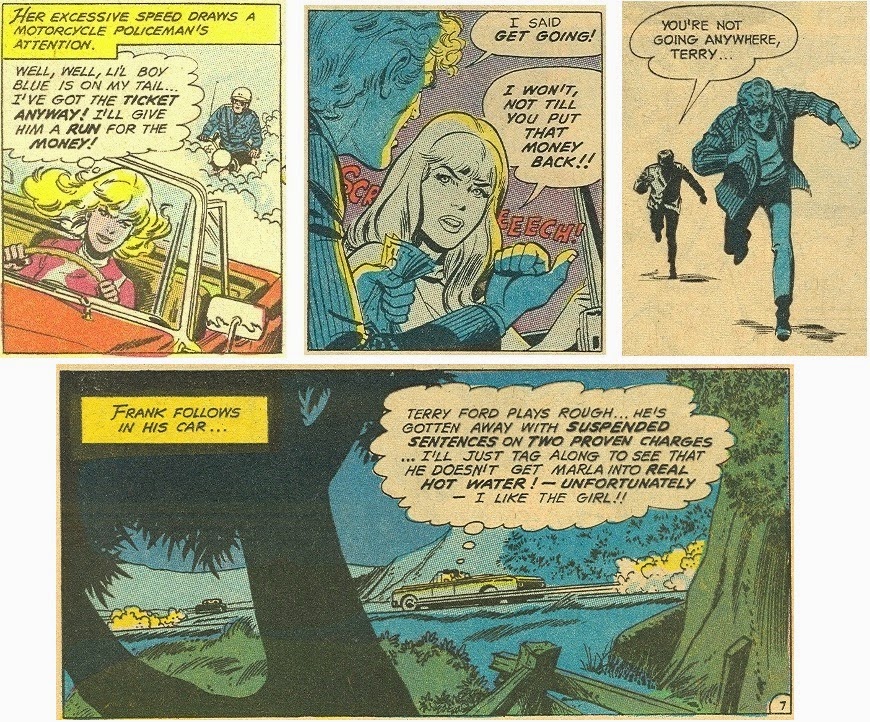 I started looking over the late-60s/early-70s DC romance comics in search of possible Richard Hughes scripts, but haven't run across any so far. I can see stories by Robert Kanigher, Jack Miller, and Jack Oleck, but the other writers like Barbara Friedlander, Lee Goldsmith, and Phyllis Reed (as given in the Who's Who) I haven't been able to credit with stories at this point. I'm sure there are writers not yet connected with these books. In other words, I can't ID the writer of "Thrill-Chick."
Posted by Martin OHearn at 9:22 AM 2 comments: 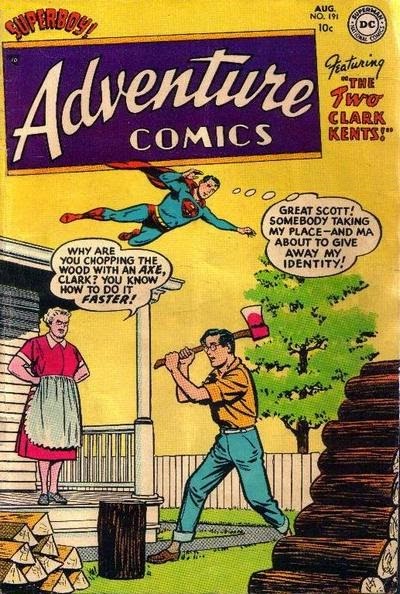 A William Woolfolk story bought by Fawcett is followed here by ones for DC and Orbit. That story isn't published by Fawcett; This Magazine Is Haunted 16 is Charlton's second issue after buying the rights to the title and inventory.

And Woolfolk returns to Archie Publications after writing Black Hood and so forth in the early-to-mid Forties; but with a try at the company's by-now flagship character he scores another rare rejection and moves on.

The Lighter Side of Ponytail

Dell editor D.J. Arneson recalls Lee Holley producing the entirety of the comic book spinoff of his syndicated daily panel/Sunday strip Ponytail, editorial input unneeded at Dell's end, and that's true as of issue 4 (and in fact through the title's run, including at Charlton later). Holley did supply all the covers from the very beginning, and there were some panel reprints.

I'll stick with "produce" rather than just "write and draw", because according to the Bails and Ware Who's Who, Frank Hill assisted Holly on the strip and on the comic book, so the later work was not necessarily Holley solo. 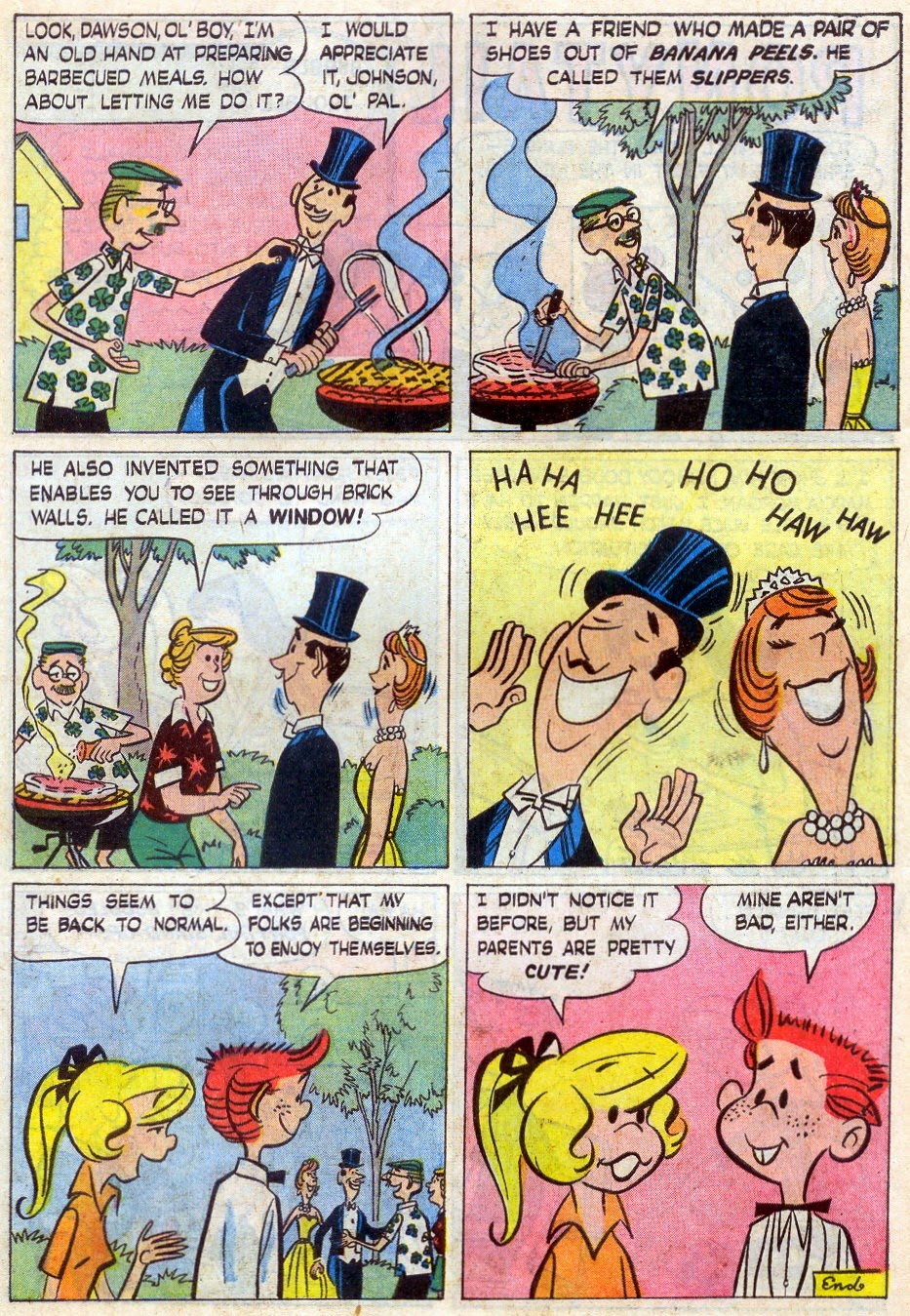 The Who's Who credits Dave Berg and Bob Gustafson with the feature in the first years at Dell. Berg does a pretty good job of ghosting Holley's art style, but he doesn't try to replicate it exactly. Secondary characters are the best place to find something closer to a ghost artist's own style; see Donald's parents in panel 4 above.

The Who's Who credit for Bob Gustafson is for writing, unconfirmed, but his art should be evident. Some Mort Walker-style touches give him away, as in Dell's Gulliver's Travels; he tries even less to mimic Holley on the Cassie back-ups, as above. He may well have written these two issues; it looks like a single writer did all the stories. The Grand Comics Database has given Frank Hill the credit for issue 2's stories, but per Bails and Ware this would be before his time on the strip.