The fewest gaps in my writer IDs on Blackhawk at Quality are in 1955-56, the final two years of Quality Comics; those gaps fall in 1956, and I'll try to fill them in the near future.

See if any Dick Wood or Bill Finger flags jump out at you in these tiers from #84's "The End of Blackhawk Island" and "The Race of Doom." 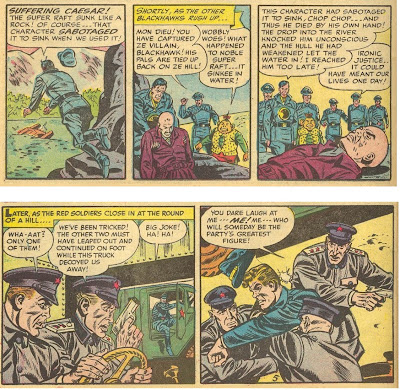 Unless I've missed an anomalous story, by this point Dick Dillin (pencils) and Chuck Cuidera (inks) are doing all the art on Blackhawk, including the covers. The Chop Chop back-ups by other hands are reprints. 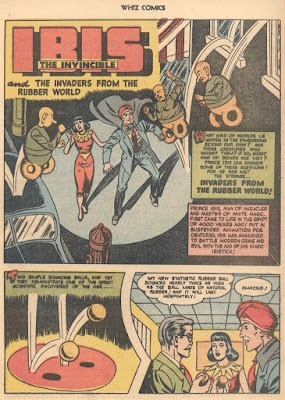 After a time of selling to just Fawcett and Orbit, William Woolfolk includes Quality again among his publishers with this month.

He has used the last man on Earth concept before, in Plastic Man, but this CMJ story is entirely different.

This is the point at which Woolfolk notes payment for the Anthony Action script he wrote on speculation back in May 1946 (most likely for his own company, O.W., before it expired); he sells the story to Orbit and it's published in Wanted 31-32.

In the third Mary Marvel story of her series, "A Telegram to Adventure" (Wow 11, March 10, 1943) the Bromfield butler Jives is introduced (Mary Batson Bromfield and her foster-mother had a different-looking butler called Peeves in the first story). We're told that "Jives is an addict of detective stories! And because of that, his imagination is a little 'overworked'!" When he trails Mary to discover the job she's keeping secret (telegram messenger), he lets a gang think he's English Harry, the slickest crook in the rackets. 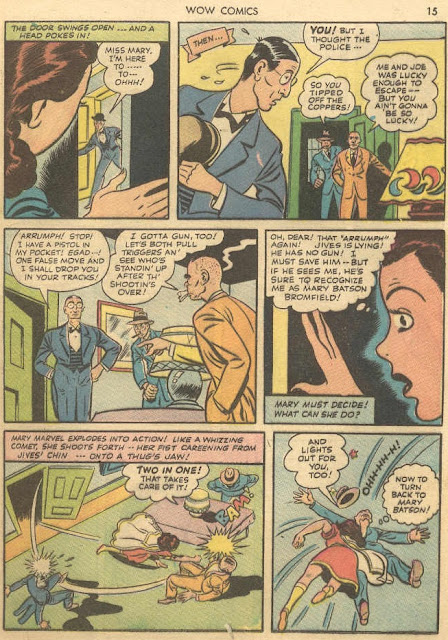 The Wayne butler Alfred first appears in Batman 15 (April-May, 1943). Alfred, too, fancies himself a criminologist—on the splash page of "Here Comes Alfred" he's wearing a Sherlock Holmes deerstalker cap. These issues of Batman from DC and Wow from Fawcett would have been in production at about the same time.

Alfred's first story was written by Don Cameron. But Jives's was by Batman co-creator Bill Finger.

This post explains how a particular Captain America story jumped out at me as Finger's. The same writerly trademark is in "Telegram to Adventure": the throat-clearing "Arrumph," a spelling without an initial "H" used by no one else that I know of. As Mary can tell, Jives harrumphs when he lies, and so this becomes a plot point. (Mary winks at the readers with an "Arrumph" herself in the final panel.) When I encountered this I thought "Bill Finger???" only to find that, according to the Who's Who, he was indeed at Fawcett—known to be writing Captain Marvel, at any rate—in 1942-3.

Jives amateur-sleuths again in the next story, "Mary Marvel and the Anxious Auctioneer," (Wow 16, April 7, '43) and this time he wears the deerstalker cap. But here the writer is Joe Millard.

I won't try to guess at the Mary Marvel artists. I suppose Marc Swayze may be in there somewhere, but this is the point at which Fawcett starts using multiple artists in the production-line shop system on some features. That the Mary Marvel figures are by different artists than the secondary figures becomes more and more obvious over the next few issues of Wow.
Posted by Martin OHearn at 12:55 PM 4 comments: 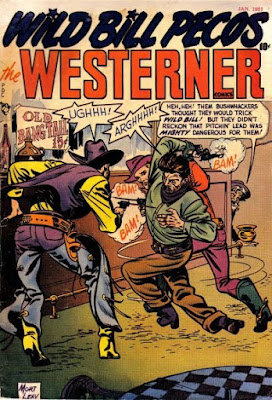 The stories William Woolfolk entered in his records book as writing this month sold to Orbit and Fawcett.

Although the title of "Not Necessarily Dead" was changed by Orbit, the phrase still appears at the end of the splash page blurb—the place where many Golden Age stories repeated the title. "Case of the Perjured Parrot" kept Woolfolk's title up through the house ad of the previous month; perhaps, shortly after that, the editors decided not to go with an Erle Stanley Gardner title.

Posted by Martin OHearn at 4:25 PM No comments: