Future Man to Karzz to Jorzz

Three Otto Binder pieces bear some resemblances. The later ones certainly weren't rewrites, but when Binder sat down to write anew, evidently he was inspired by his earlier work. The resemblance of the first two is old news, but I just read the third and had to compare it to the second to reassure myself that it is indeed a new novel. 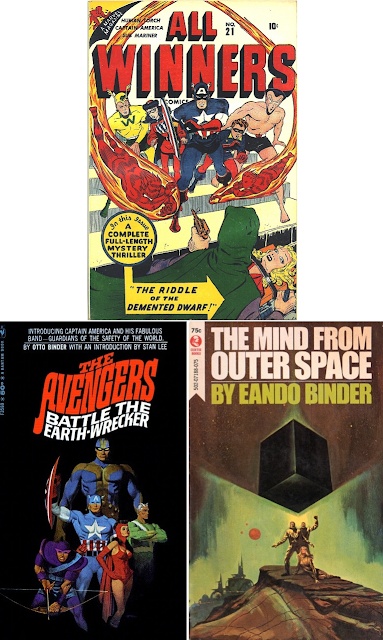 In "Menace from the Future World" in All Winners 21 (Winter, 1947), Future Man, who has mental powers, fights the All Winners Squad, who are led by Captain America. To clear 20th Century Earth for his people of 1,000,000 A.D. Earth to inhabit, Future Man intends to use super-science weapons of extermination on five continents.

In The Avengers Battle the Earth-Wrecker (1967), Karzz, an alien from the future, fights the Avengers, who are led by Captain America. He's hidden world-wrecking super weapons in four corners of the globe, as he wants to create an alternate time-line where 70th Century Earth never stands in the way of his galactic conquests.

In The Mind from Outer Space (1972), the alien Jorzz, a free mind with mental powers,is after segments of a super-science secret hidden 35,000 years earlier in four corners of the globe, one that will enable him to conquer the galaxy as he had planned to before he was disembodied back then. The heroes from a scientific think tank fight him with technological super-powers.

The heroes jokingly refer to Jorzz a number of times as "Mister Mind."
Posted by Martin OHearn at 9:31 AM No comments: