How much Jim Steranko contributed to the published stories of the characters he created for the Harvey Thrillers begs two questions: how many scripts did he submit and how many were used? Steranko's scripts on Nick Fury, Agent of SHIELD, are much more in the Marvel style than anything at Harvey, so although there isn't a lot that lets me say "The Birth of a Hero" is written by Steranko, there's nothing that leads to any other writer. 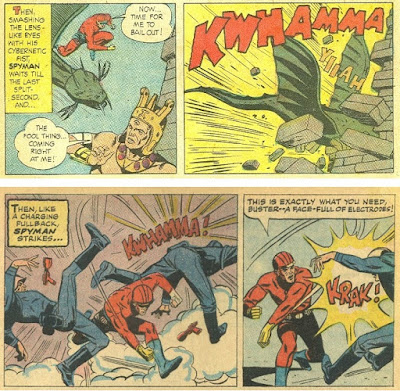 Look through France Edward Herron's credited work at DC on Blackhawk and Challengers and you'll find "Kwhamma" a lot.

Otto Binder's attributions for the back-up pieces in the Thrillers line seem to have morphed into credits for the main features, but I can't find him on Spyman, for one. I can't even find his style on the Eye Spy backup in #1.

Nick Caputo gives Mike Esposito as a possibility for the inks for the first part of Tuska's story. A CGD guess at the second part's inks is Carl Pfeufer.

I suspect the intro pages on the Thrillers are more likely written by editor Joe Simon than by the main-feature writers.

Stanley and His Monster under Joe Orlando

Stanley and His Monster was only one issue old (having displaced The Fox and the Crow in their own title after a couple of years as a front-of the-book "back-up" feature) when the editorship and the format changed. Issue 109, the last under Murray Boltinoff, contained a full-length story with credits for Arnold Drake (the feature's sole writer since the first episode in Fox and the Crow 95), Bob Oksner, and Tex Blaisdell. As of 110, under Joe Orlando there were no writers' credits, and signatures for the story artists only in 111. The format became three stories per issue.

Orlando kept Oksner and Blaisdell for some stories, but did not use Drake. He went to Howie Post for scripts. The credits pasted onto '80s reprints for Drake are very likely sheer guesswork rather than from the records.

The inker on the Sekowsky story could be Tex Blaisdell, but Stanley's face throughout looks to be by a different hand. Why is there a comma in the title? Ask the Rolling Stones. 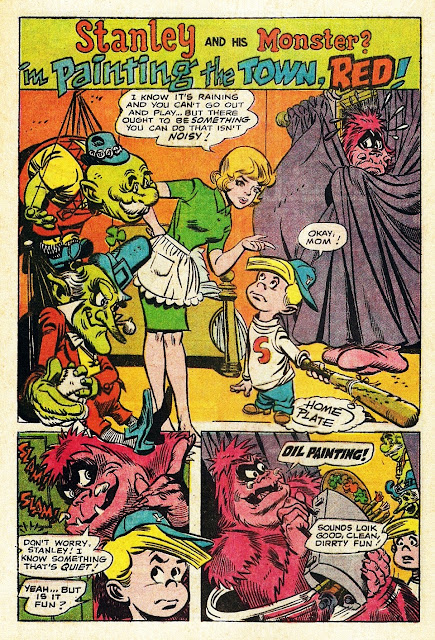 
In The Best of DC, out of inventory; written by Post