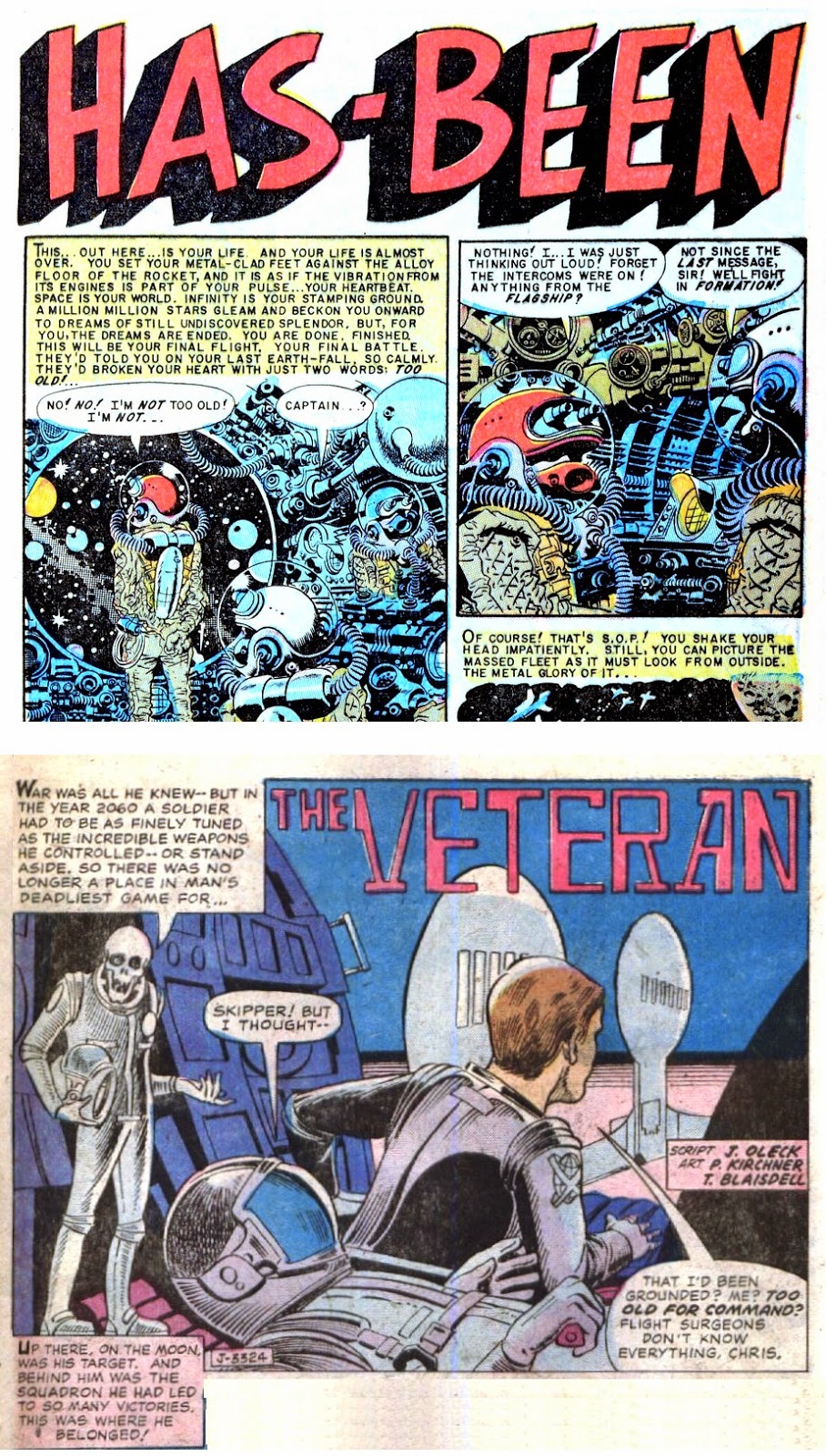 Jack Oleck didn't actually sell the same story to five different companies. He sold the same setup and twist ending, though, in these five scripts. A rocket captain is too old to continue in space when split-second decisions have to be made by those with the reflexes of the young. Irony ensues.

A comparison of the stories shows that Oleck wrote each one anew. Even in the final panel where he has to make the same point, he comes close on some but obviously is going from memory and is rephrasing. Although other writers at, for instance, Prize, plagiarized EC scripts, Oleck's style shows up in the newly written work on the Atlas, Prize, and Harvey versions just as well as in the recorded EC and credited DC versions.

The plots vary in places as they make their way to the twist. The Harvey story is only two pages long, so it has to rush right along. Some share a space war setting, and two present flashbacks to the protagonist's father.

The Harvey version kept the story alive in the Sixties too; it was reprinted in Double-Dare Adventures 1 (Dec/66).

If you want all your pencillers' work homogenized into near indistinguishability, you could hire Vince Colletta to ink them. In proto-Marvel's Love Romances, My Own Romance, and Teen-Age Romance in 1960-61, Dick Giordano has a good number of stories—some signed and many not—inked by Colletta. As distinctive as Giordano's work should be, you have to work hard to find him under the inks, and when you figure that he's the main penciller for Colletta on this run of issues, you might start seeing him where he's not.

Among the possibilities, I can follow Matt Baker's style under Colletta's inks if I work hard at it; I believe, though, he's gone from these titles just before Giordano comes on board. Odin only knows what Colletta's own pencils might look like, if indeed he's doing any at this point. The Who's Who has Hy Eisman ghost-pencilling for Colletta on Marvel romances in the early Sixties, but no one (least of all me) has found him there yet. 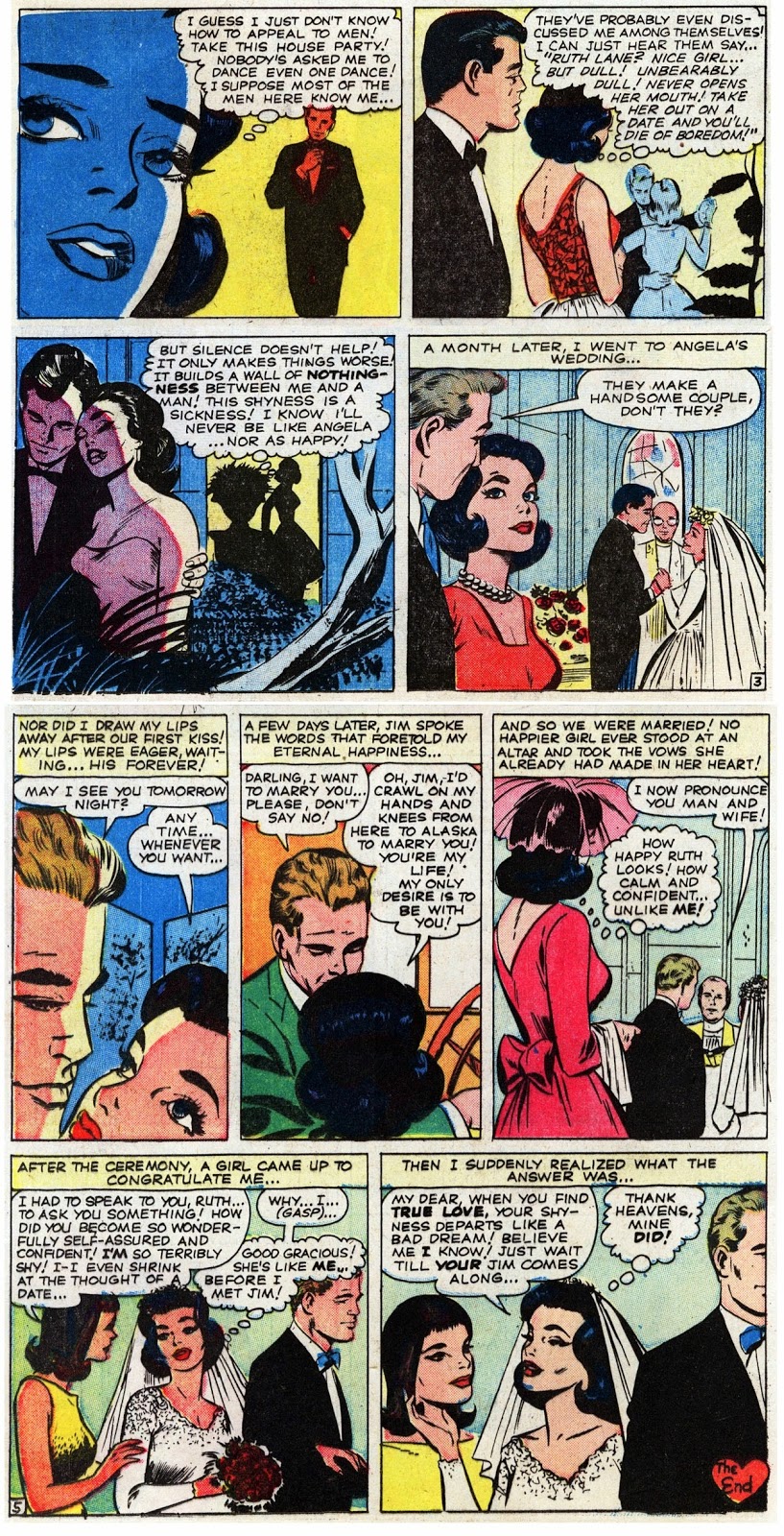 One story attributed to Giordano/Colletta is "Too Shy for Love" (Love Romances 94, July/61). The actual penciller I see is an Atlas/Marvel anthology book regular who inks himself (and signs himself) on stories in 87 and 95.

Consider the male figure in the first panel of each of the first two tiers above; those show Paul Reinman's typical quirk of the head best. I can tell myself I see his style in the minister in the third tier and the main character, Ruth, in the first panel of the final tier. And I don't see any signs of Dick Giordano—but that's no thanks to Colletta!
Posted by Martin OHearn at 12:36 PM 3 comments:

This Is Not the Wood Brother You're Looking For

Big Town was DC's tie-in to the radio/TV show about crusading newspaper editor Steve Wilson. When Julius Schwartz took over editing from Jack Schiff in the process of putting together #3, he inherited the records of scripts and artwork bought. I can't say how, but somewhere along the lines it seems a mistake has been made in crediting the writer of a few of those scripts.

Dave Wood would write Big Town stories for Julie, and wrote other features for him like Strong Bow. But from the evidence of the stories themselves, he didn't write all the stories he's supposed to have in issues 1-3. Some were actually by his brother Dick, who was at DC writing Vigilante and such.

"Deadline Nightmare," the very first story, sports such interjections as "Great Hannah!" and "Suffering cats!" "Steve Wilson's Disgrace" in issue 3 sports "Great Hannah!" again and "Great suffering—!" These are the sort of Dick Wood expressions rampant in Man from UNCLE and Star Trek later at Gold Key. If Dave used them on a story added to the records by Schwartz first-hand, or in his credited stories much later for Murray Boltinoff, I haven't run across that story yet.

Dick and Dave did share some tells. "Phantom from the Past" in Big Town 2 uses "Great thunder" and "Great ghosts," so lacking more obvious Dick Woodisms, at this point I'd say crediting Dave is correct.

Dèjá Vu for Millie the Model

This list is only the first wavelet in a tide of Millie the Model refries, to use the term cat yronwode came up with for Spirit self-plagiarizations. Scripts are reused, if lightly rewritten, but the art is all-new. There are refries too in the Millie the Model Annual, and in the companion title A Date with Millie/Life with Millie. When the feature takes a turn into soap opera, of course the humor-related earlier stories can't be mined any more. But when Millie returns to humor in 1967—comes the deluge!

This is no doubt an incomplete list in that there are gaps in the early issues available; I could well have missed any number of first-time stories. What makes it harder is the lack of story titles in the Fifties. If a story seems familiar it has to be tracked down by looking at the comics themselves--and some around 1960 may be familiar because they're the originals for refries published around ten years later. ("Millie's Museum Madness" in 97 is the second of three uses of that story.)

As far as I can tell, Stan Lee reused his own scripts; he didn't dip back into the earliest Millie stories by other writers. 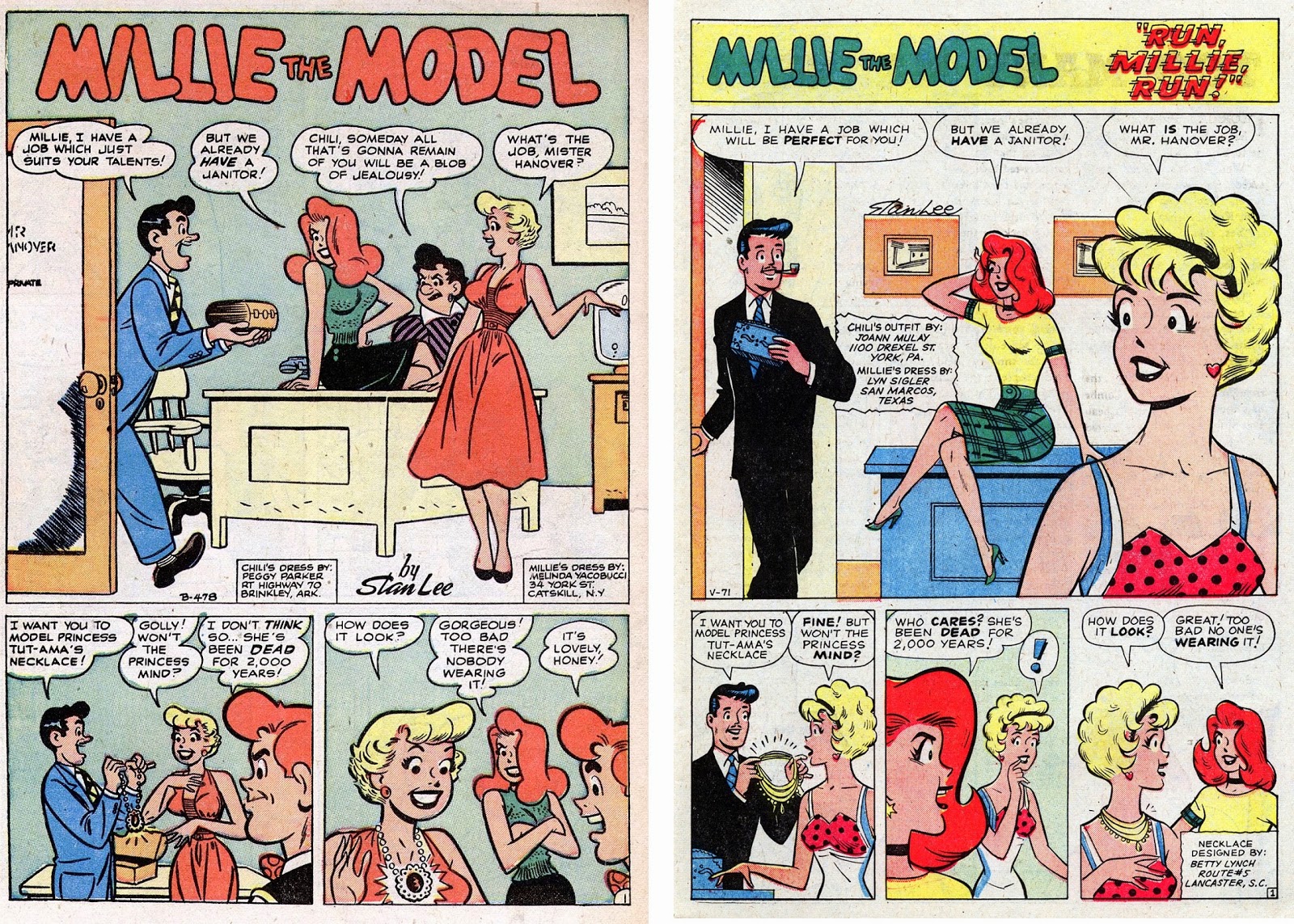 Jack Oleck Dips His Toe in the Charlton Waters

As I was skimming the Fifties Charlton titles for Carl Memling stories, I had Dick Wood's handful jump out at me, since his interjections are so distinctive. Another writer not known to have worked there, whose distinction lies in his captions, got my attention with another four stories. Jack Oleck poses rhetorical questions and otherwise dwells on the characters' bad choices with specific phrases I'll go into in later posts on his work elsewhere.

I was concentrating on the crime and horror/mystery titles, so Oleck may have a few war or romance scripts at Charlton too. All four stories here are drawn by Steve Ditko. 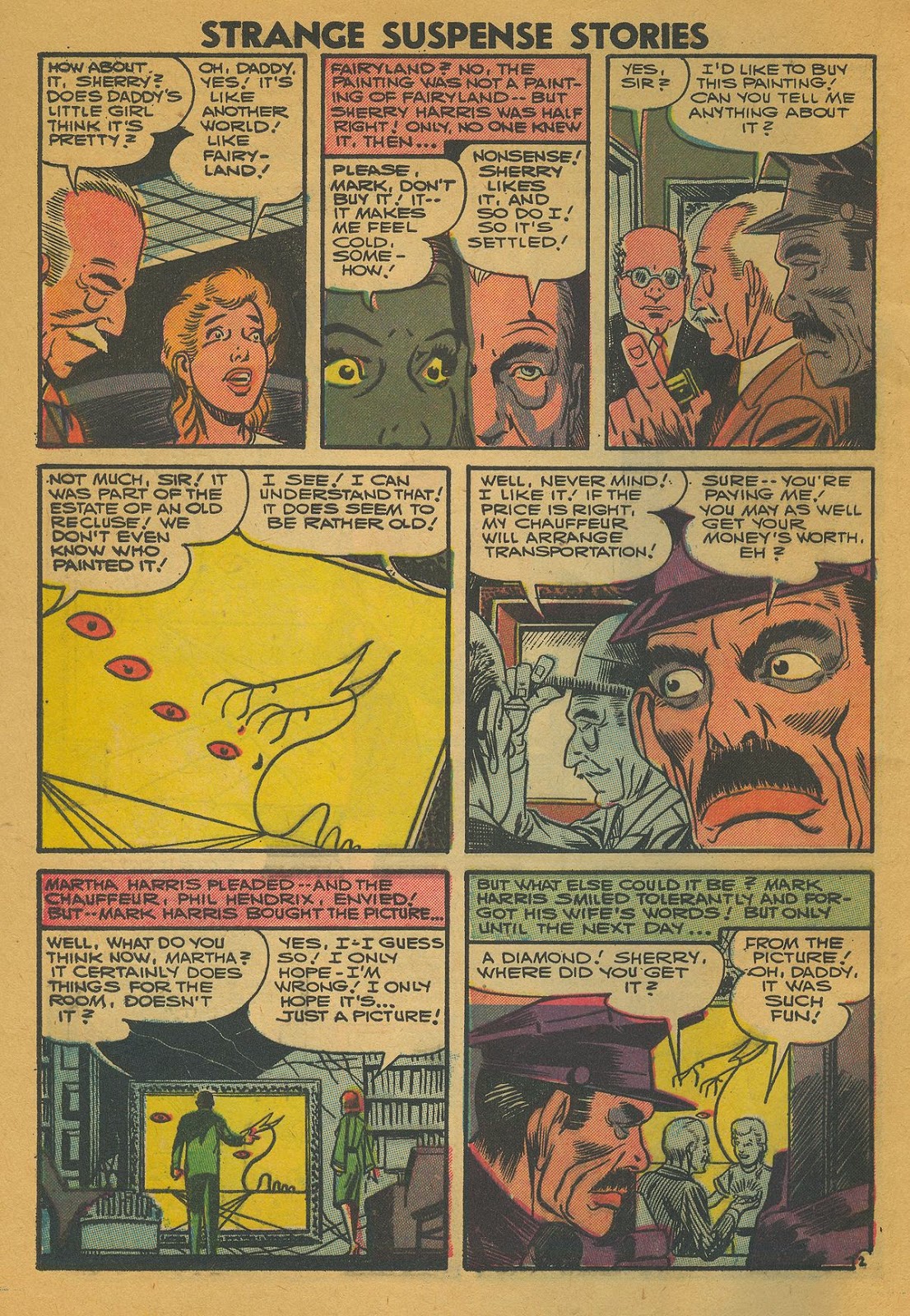 Jack Oleck scripts in Out of This World