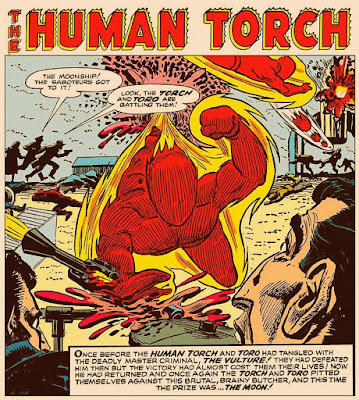 For completeness' sake I've listed all the Human Torch 1950s revival stories, but most of the Hank Chapman IDs are not new; I identified him on Young Men 24 and 25, and then Lou Mougin did on Human Torch 38's three stories, Sub-Mariner 35, and Captain America 78. When Chapman returns to the feature after the first YM stories, all of his scripts use Toro as narrator.

Joe Gill often sets up his story in the blurb, or fills in information in a caption, with the past participle: "They had defeated him." His use of past or present tense is inconsistent—a few times within a single script—but I found some of the stories in the different tenses tied together by references to the Torch's and Toro's "unique body chemistry." In his first two stories in YM 26 and 27 he uses "Up, flame!" and then "On flame!" before settling on the standard "Flame on!"


out of inventory
in MARVEL SUPER-HEROES

There are a couple of exceptions to Bill Everett's run in Sub-Mariner's 1950s revival: two stories drawn by Bob Powell. It isn't a stretch to find Joe Gill on the Devil Octopus story when you know he's writing the Torch in the same issue. The Black Shark story in Men's Adventures 27 (May/54), though, is still a poser. "Aaeeeeegh" in two spellings and a "Walloping halibuts" suggest someone else yet to be determined.