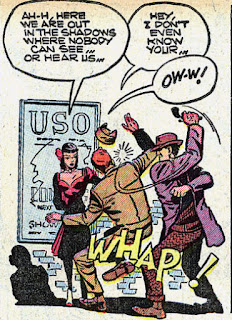 After running as an anthology adventure book, Timely's Young Men took to presenting series—four of them: Flash Foster, a hot-rod racer; Rocky Steele, a boxer; Rex Lane, an occult detective; and Buzz Brand, a soldier in basic training. After three issues, publisher Martin Goodman and editor Stan Lee decided they liked the series idea fine, but tweaked it in late 1953 by replacing these characters with the Human Torch, Sub-Mariner, and Captain America, all last seen in 1949.

The first writer on the revived Human Torch was Hank Chapman, and by the end of the revival, the character's major artist was Dick Ayers. They had already worked on a series in Young Men: Buzz Brand.

Of the four short-lived series blurbed on the splash pages as "Young Men in Action," Buzz Brand is the one where I find Chapman's trademarks like "Ow-w," "Holy smokes," and "Cripes."

The GCD says that stories signed "Ayers" as opposed to "Dick Ayers" at this time (as are the first two here; the third is unsigned) are inked by Ernie Bache.

The two story titles come from the covers.

Posted by Martin OHearn at 12:04 PM No comments:

Now that I've seen Mo Marcus's work (he signed the first story in this issue of Charlton's Go-Go—#6, Apr/67), I would agree with Mark Evanier that Marcus started off the story in Dell's Monkees 1, the subject of my last two posts. The no-name gimmick here makes sense given Mark's suggestion that this was meant for a Monkees story at one point. 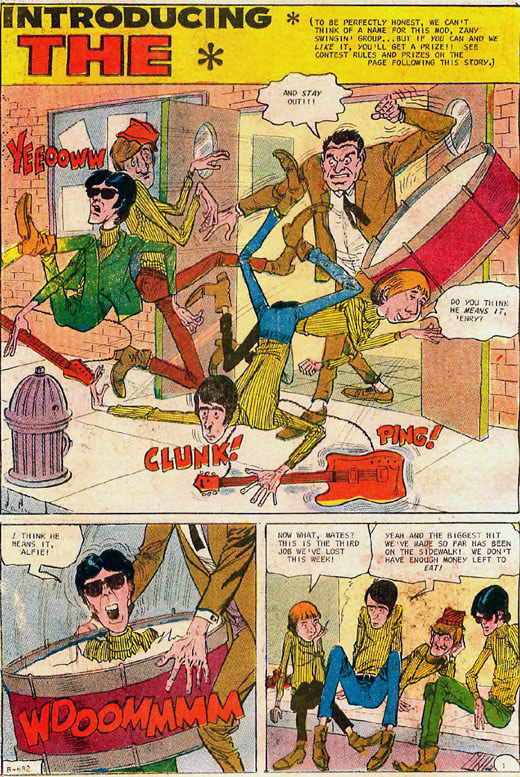 In his comment on the first of these posts, Mark posited that Dick Giordano and company stepped in to salvage Marcus's work on Monkees 1. I still think that Ross Andru was one of that company. I see Marcus's figures in the Dell story (and will admit that the Andru style resemblance there is a coincidence) but just don't see Marcus's style in the faces.

But it sure wasn't José Delbo!

I think Ross Andru is the best guess (made by BrittReid in the last post's comments) for the main penciller of Monkees 1 at Dell. What he was doing there is anybody's guess, and some of the inking (Trapani's) does not help the pencils. However:

Although I first dismissed it as an anomaly, this woman's face above sure looks like one of Andru's, notably in his trademark eyelashes.

And although the Human Scorch is written as a 98-pound weakling to begin with in this story from Not Brand Echh 1 (Aug/67), art by Andru and Mike Esposito, still...
Posted by Martin OHearn at 11:33 AM 3 comments:

The Grand Comics Database credits José Delbo with the art on every issue of Dell's The Monkees. But he had nothing to do with the first issue, cover-dated March 1967 (also appearing in reprint as #17). 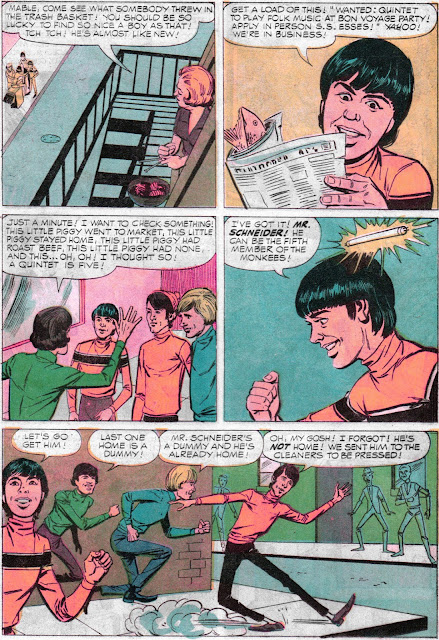 The inking is by Dick Giordano (with probably Frank McLaughlin and Sal Trapani helping out). But who the heck is the penciller? The super-skinniness of the characters may be an attempt at a comedic style and not, I suppose, part of this person's regular style. The attempt to draw some people the way Carmine Infantino would (on a really bad day) is another stumbling block rather than a help. Who is this? 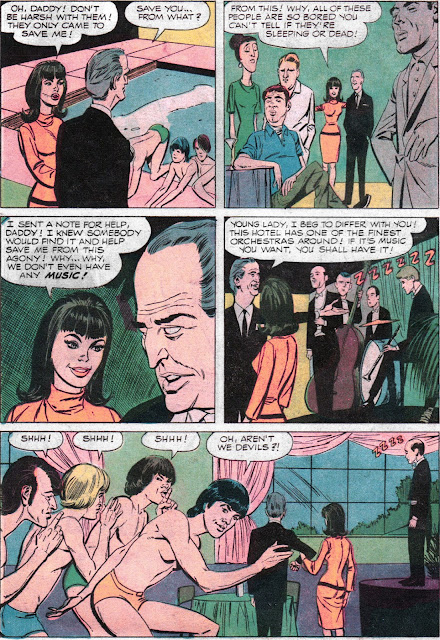 Here, by the way, is a tier of Delbo art from the next issue—quite recognizable as his, and not the first-issue penciller's. D.J. Arneson wrote The Monkees, as he's said.

Superboy and the Captain Future Creatures

Editor Mort Weisinger's recycling of ideas on the Superman feature is notorious: stories were rewritten after the passing of a few years, scripts from the TV show were adapted into the comic books, and even cover scenes from pulps that Weisinger had worked on turned up on the comics' covers.

One instance of reusing a pulp idea that I think I'd credit to the writer rather than the editor is a concept from a Captain Future novel Weisinger edited. It wasn't given an illustration, but here's the prose description from the Winter 1943 issue's "The Face of the Deep" by Edmond Hamilton:

"Each of these big creatures appeared to be composed of small, living fleshy pink cubes. Each cube was four inches square, and had two twinkling bright eyes and a small mouth-opening.

"'Why, I never saw anything like these before,' Captain Future muttered, stepping forward. (...)

"But now, as Captain Future approached, the centipede creatures underwent an incredible transformation.

"Their big, geometrical bodies disintegrated. They broke up into the scores of living cubes of which they were composed. Each cube was revealed to be a separate, tiny living creature. Each had eight tiny claws or legs, one at each corner of its cubical body, as well as its own eyes and mouth and ears.

"These hundreds of cube-creatures scurried swiftly together, and joined into a single big figure. The living cubes joined tightly, each to the next, by instantly hooking their tiny claws together.

"Silently and quickly as though by magic, the cubical creatures had combined to form a towering, semi-human figure ten feet high. It advanced on square, stocky legs with its massive arms raised menacingly toward the Futuremen."

Here's a scene (drawn by George Papp) from "The Super-Planet of Clark Kent and Lana Lang," the Superboy story in Adventure Comics 300 (Sept/63): 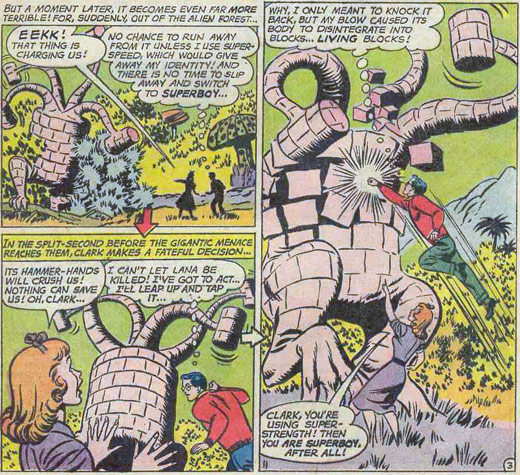 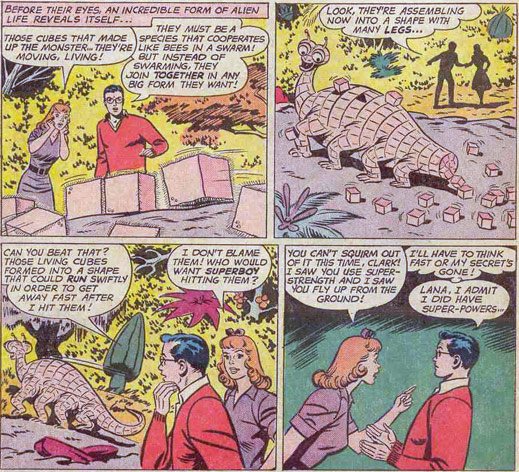 In this case, the sequence goes from monster to centipede creature. I read this story when it came out, and remembered this vividly ever since; it was decades later that I reread it and attributed the script to Edmond Hamilton from the writing style. A few years after that, I read the Captain Future novel by Hamilton and instantly recognized the Cubicals, as he calls them there.
Posted by Martin OHearn at 11:04 AM 3 comments:

Last post looked at Charlton's Holi-Day Surprise 55 (Mar/67) and its art: some by the usual team of Bill Fraccio, pencils, and Tony Tallarico, inks, but some of it the less usual (for the time) full art by Tallarico.

One reviewer credited the entire issue's art to Tallarico (whose cover signature was the only indication of artist), ignoring as usual Fraccio's contribution. But there are two stories neither artist had anything to do with. The monotone coloring scheme obscures the style, but "The Story of Christmas" strikes me as by Luis Dominguez, who started working for Charlton in 1965. 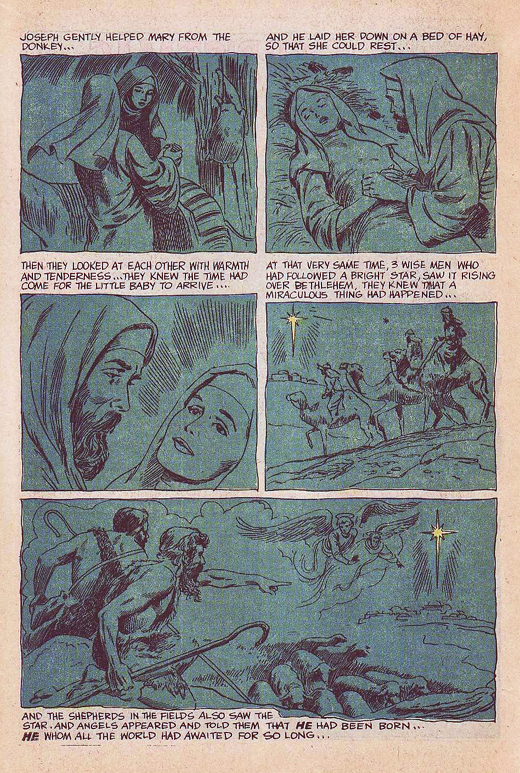 "The Story of Hanukah" at first glance could also be by Dominguez, but the faces of the soldiers, for instance, seem less defined than his usual. I wonder if this art is by Norman Nodell, also at Charlton as of the mid-Sixties. 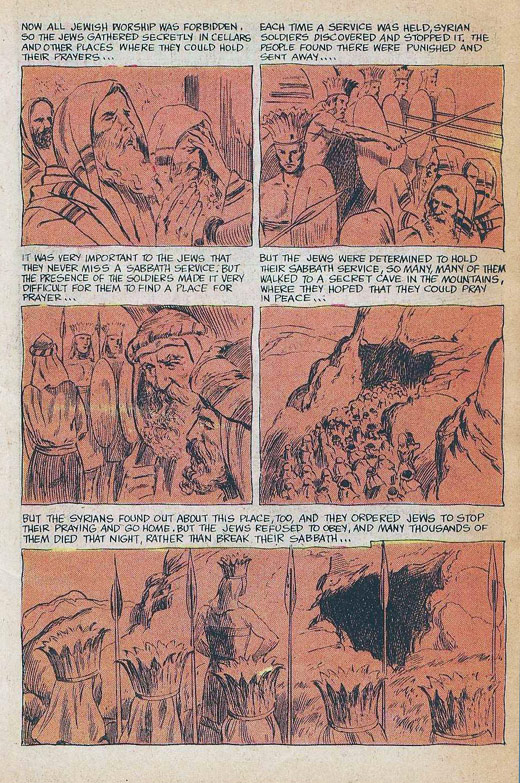 Below is one of the single-page stories in Holi-Day Surprise where I said I saw Bill Fraccio's influence on layouts but not his actual pencils; I'd say the full art is by Tony Tallarico, as in the other filler pages. By the way, Tallarico lettered all his work in this comic, as on so many others. The best I can say about the writing is that it isn't Joe Gill's. 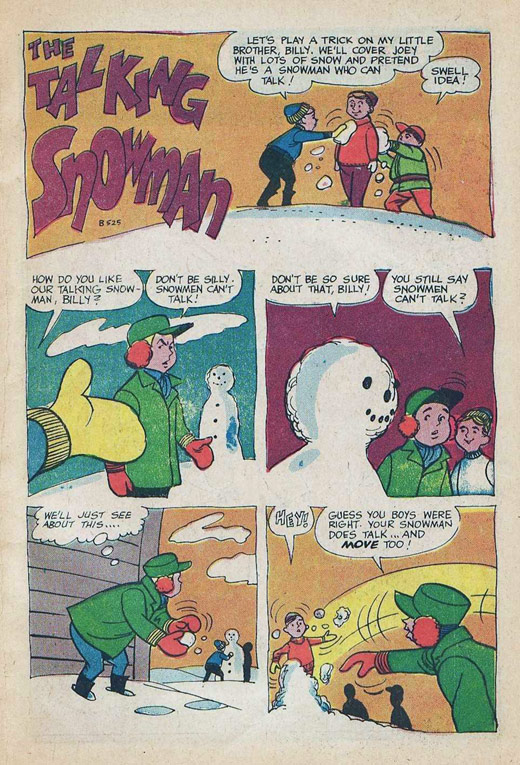 Posted by Martin OHearn at 10:52 AM No comments:

Tony Tallarico With and Without Bill Fraccio

For decades, Tony Tallarico was assumed the penciller-inker of the anonymous work he did at Dell and as "Tony Williamsune" at Warren, and work elsewhere—even though art in exactly the same style at Charlton, on Blue Beetle and Son of Vulcan, was clearly credited to Bill Fraccio on pencils and Tallarico only on inks.

Assuming that Tallarico did do full art at some point, I wondered what his own pencils looked like, and this cover he signed is the clue. It's Charlton's Holi-Day Surprise 55 (Mar/67), the only issue. Some of the interior art is in this poster-like style, and some in the style more usually associated with Tallarico (i.e., pencilled by Fraccio). The puzzles, activity pages, and at least some of the one-page filler stories are drawn by Tallarico solo. 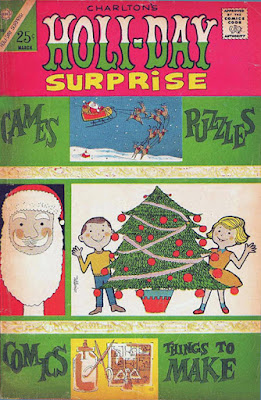 The centerpiece of the comic is a 20-page adaptation of Charles Dickens' A Christmas Carol, and Bill Fraccio pencilled that. I'm not sure if Fraccio pencilled or merely influenced the layouts of some of the filler stories. (Click any of these to see at a better size.) 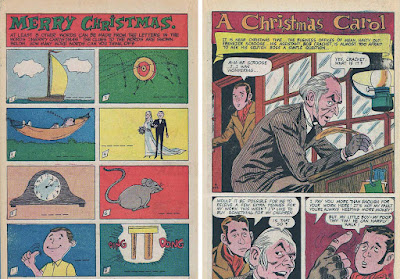 Tallarico's full art on Holi-Day Surprise leads me to another instance, in the era when otherwise he mostly worked inking Fraccio. On Dell's Car 54, Where Are You? 4 (Feb' 63) the main story is by Fraccio/Tallarico, but the non-series backup is pencilled as well as inked by Tony Tallarico. #1-2 carry Car 54 stories cover-to-cover, and the #3 backup is pencilled by Fraccio; but the rest of the backups (#4-7) are by Tallarico. On the ones after #4's, I can see the Fraccio influence on the layouts, but I'm pretty sure it's only an influence when I compare backup to main story. 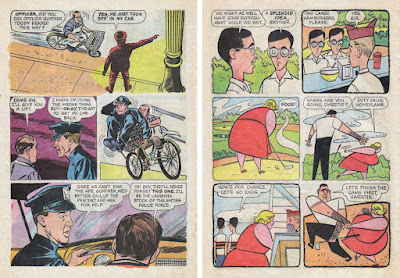 Holi-Day Surprise contains two three-page stories by another artist (or two) that I'll leave to tomorrow.
Posted by Martin OHearn at 4:16 PM 2 comments: