Dick Dillin on (Who Would Have Thought?) Blackhawk

During Dick Dillin's long run across two companies in the Fifties and Sixties on Blackhawk, he had to be spelled only a couple of times. In Blackhawk 210 (July/65) under the usual inker Chuck Cuidera's work (note the close-up in Panel 1), Jim Mooney steps in to pencil, as indexers were quick to notice (see notably the young women in Panel 3, although the men's poses are evidence of Mooney's work too). 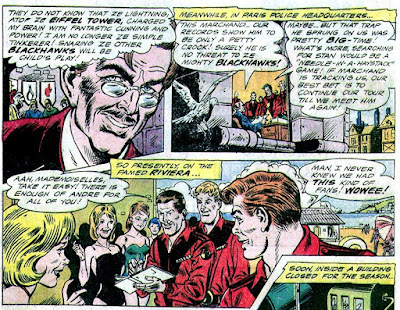 Mooney didn't pencil all of "Danger--Blackhawk Bait." He did Part 2. Part 1 was pencilled by Dick Dillin: 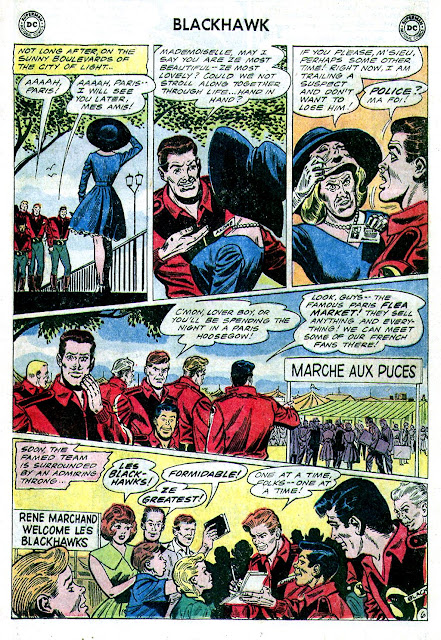 The main Blackhawk writers at this point are Ed Herron and Bob Haney; "Aaaah" and, elsewhere in the story, "Uuuuh", drawn out on the "a" or "u" rather than the "h", pinpoint this script as Haney's.
Posted by Martin OHearn at 12:28 PM 2 comments:

Undercover Spy Writer in the MMMS

In rereading mid-sixties Marvels, occasionally you might look over the list of Merry Marvel Marching Society members in each issue to see if there are any names you recognize with hindsight. For instance, I see Will Meugniot in Strange Tales 143. And then I see a professional writer listed in Strange Tales 148—under his fandom pseudonym (he used his real name on his books).

Ted Johnstone, at the top of the rightmost column, is actually Man from U.N.C.L.E. tie-in writer David McDaniel. So it's appropriate that his listing appears in the book featuring Nick Fury, Agent of S.H.I.E.L.D. When ST 148 (Sept/66) went to press McDaniel's first novel, The Dagger Affair, had been on the stands for about half a year and his second, The Vampire Affair, was just coming out from Ace Books.  It was in his novels, not on the TV show, that the secret history of THRUSH was revealed and in fact its full name: the Technological Hierarchy for the Removal of Undesirables and the Subjugation of Humanity.

(I didn't have to look that up any more than I would the United Network Command for Law and Enforcement, The Higher United Nations Defense Enforcement Reserves, or Supreme Headquarters, International Espionage Law-Enforcement Division, but I can't get any further on SHIELD's gritty, with-it, "up-to-date" new name [twenty years now?] than Strategic Homeland blah blah blah blah.)

In the U.N.C.L.E. novel that McDaniel wrote to end the series but that Ace declined to publish in 1971, The Final Affair, one character, a motorcycle gang member, is nicknamed The Thing and shouts "It's clobberin' time!" And at one point Mr. Waverly refers to THRUSH as "that Hydra-headed bird."
Posted by Martin OHearn at 12:48 PM 5 comments: