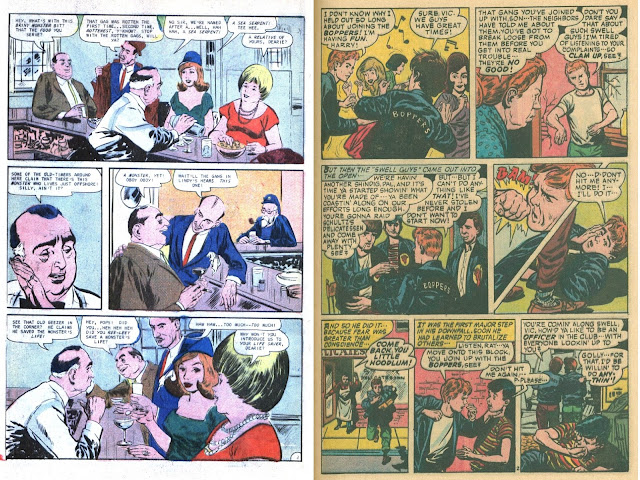 "Yesterday's Monster" in Charlton's Strange Suspense Stories v2 #1 (October/67), from which comes the first page above, is credited to Mary Poppin Fink. (I can't help wondering if the story's writer, Denny O'Neil, contributed the name.)

Responding to my previous post, Jake Oster by email and darkmark in a comment wondered if the artist on the very first Rang-A-Tang story at MLJ might be Edd Ashe, who's listed in the Who's Who as doing the feature in 1939-40. I don't think so after comparing the old-fashioned cross-hatched style of that story with Ashe's contemporary signed work at MLJ.

But speaking of Ashe and the Who's Who, it says he had work in Strange Suspense Stories from Charlton in 1967--that would be "Yesterday's Monster." The second page above is from "Spirits Can be Good Joes," credited to Ashe as full artist in ACG's Forbidden Worlds 133 (Jan-Feb/66). I could take Charlton job as pencils only, as per the WW, but with no idea of the inker.

The Who's Who actually gives all sorts of credits to Ashe at Charlton in the 60s that I haven't stumbled across yet, mostly on anthology stories. He's supposed to have done Space Adventures in 1967 too, which led me to look at the story drawn by Spoonerized jazzman "Melonious Thonk" in #60, but that's in quite a different style. (It too was written by Denny O'Neil, and again I'd suspect he christened the artist.)
Posted by Martin OHearn at 12:23 PM 3 comments:

Who Wasn't the Artist on Rang-A-Tang?

The Rang-A-Tang the Wonder Dog story in MLJ's Blue Ribbon Comics 1 (Nov/39) is bylined "By Norman Danberg." In a number of the comics of the time, it can be difficult to tell if the artist or the writer is being credited. Here I'll disagree with the Grand Comics Database; this is the writer.

Norman Danberg could have been a writer-artist like fellow pulp/comic book man Joe Archibald, but I don't think so. Danberg is better known as Norman Daniels; he wrote under many pen names in the pulps, and wrote paperbacks under both his own name and with or under the name of his wife Dorothy Daniels.

The fact that the art on the illos in Blue Ribbon 1's text story,"Death around the Bend," is identical to Rang-A-Tang's doesn't make Danberg that artist either; a so far anonymous artist did both, as well as #2's Rang-A-Tang story and both issue's covers.

In Chesler's Star Rangers 1 (Feb/37) the strip "Ghost Riders" is bylined "By Norman Daniels"; it's not until the third-to-last panel that this story's artist (W. M. Allison, the cover artist) happens to sign his name. The GCD leaves out Allison's credit, but does read this byline as saying Daniels is the writer. The GCD treats Danberg and Daniels as separate people.

One miscredit for Daniels in prose work has lasted some fifty years now; it slipped handily onto the Internet, so it will no doubt last forever. He's supposed to have been one of the writers of Doc Savage.

Will Murray put paid to that in the late Seventies. Somebody who'd seen the Street & Smith payment records had conflated the Laurence Dovovan on them with the better-known Norman Daniels. On DocSavage.org you can still see "Laurence Donovan (alias Norman Danberg)". The original fan explanation was that "Danberg wrote his Doc Savage novels under the name Laurence Donovan." Stop and think about that for a moment. The Doc Savage novels were, of course, written under the name Kenneth Robeson! As Murray pointed out when he showed that Donovan was in fact Laurence Donovan, Daniels did write backup stories for the Doc Savage magazine, and did swipe a Lester Dent Doc Savage, Devil on the Moon, for his Avengers (Steed and Tara King) novel Moon Express. That didn't make him a Doc Savage writer.
Posted by Martin OHearn at 10:33 AM 2 comments:

Shortly after my posting on the Joe Orlando-edited issues of Girl's Love Stories, Robin Snyder emailed me:

Here is a mystery to ponder as you look over these additions and corrections: Girls' Love Stories lasted a long time without any support from the fans. How is this possible?

Mystery #2: This success story does not appear in The Wall Street Journal, Comics Journal and others and is barely, rarely or never mentioned in the histories of the comics? How can this be?

If a tree falls in the forest and there is no one in the media to report the event...does this mean it never happened?

Joe Orlando, like most editors, kept poor records and they are as reliable as those from any other editor. (Only Boltinoff kept accurate records as far as I can tell.)

I have an accounting of Joe's records. Many of your identifications match his. You and Nick Caputo know your names and ID.

There are exceptions and I have noted them in the following.

I have also made a few additions for features you omitted. 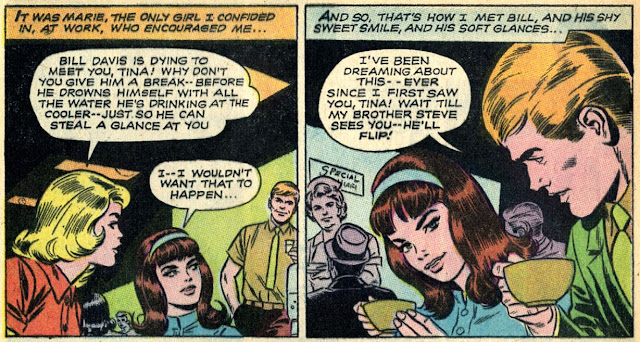 I've reworked the list Robin sent into my format. Here are the additions, as well as the corrections with which I'm updating the post itself. Robin gives a number of writing credits for Barbara Friedlander and Carol Fein, neither of whom appeared in the post. "From Barbara Miles with Love" is the romantic advice text page. There are two separate "Dates" pages in #147.

SangorShop commented on the post with info from the records for #157, and I'll repeat that I certainly should have seen Ric Estrada's pencils even under Tony DeZuñiga's inks; Estrada lettered the title in his distinctive style, as he did for many of his stories. (The GCD got this credit mixed up with "For Love or Money" in #153, but that's DeZuñiga solo.)

Below this list, for the sake of completeness, are a few more credits Robin sent from the records that I'm not incorporating into the original post.

UPDATE: Scruggs on "Scrapbook of Tears" is, at this late date, just a tantalizing surname in the records, but a possibility would be Wilson Scruggs, whose syndicated strip "The Story of Martha Wayne" lasted from 1953 to 1962.


The credits below, in my opinion, point out Robin's caveat about the reliability of the records. The evidence of the story itself shows that Win Mortimer penciled "Love Today--Cry Tomorrow" in the art above; note the brunette girl's face in both panels. Likewise the first episode of "Confessions" looks just like the other episodes--full art by John Rosenberger.

SangorShop recalls John Calnan as working for Murphy Anderson at one point; Anderson's getting the payment to pass along to Calnan would explain the latter's name not appearing in the records for these two stories in #155 and 157. The first "Uptight" in #157 is signed by Lee Elias.