And He Drew the Blonde Phantom, Too 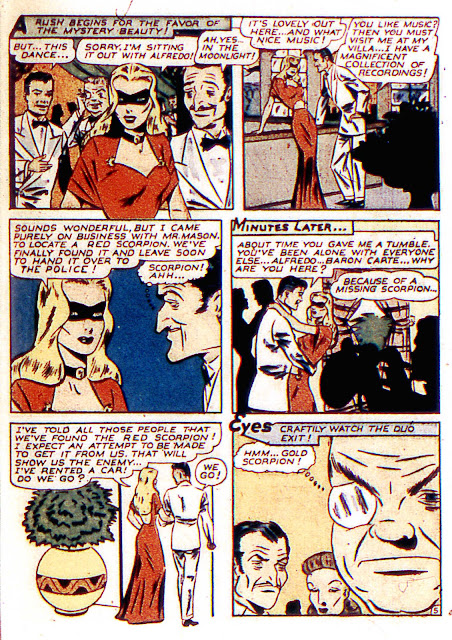 In the Blonde Phantom's first issue at Timely (All Select 11, Sid Shores pencilled the first BP story. I guess the inks (by someone I won't try to ID) made the art in the second story look superficially like that of the first. But it's pencilled by Pete Riss, artist on (to name only other female protagonists) Millie the Model, Mary Marvel, Toni Gayle, and ACG romance stories. He also pencilled the second story in the next issue (keeping the numbering with a title change, Blonde Phantom 12).


The writer who created the Blonde Phantom in the two stories in AS 11 is one of those frustrating comic book mysteries, as I can follow the style from story to story without being able to name him (or her)—he also worked on Sub-Mariner and Human Torch, and the first of the crime anthologies, in 1946-48. He uses "crimester" for "gangster" and adjectivizes time in the captions: In lightning seconds, In split seconds, In speedy seconds, Swift moments later, and even A splash second later! The one name I can put to him is "not Stan Lee."

UPDATE: In reference to the preceding paragraph, Jake Oster has brought to my attention Alan Sulman's words in Alter Ego #104: "I created a new character called The Blonde Phantom, and I wrote those strips myself. I wrote a few Sub-Mariner and Captain America stories. I did not write The Human Torch." If he wrote the first BP stories, (recall that William Woolfolk was on board by the second issue) I can't reconcile that with his writing no Torch stories. Sulman's story "I Hate Me" in BP 15, credited in Stan Lee's Secrets Behind the Comics, is a four-pager with only three captions, and doesn't give much upon which to build an idea of his style.
Posted by Martin OHearn at 10:31 AM 2 comments: