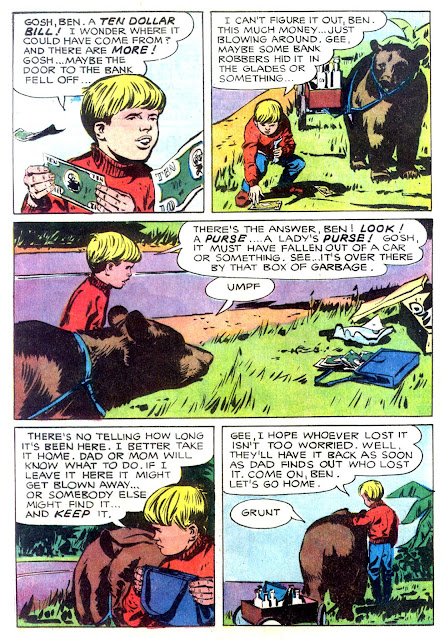 The art on Dell's TV tie-in Gentle Ben is an interesting progression across the issues: Henry Scarpelli on #1, José Delbo on #2, Scarpelli inking Delbo on #3—and then on #4 someone who was not the Dell stalwart that they were. The name of the mystery artist fell into place when I came back to look at that issue after finding Carl Pfeufer at Dell on one 2-issue title: The Courtship of Eddie's Father.


All the stories in the 5-issue run (the last one a reprint, because of course Dell) of Gentle Ben were written by D. J. Arneson. His trademark "Great Scot" is in a few of them, and his use of ellipses instead of hyphens in stuttered words—"B...but" rather than "B-but"—in most.
Posted by Martin OHearn at 12:45 PM No comments: