Two Who Drew Lance O'Casey and One Who Didn't 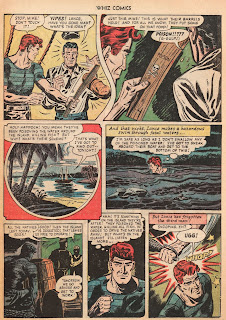 After a 49-issue absence from Whiz Comics Lance O'Casey returns with #103 and art by Louis Cazeneuve, recognizable from his work on Boy Commandos, Seven Soldiers of Victory, and so on at DC. There's another artist, whom I can't ID, and the next along is Clem Weisbecker, whose Fawcett movie comics I listed in my previous post. The run from #132 to the end, #155, is said to include Charles Tomsey art, but I haven't got a handle on his style.

The Grand Comics Database has attributed the Lance O'Casey stories in #119, 123, 125, and 128 to Dick Dillin. I can see why a reader could be reminded of Blackhawk art, but Weisbecker's trademark long square faces do show through under different inkers on the different stories. Shown is a page from "The Poisoned Sea Mystery." Suffice it to say that the inking on the four O'Casey stories mentioned above is no more Dillin's than the pencilling is.

Issues not listed here between #103-131 do not have Lance O'Casey stories.


The Grand Comics Database has credited Cazeneuve with some of the Whiz issues listed but mistakenly on Golden Arrow instead of Lance O'Casey (not that I can give a name to the GA artist at this particular point).

Posted by Martin OHearn at 10:00 PM No comments: