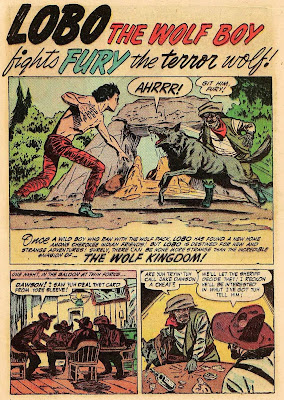 Since William Woolfolk didn't have any Pinhead & Foodini stories in issue 1, I'm assuming his gag pages for the title didn't start in that issue either. He writes three set of gags in this and later months, fitting into the final three of the four issues.

The Lobo story is another case where the editors have changed Woolfolk's title at the page top, with the logo, but let his version remain at the end of the blurb below.

There's a Mistake You Don't See Every Day, Chauncey

I was going to post this page from Eerie Tales 1-and-only merely to showcase the howling error of a sort I can't recall seeing anywhere else (but then, I haven't read every comic book published). Then I realized I had an art attribution differing from one of the GCD's for this issue (in fact, for this story). 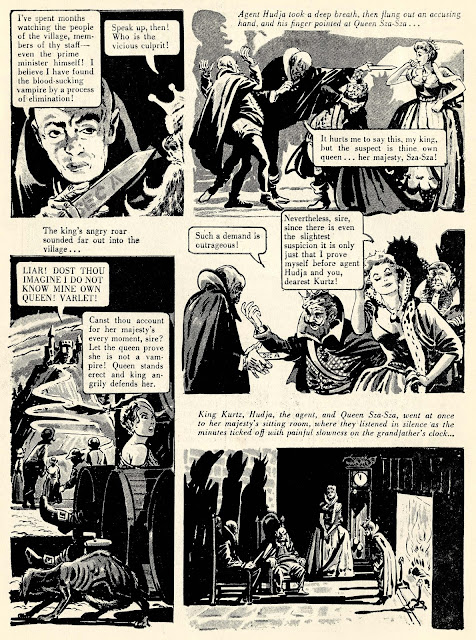 Eerie Tales predated Creepy by half a decade. Michael T. Gilbert unearthed it in Alter Ego, and later Joe Simon confirmed editing it. The magazine itself presented only joke editorial credits, just as a number of humor B&Ws did at the time, and was published by the otherwise unknown Hastings Associates (just as DC later published the two short-lived Kirby magazines as Hampshire House, for the sake, one supposes, of plausible deniability).

Gilbert, Hames Ware, James Vadeboncoeur Jr., and Dr. Michael J. Vassallos pored over the artwork for attribution; I pass along their credit of Ken Battefield on "Shroud Number Nine," who would never have occurred to me. They guessed at Bob Powell for the "The Suckspect" (pictured). Bob Powell's story later in the issue, "The Unbeliever," shows his style pretty unmistakably; "The Suckspect" doesn't, to me. Those gray washes don't help art-spotting! But look at the leftmost figure in the second panel, for instance; that's where Joe Orlando's work shows best on this page. The four art experts did suggest assistants helping on this story's art; I can't disagree with that.

Just before posting, I found a comment on Harry Mendryk's Jack Kirby Museum attributing every story in this and its the predecessor one-shot title Weird Mysteries to Carl Wessler; here's where I stood when I composed this post: "From the Greyble to the Grave" jumped out at me as a Carl Wessler script at the climax, when the protagonist screams "Nyaaaaa!" "The Stalker" ends up more or less in the same place as Wessler's "The Night I Watched Myself Die" (The Unexpected 105, Mar-Apr/68, DC), although otherwise they're two very different stories (and the later one moreover makes sense). He may have written "The Suckspect" and "Shroud Number Nine;" if he wrote "The Unbeliever," I'd say it was rewritten. (From the comment by Rick on Harry's blog, I take it that all of these stories are indeed in Wessler's records, although the CGD entry credits no writer at all.) UPDATE: Robin Snyder informs me that Carl Wessler's account book does not include those three stories. It also omits "Shocked to Death," so that argues against my thinking I see his style there; I've added question marks to that credit below. On the other hand, the records show that Wessler wrote the issue's text piece, "Frozen Stiff," which was meant to be continued in the never-published issue 2.

There was a question of whether the morgue keeper in Eerie Tales, unnamed in the stories, is technically Morgue'n from Weird Mysteries (which I'd love to see in total). He is; his name is on the morgue wagon in the cover painting.

Posted by Martin OHearn at 10:11 AM No comments: 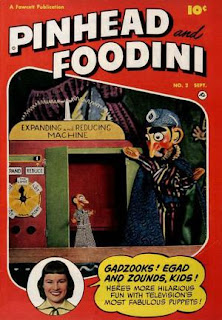 And now for something fairly different: the TV tie-in Pinhead and Foodini. (Not completely different; William Woolfolk wrote a few stories of the radio tie-in comic Land of the Lost.)

Fawcett, Orbit, and Quality are the publishers this month.

These three love stories were plotted for Dorothy Woolfolk in the shorter page lengths and were published at the longer lengths corresponding to her scripts.

Posted by Martin OHearn at 1:56 PM No comments:

Wally Wood has gotten the attribution for writing the first three issues, just as Jack Cole has for all his Plastic Man stories, but with no better reason than that he wrote some of his own work elsewhere. Could Wood have brought the concept and plots to Gold Key? Very possible, but who can say? The "new writer" finally identifies the invaders as extraterrestrials, which supposedly proves a point, but he doesn't do it in issue 4, the first with the new artists; he works his way up to confirming the fact in #5.

Here are tiers from issues 3, 4, and 9. Do you notice a similarity in writing style? There's also Dorfman's use of captions beginning with "As" quite a bit, and at least one siren going "Howeee." 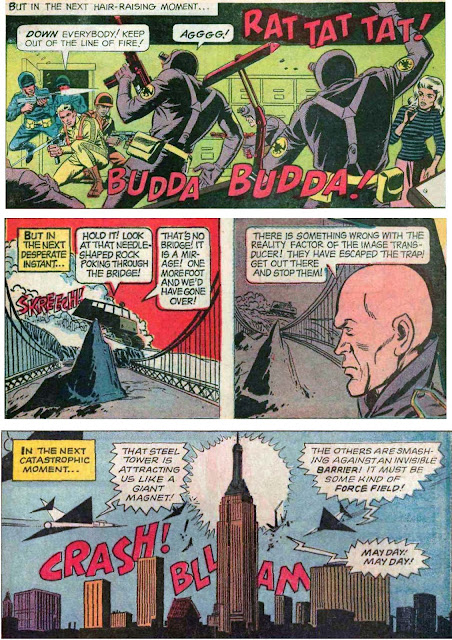 I'm not sure exactly how the Wood/Adkins art was broken down: if one did layouts, one complete pencils, one complete inks; or more likely nothing so clearcut. And of course others may have helped. The inks on the remaining issues seem to me to match up with Mike Peppe's on, say, Mike Sekowsky's pencils on Man from U.N.C.L.E. Most often Roy and Peppe worked as a team, like Andru and Esposito—but the only signature in the series, on the splash page of #10, is Roy's alone.