To expand pictorially on what I mentioned in the last post's comments: in the DC/Fawcett lawsuit in the late Forties, Manly Wade Wellman proved that he was an early Captain Marvel writer, even though he had no credits in the comics, because in Captain Marvel Adventures 1 (1941) he had sneaked in his name in the word balloons.

I've found this mentioned in a number of places, but I haven't found an illustration of the claim. Here are the first lines of each panel's first balloon on the first three pages of CMA 1: 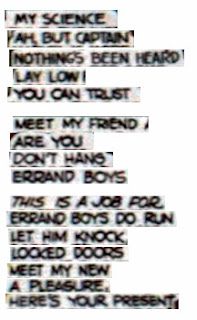 Note that the acrostic actually spells MANLY MADE TELLMAH; his sneak was messed up by editorial rewriting in some panels. I've shown  the first tier of panels above; to make this work, we have to assume that the inset in the second panel was material included in the first panel in the script.

Joe Simon also testified at that trial, as he and Jack Kirby supplied the art. Part of his testimony included the fact that they worked from Fawcett's scripts—and despite that, to this day the writing of CMA 1 has been attributed in places like the DC Archives reprint to Simon.

The point of Wellman's testimony was that he was instructed to copy Superman. But that reads, in the retellings at least, as his being instructed to copy Superman before Fawcett ever first published Captain Marvel—his writing Captain Marvel Adventures 1 showing that he was "in on the beginning" of the character because, you know, #1. That Cap debuted in Whiz Comics a year earlier goes unmentioned.
Posted by Martin OHearn at 4:28 PM 7 comments: 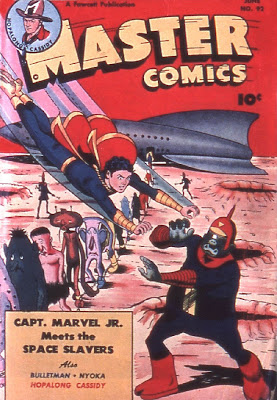 Fawcett and Quality are William Woolfolk's known publishers for this month. I don't know who bought the two true-crime stories that he left undescribed in his records; they were paid at two different page rates.

Possibly last month the editors asked Woolfolk for an 11-page Kid Eternity script for Hit Comics, then found they had greater need of a 14-pager when a Kid Eternity issue's deadline loomed.

My Tom Mix ID is purely a guess; this is the closest-matching title in the timeframe of the other Fawcett stories here. I had to get the title from an Ebay auction; if there's an index of Tom Mix Western, I can't find it. The Ebay auction didn't mention the page count.

Emergency Doctor 1 (Sum/63) is a Charlton one-shot in the medical genre of their ongoing series like Nurse Betsy Crane and Three Nurses. The TV show "Ben Casey" was a strong influence, though—so strong that they used Ben Casey's artist. 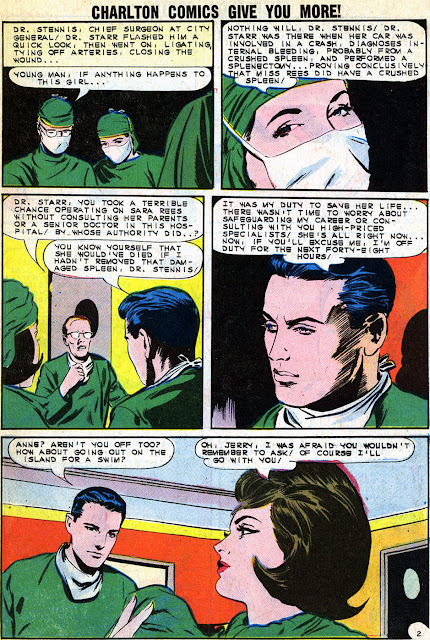 As I said in my Ben Casey post, writer Carl Memling's ambulance sirens go "Rowrrr." When I saw that Nodel had drawn Emergency Doctor and that its sirens went "Rowrrr," my first thought was that Charlton had acquired an unused Ben Casey and had Nodel lightly redraw Vince Edwards' likeness. But the lettering in the Charlton machine style shows that this wasn't a Dell job changed with no more than a few brush strokes.

In fact, the script is by Joe Gill. He uses "Rowrrr" elsewhere for animal roars; by coincidence he uses it for sirens here. Did he rewrite Dell pages, which were then relettered? I don't think so; the number of pages in the issue's two Emergency Doctor stories don't match the fuller-length no-ads Dell standard. More tellingly, Emergency Doctor, along the lines of the nurse books, concentrates on an ongoing doctor-nurse romance that isn't in the Ben Casey comic because it isn't in the TV show.

Speaking of Joe Gill, from what I've seen he did write the vast majority of Charlton stories in the early Sixties. (Carl Wessler had written there in the Fifties, and the newbies like Dave Kaler, Steve Skeates, and so on, would come aboard in the mid-Sixties. I think Pete Morisi was writing his own stories before the mid-Sixties; I don't know Don Segall's tenure.)

One of Gill's stylistic tells is his long introductory blurbs with a number of sentences strung together with conjunctions. It seems counter-productive, when he was getting paid by the page, not by the word, but my theory is that it actually helped him in the long run. Joe Gill has said that he plotted as he typed (at his page rate, he had to). Getting started on the script with a flow-of-consciousness description of the set-up may have been a way of jump-starting the plotting process, to keep his mind a panel or two ahead of his fingers.
Posted by Martin OHearn at 10:31 AM 2 comments: 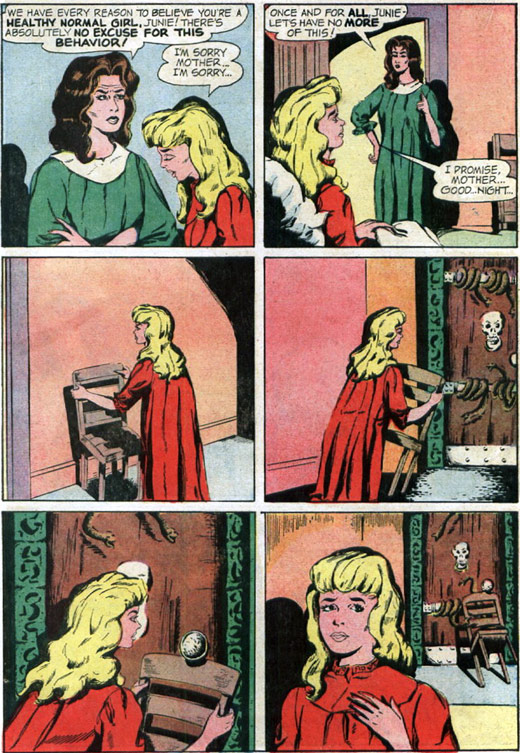 Posted by Martin OHearn at 4:44 PM No comments: 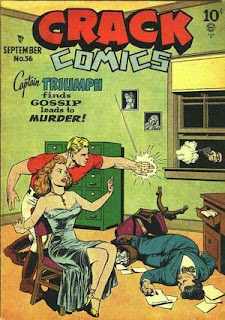 Back to the William Woolfolk records—Marc Svensson, who scanned the pages of Woolfolk's sales notebook thanks to Donna Woolfolk, has consolidated his scans, and so now I can fill in the years that I had skipped, from the late '40s and early '50s. Click the Woolfolk Records label below to see all the previous entries.

Fawcett, Quality, and Timely were the writer's publishers this month. The true crime story I can't track down was paid at the same rate as the Human Torch stories, so might be in a Timely comic.

Bold indicates my additions (Woolfolk didn't enter the publication data of the stories, which is our interest now). Possibly the Timely editors saw the writing on the wall (by 1949 they'd stop publishing the superheroes) and started adjusting scripts to fit any upcoming slots—not only cutting script pages but reworking characters into others. Woolfolk wrote the additional 3 pages of the Kid Eternity script next month.