A while ago I listed some of the teenager scripts that Jack Mendelsohn reworked at Tower from ones he’d written at Quality a decade earlier. One such pair was "Disc Jockeying" in CANDY 49 (July/54) and the story by the same title in GO-GO AND ANIMAL 2 (Oct/66). Now I’ve found an earlier source for the plot at DC--the untitled Liz story in SCRIBBLY 1 (Aug-Sep/48). They're in chronological order below: Liz, Candy, Go-Go. The heroine in each has thrown a platter party to replenish her record collection and every guest has brought a single with the same song. 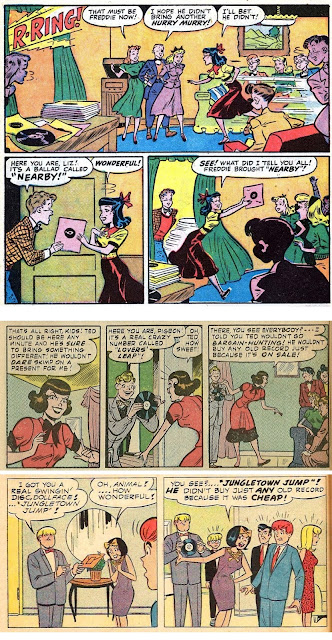 The Go-Go script reworks the Candy one closely, but they don’t resemble the Liz one aside from the plot. Jack Mendelsohn was working at DC in 1948, or at least for Howie Post there, on Presto Pete and Jiminy and the Magic Book, but I can’t see any of his style in the Liz script.
Posted by Martin OHearn at 9:09 PM No comments: 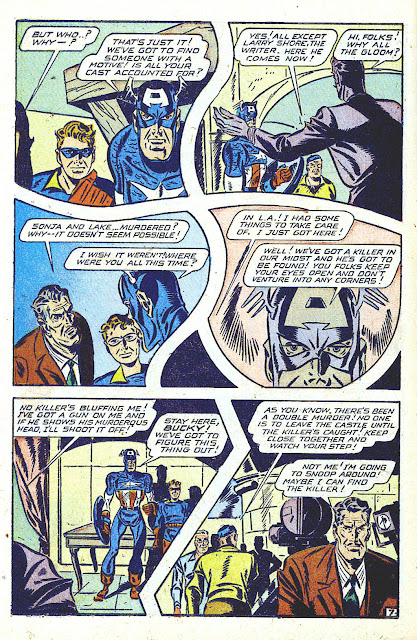 Clem Weisbecker's handful of stories on Captain America are important because, of course, Captain America, and because they're a link between his earlier work at MLJ and later at Fawcett. (Another link is his late-Forties stories in Crime Must Pay the Penalty, at Ace, which have already been identified by James Vadeboncoeur, Jr.)

The page above is from "Scarface and the Script of Death." Some issues in this timeframe are online only as scans of old microfiche rather than of the actual comics, and the fuzziness makes it difficult to scrutinize the art. Inherent in the comics themselves is the number of different inkers. So Weisbecker may have more Cap stories, but these are the ones I can be sure enough of to list now, and not take another few weeks vacillating over some of the other stories.


on Captain America in
ALL SELECT