From the Burt Frohman Collection

As a writer Burt Frohman (he was an artist earlier) kept records by filing away his comic-book scripts with copies of the issues they were published in. The Who's Who lists some issue numbers like Strange Tales 22 and Uncanny Tales 12 at Atlas; the Grand Comics Database gives the specific stories for those issues--respectively "What Happened on the Moon?" and "Dead End." The info in both the WW and GCD comes from Frank Motler, who cites the actual comics and scripts from the Frohman collection. 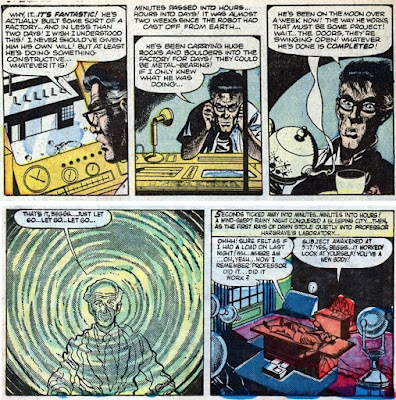 Among the issues listed in the Who's Who are Atlas's Men's Adventures 22 and 23. Going by "What Happened on the Moon?" (first tier) I was able to pick out one of the MA stories. Compare the captions. I couldn't find a story of his in #22, and wonder if his contribution is the text piece, inasmuch as he did them as well as full-length stories and single-page featurettes--see below.


The Burt Frohman collection having been sold off, some comics in it have shown up online, and the scripts included are a part of the cachet, so some pages of them are shown too. davet75 has posted purchases on this message board--scroll down to the Hand of Fate cover. The Indian Braves issues are on eBay; the auction for #1 mentions three scripts but only gives photos of  two.

These series are both from Ace. Editor Alan Sulman changed Frohman's titles, and in fact changed the name of the series hero in the first story in Indian Braves from Lone Eagle to Green Arrowhead; Frohman then used that name in the script for #2.

The Hand of Fate