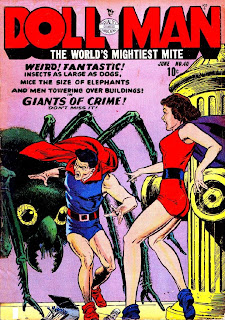 This is the last Monte Hale story William Woolfolk writes. I'm pleasantly surprised that I could identify the publication of as many as 14 out of the 35 in these records, considering that Hale's comics haven't been extensively indexed. (darkmark identified the 15th through 18th.)

There was only one Dr. (not Mr.) Science story published, one explaining rockets written by Otto Binder, in CMJ 108, Apr/52.

Posted by Martin OHearn at 10:24 AM No comments: 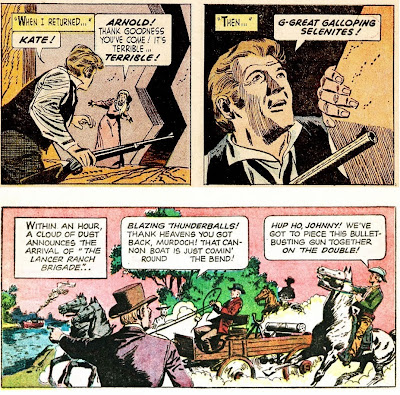 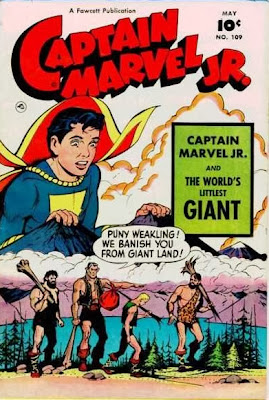 As regular readers know, William Woolfolk kept ongoing records of writing and selling comic book scripts in the late Forties and early Fifties. The notebook pages were scanned awhile ago by Marc Svensson, with the cooperation of Donna Woolfolk. I've tracked down the dispositions of the scripts—the published titles and issues of publication—and added them in bold.

The publishers of this month's stories: Quality, Orbit, and Fawcett.

UPDATE: darkmark found the over possessive gal story in Love Journal, in which title I suspected it lurked, in the publication month I guessed it would fall in.

Who Was Going to Play the Role of Gulliver?

Dell's Gulliver's Travels 1 (Sept-Nov/65) was scripted and drawn as a licensed property, but then the license was lost to Dell or dropped by them. My only evidence is in the comic itself.

An animated-cartoon style for this comic seems an odd choice when Dell did other such classic story one-shots with art by the likes of Jack Sparling. Lemuel Gulliver's short proportions are the first odd thing I noticed. But when eventually I zeroed in on the thicker ink lines on Gulliver's face throughout, I realized he'd been redrawn, and then the nickel dropped. 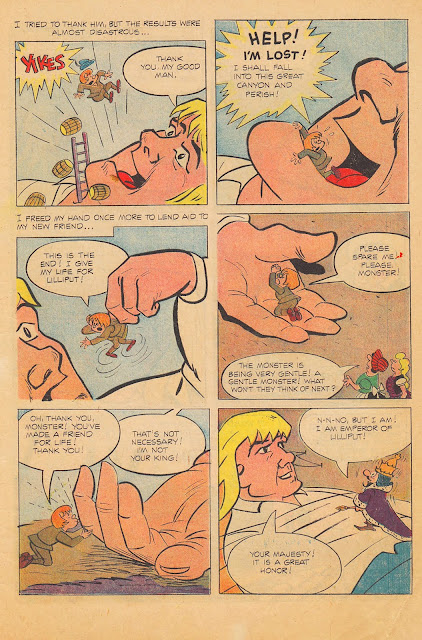 Gulliver was drawn, at first, as Quincy Magoo.

Magoo's cartoonishly bulbous nose has been replaced with a more nearly realistic one and the bags under his eyes gotten rid of. But the one time an ear is seen under Gulliver's long hair, it's Magoo's—the top is folded down—and his jowls and chin are still obvious. The cover Gulliver's face doesn't much resemble the interior Gulliver's—his chin is not at all as pronounced; the cover was no doubt drawn after the licensing fell though.

The 1962 TV special "Mister Magoo's Christmas Carol," in which he acted the role of Ebenezer Scrooge, was successful enough that after the special's 1963 repeat "The Famous Adventures of Mister Magoo" came out as an ongoing primetime series in the 1964-65 season. Magoo (probably wearing contact lenses as an actor, as his nearsightedness was not in evidence) played such characters as D'Artagnan, Gunga Din, and Victor Frankenstein. Dell's Gulliver's Travels was published after the last of the original episodes was shown in 1965, but it had to have been begun as a tie-in to the show. Magoo never played Gulliver on the series; the comic was an original story in that sense.

The fact that the artist of Gulliver's Travels drew Dell's Mister Magoo numbers 4 and 5 two years earlier is obscured by that facial retouching but is, I think, evident in the supporting characters.

I wonder if the artist was someone moonlighting from Dik Browne's studio or Mort Walker's, or with some other syndicated connection. The fact that the Grand Comics Database credits the coloring on Mister Magoo 4 (June-Aug/63) to Kelley Jarvis, who wasn't born until 1966, leaves me uninclined to take its second-hand artist guess seriously. For the record, it passes along a credit from a reprint (which I imagine Jarvis did color, decades later), a credit to J. R. Chilly, whom I take to mean Dell's art director, John Chilly (as he's named in the Who's Who).

UPDATE: Mark Evanier suggests longtime Mort Walker assistant Bob Gustavson as a possibility, and I think that's exactly who drew Mister Magoo 4 and 5 and Gulliver's Travels.
Posted by Martin OHearn at 10:16 AM 2 comments: 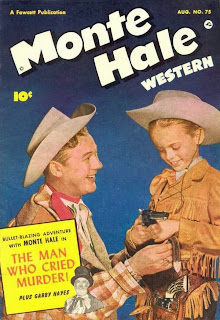 Captain Marvel Jr. 108 is the point in the Grand Comics Database records at which my William Woolfolk CMJ credits from his writing style came from a run I'd seen on Jerry Bails' microfilm.

I can't find "Sky High Witness" in Wanted, the book for which, judging by the pay rate as well as the genre, it was intended. A few Orbit scripts were held back for rewrites (Woolfolk will note rewriting some himself), and the magazine's cancellation may have come before this one was judged ready.

Posted by Martin OHearn at 10:23 AM No comments: