Now that I've seen all the Four-Color movie issues, I believe this is close to a full listing of Leo Dorfman's scripts on them--a handful out of the grand total of over a hundred produced by Western before the numbering ended in 1962. (I don't find any Dorfman movie comics after the switchover to Gold Key.) 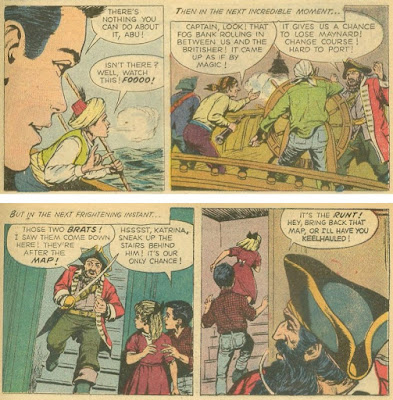 These tiers from "The Boy and the Pirates" (art by Tom Gill) showcase a typical Dorfman caption: In the next frightening moment... and the like. In this issue he uses Just then... a couple of times, and a number of captions beginning with As.

I've mentioned before how an early-Seventies Murray Boltinoff letters page referred to "The Vikings" and others as "classics in comics," instantly leading fandom to conclude that Dorfman had written for Gilberton when it was Western and Fawcett he did movie adaptations for.