Here's a book based on a comic strip by Bob Kane before Batman. The Gottfredson-influenced "Peter Pupp" appeared in the early Jumbo Comics in the 1937-39, supplied by the Eisner-Iger Syndicate. 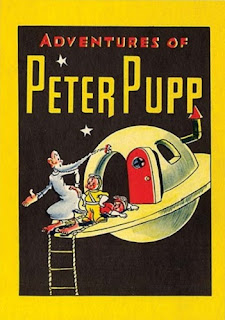 The children's book Adventures of Peter Pupp (Play Action Books) came out in 1944. The writer and artist were Iger staff members: writer Ruth Roche (whom most probably remember as the adapter of Frankenstein in Classic Comics) and artist David Icove.