Nowadays I can't compare this artist's work to any of what he did on Superman, because on the Grand Comics Database the Jerry Siegel records at one remove of the Shuster Shop work seem to be disappearing Ed Dobrotka from the feature and replacing him in the history books with the mistakenly mentioned Sam Citron.

Well, Dobrotka also worked on the Seven Soldiers of Victory at DC, and Captain Triumph and Betty Bates at Quality (Sam Citron worked there too, but on different features and later, in a style recognizable from his credited stories later still at ACG). Here is art from the Betty Bates story in Hit 40 (May 1946) to compare with panels from DC's radio show tie-in title Mr. District Attorney—ones from "The Million-Dollar Racket," "Station K-I-L-L," and "The Case of the Fat Crook." A very different inking style almost suffocates the pencils on Mr. District Attorney; still, art-spotters have discerned Dobrotka's style underneath, but—sigh—misattributed it to Citron. 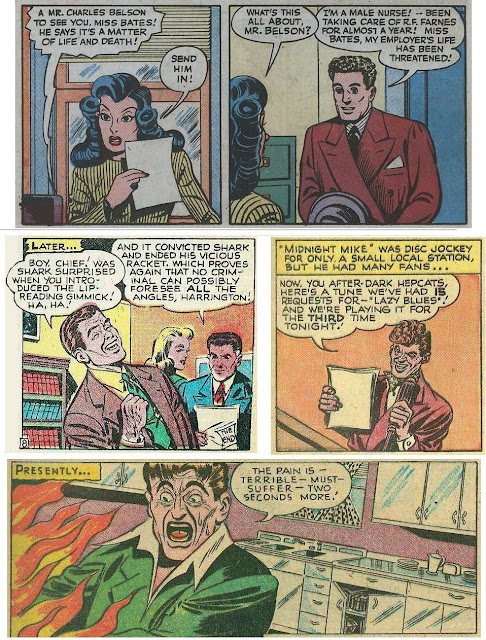 France Edward Herron's scripts are distinctive enough to jump out at me while I'm primarily looking for the artist.

Posted by Martin OHearn at 10:33 AM No comments: