Simon & Kirby swept in and out of Charlton in 1955 with a handful of comics—some out of inventory from Prize, but some original. With From Here to Insanity Jack Kirby took over an established title for its final issue as a four-color comic. 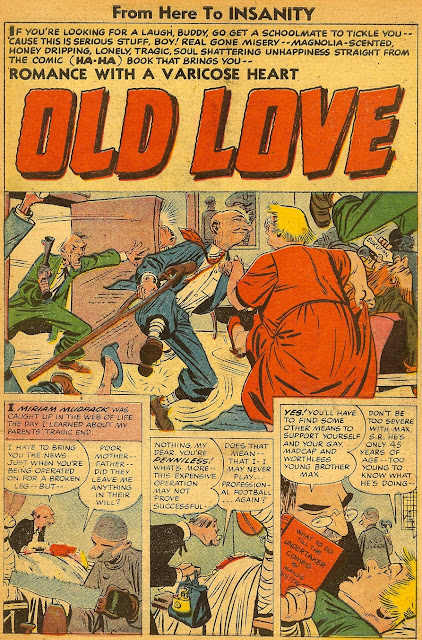 On Black Magic, earlier, Bill Draut's art doesn't let much of Kirby's putative layouts show through, but on this story (above) it does—even more so on later pages.

"Dorothy and Digby" is left over from the previous issue's staff. Fred Ottenheimer did "Meanwhile, Back at the Ranch House" and "Cristofer Clumsiness" in #10 as well as stories in earlier issues. He initialed the splash page detailed below. 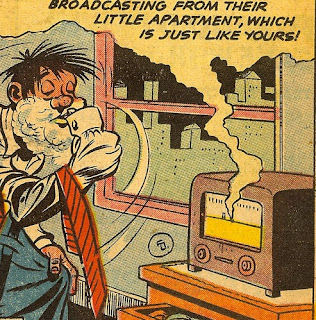 The Kirby-pencilled features in this issue where I don't see enough to identify the writer are the one-pagers. If they're not by Kirby, though, I'd be surprised. He drew the cover, too. Unindexed here: the inside front cover uses mostly found art; the text 2-pager is one whose writer I can't ID. Inkers on the Kirby pencils? I can't tell. The inker on "Rex Mortgage" tries to bring something of the comic strip's look to the faces; the inker on "Tweetie Piper" and "90-Pound Weakling" just about obliterates Kirby's pencils.

From Here to Insanity—the S&K issue 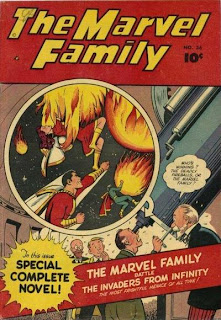 As with September 1948, I reconstructed the notebook page. Some hard-to-decipher words I figured out by working back from the stories in William Woolfolk's style that I found in the appropriate months, but I haven't seen the Monte Hales of this period. The next installment of Woolfolk's records will be January 1950.

Orbit, Quality, and Fawcett are the publishers. This is Kid Eternity's final issue of Hit; he'll be replaced by Mississippi steamboat captain Jeb Rivers (by other hands). The Golden Age of superheroes is losing steam...

UPDATE: Until Wanted 19 became available as a scan, the known story that seemed to fit this first one's description was "The Strange Case of Mortimer Dollard," the lead in issue 20. He may well have written that one too, of course—next month. ALSO: darkmark found the Monte Hale Weeper story, which fits the "meets" in the description and the June cover date alongside some of the other Fawcett stories here. Note that it was cut in half in number of pages between script and published story!

G.I. Combat began at Quality. Much later, after DC bought the title, the WWII stories of the Haunted Tank headlined; but in 1952-3 this anthology presented nothing but contemporary Korean War stories.

I can identify the three writers by style but can name only one of them, Joe Millard. "Q" worked on Ken Shannon, T-Man, Blackhawk, Exploits of Daniel Boone, Robin Hood Tales, and Web of Evil—and wrote a couple of stories for Doll Man—from 1951 or '52 to Quality's demise at the end of 1956. "GIC A" I've so far found scripting only on this title. The first story here uses "damn" and "dammit" but that experiment in precode adult-aimed writing ends before the issue and the title get any older. UPDATE: "Q" is Robert Bernstein.

Indexers have reflexively named Chuck Cuidera as Reed Crandall's inker on most of his stories at Quality, no matter the actual style (or the reports of other inkers like Les Zakarin or Sam Burlockoff on some of his strips). In the case of the first G.I. Combat story, however, Crandall's inker is indeed Cuidera. Note the faces of the lieutenant in the top tier panels as examples of Crandall's pencils and the sergeant's face in the bottom tier's middle panel as most obviously Cuidera's inks. 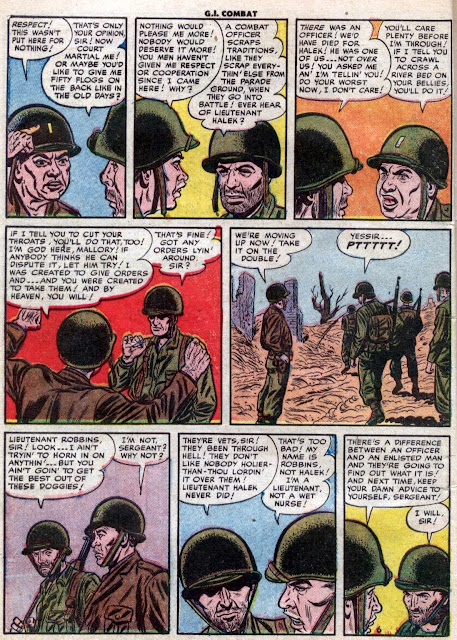 My impression is that Pete Morisi and Sam Citron ink themselves on this title, but the difference between John Daly stories' inks at DC and Quality suggests he didn't ink himself at both. After the obscuring inks over Charles Nicholas's pencils in #1, the inking of his stories here is pretty consistent, and so although I've never seen his inks credited later at Charlton or DC, I'll venture that he does ink himself from #2 on. 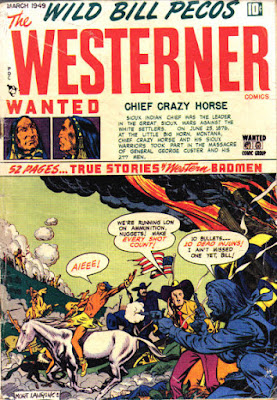 The records for November 1948 through December 1950 are unavailable; the available 100 months of William Woolfolk's records are about a hundred more than most Golden Age writers left. This month and next are ones I reconstructed, so there are a few words that escaped me. I had to backtrack on some; "Avernus" was just a squiggle until I read the Ibis story following last month's.

I can't find a Plastic Man story (at 15 pages it would have to be for Police, not Plastic Man) in Woolfolk's style in the appropriate timeframe, let alone one that fits what may be "crazy crimes."

"Blackhawk against Blackhawk" is in Woolfolk's style and published in a month you might expect. The villain's name in the published piece is Mung; his plot involves midget radios.

I could find the title of the Wild Bill Pecos story, as changed from Woolfolk's, but not its page count; his previous lead stories for The Westerner have been cut by a page or so. The Wanted story may have been published under another title.

I'll repeat the story editors gave of Bill Finger: he was forever cadging advances but had a real hard time producing scripts.

On the art side, Sheldon Moldoff did almost as many stories in this run, spelled only on the pencils of stories 131/2 and 133/1, by Dick Sprang, and on the cover of 135 by Dick Dillin. 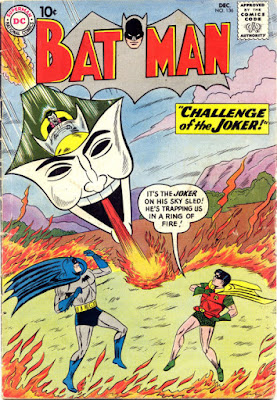 This run begins Alfred's stories of the second Batman and Robin team and introduces Bat-Girl. Batwoman, Bat-Hound, Bat-Mite, and the Joker appear. There are a few alien and transformation stories. Superman makes an appearance and Green Arrow is mentioned.