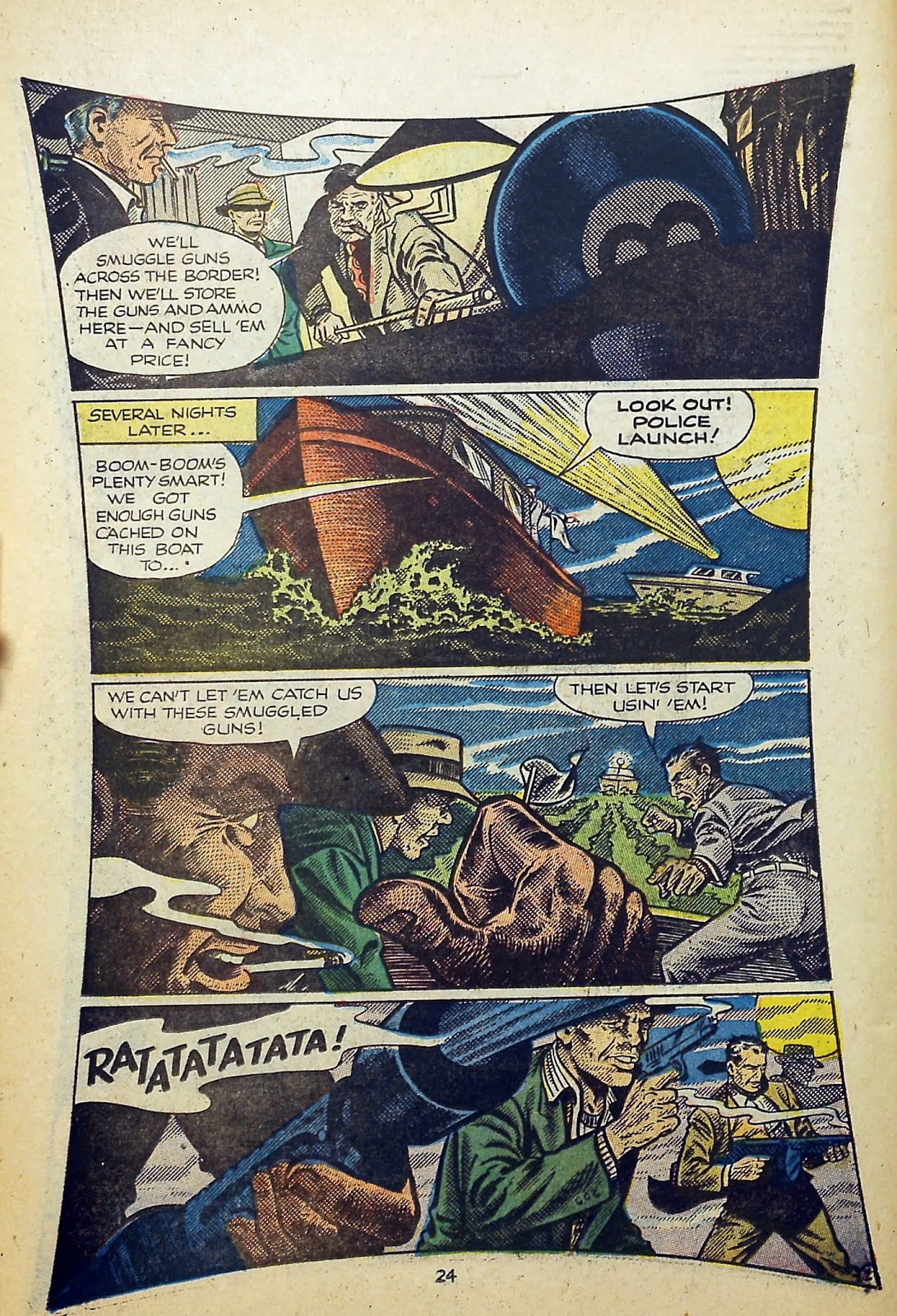 More updates to the publication data added to William Woolfolk's script-selling records—the data in bold is what he didn't enter as he recorded the writing and payment months before the stories were published. (With iffy Internet access at the moment, I'm posting here before I update the original posts themselves.)

The Tom Mix wasn't "The Tale of the Lonesome Cowboy" in TM 9, as I'd thought from the description—it's this one.

All the other stories were tracked down by darkmark, and most of them in the last couple of weeks. I'm still not sure how the "barker" I read in Woolfolk's handwriting fits the Golden Arrow elephant story that I haven't seen yet.

The storiues were published by Fawcett, Orbit, and Lev Gleason. This page from "The Gang War Murders" shows Lev Gleason's Deep Dimension 3D substitute ("No glasses needed—Full four colors"), which looks not so much like the 3D movies of the time as the later Cinerascope or Cinerama screen seen from the perspective of  lying on one's side across the theatre seats.

When DC summarily let go Arnold Drake with The Adventures of Jerry Lewis #107, the book continued without writers' credits. One of the new writers was the original writer.

Howie Post drew the first four issues of The Adventures of Dean Martin and Jerry Lewis. The difference in writing style as of #5 leads me to say that long-time writer Cal Howard didn't come aboard until artist Owen Fitzgerald did. Although Post's writing style evolves by the late Sixties, when he has credits like Anthro to compare with, I believe I see enough points in #1-4 to say he wrote as well as drew. 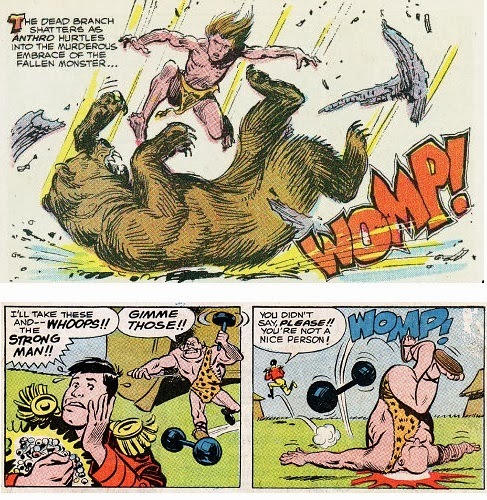 The writer (whom I can't put a name to) who wrote "Jerry-Flavored Ice Cream" wrote pretty much the rest of the run, to #124, the final issue. Others known to have written the feature in these years are Sergio Aragonés and Marv Wolfman (and it's a good bet they only plotted), and Alan Riefe, who otherwise has three DC mystery stories filling out his comics résumé.

Henry Boltinoff (not his brother Murray, the title's editor) wrote most of the 1- and 2-pagers. Possibly he wrote all, but the partial index is of the stories I find definitely in his style. UPDATE: I added the remaining two one-pagers, ones where I didn't think I could pin down Boltinoff's style before. Flipping through World's Finest 109, I found that "A Smashing Good Time" here reuses the plot of the Ollie page there. I'll concede that Boltinoff wrote the lifeguard story for Jerry as well; it's not not in Boltinoff's style.

Whether Bob Oksner inked himself at this point, or an uncredited Tex Blaisdell and others worked on particular issues, is a question I'll leave to the ages.


The Adventures of Jerry Lewis
penciled by Bob Oksner 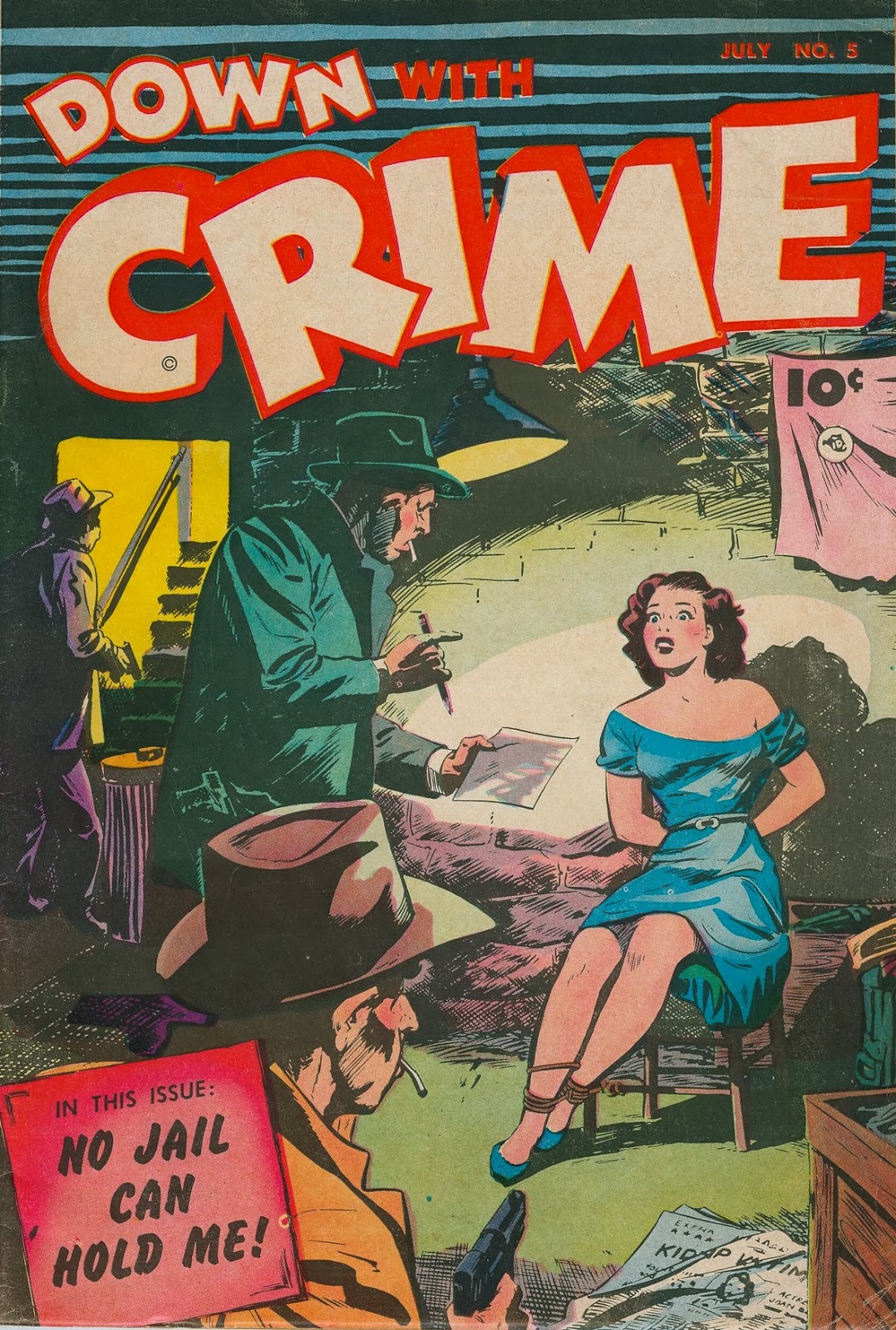 With a small number of scripts written this month, William Woolfolk still sells to the usual three publishers: Fawcett, Orbit, and Quality.

This month and next, some crime stories go to Fawcett as well as Orbit; the former pays $10 a page, the latter $12.50.

UPDATE: darkmark found the Sex Was My Weapon story--under a different title, even pre-code.

William Woolfolk branches out into another genre: standalone horror stories—not that his hero stories haven't contained the horror elements the times have called for. 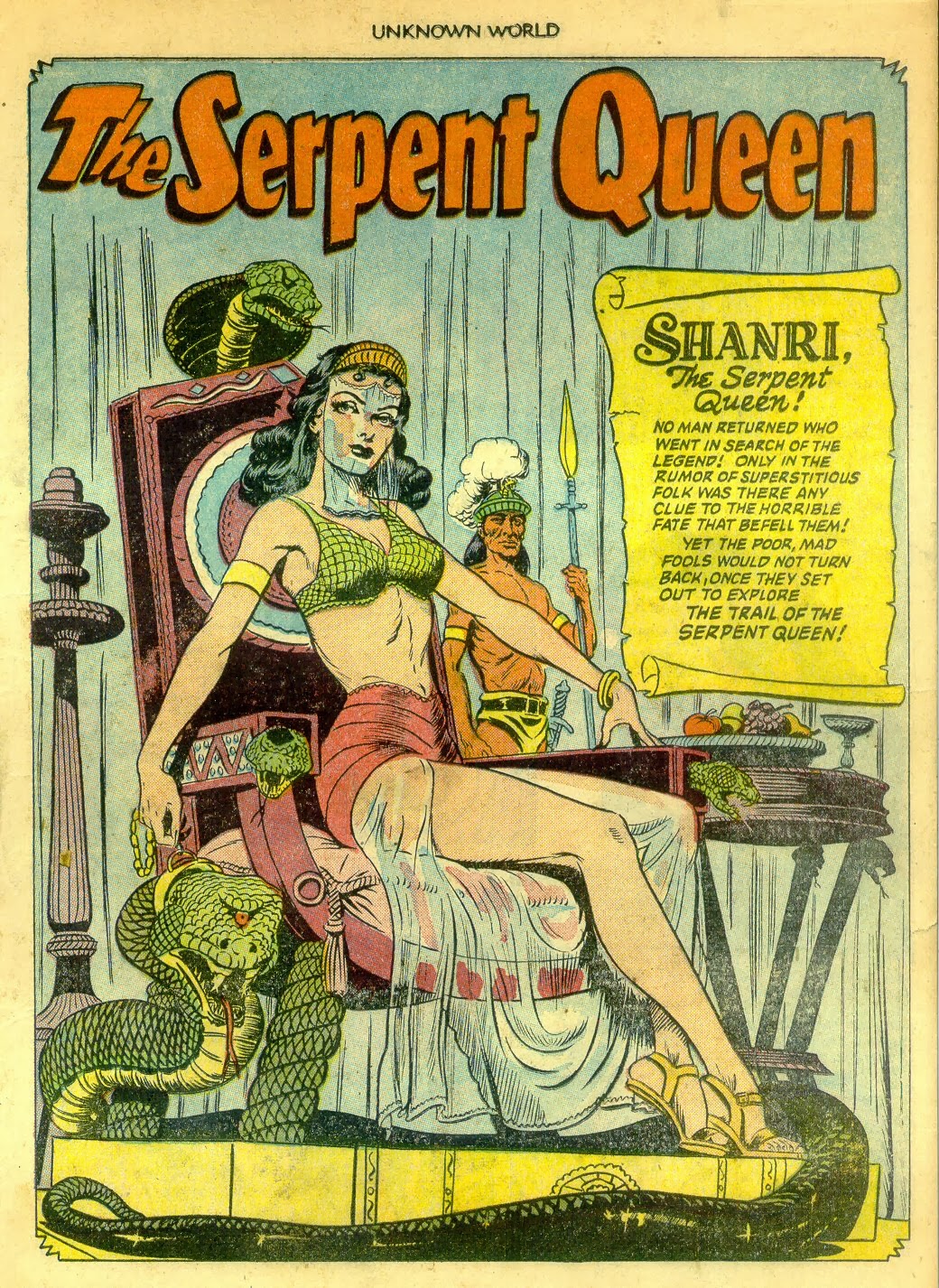 Although the first Blackhawk story this month is rejected by Quality, Woolfolk quickly turns it around, reworking it a couple of weeks later into an Ibis story for Fawcett.

Posted by Martin OHearn at 10:26 AM No comments:

Mo Marcus at DC: The Ding-a-Lings

Mo Marcus pencilled the first issue of The Monkees at Dell, and the Modkees series in Go-Go at Charlton, so he must have felt right at home with the foursome called The Ding-a-lings at DC. This musical group consisted of three guys and a girl, so of course it was a completely new concept (DC's earlier Maniaks in Showcase being two guys and a girl). 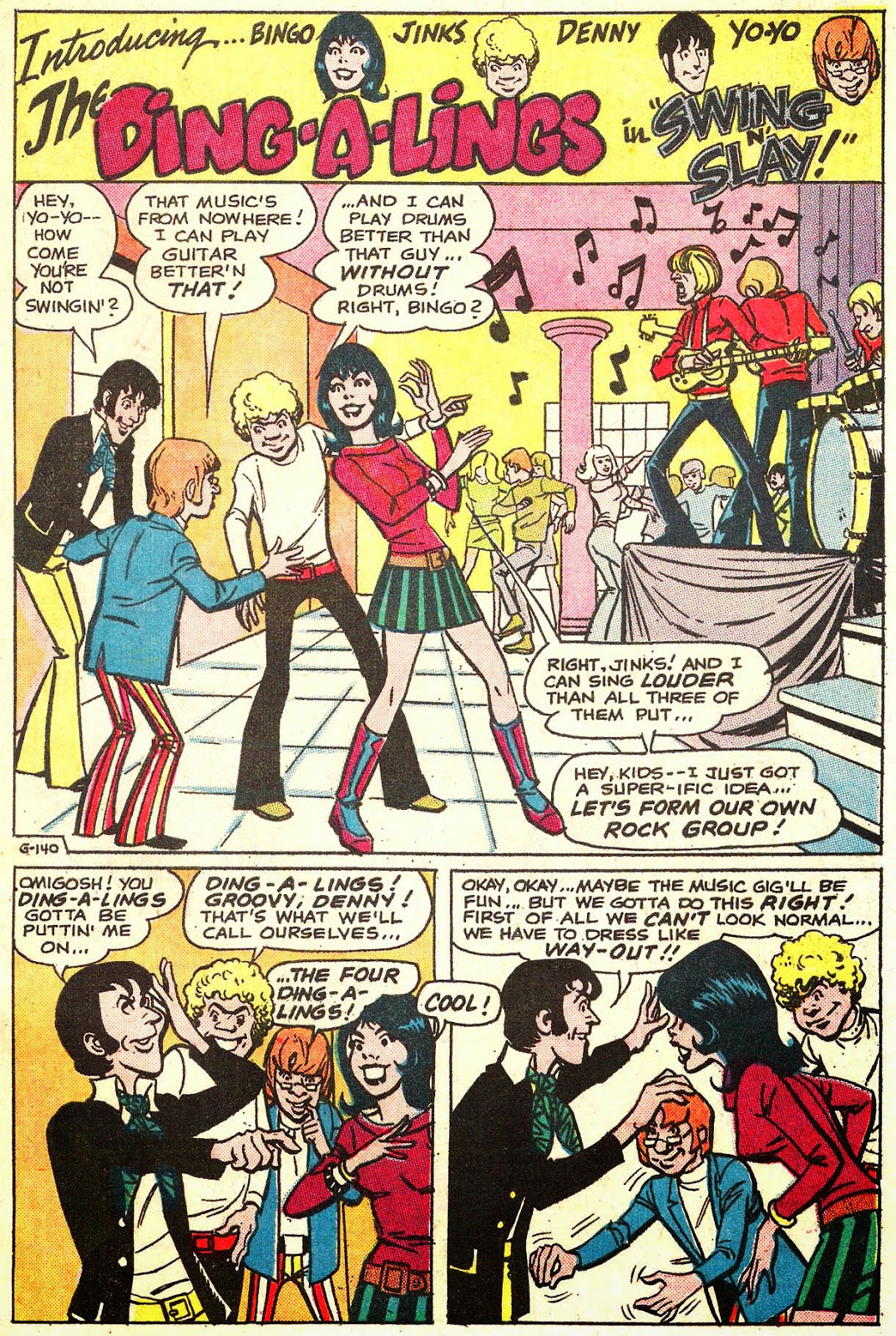 The connection that brought Marcus to Dell was freelancing artist Dick Giordano's asking him to ghost-pencil some full-art jobs assigned Giordano like Monkees 1 and Who's Minding the Mint?; at DC, on the Debbi titles, Giordano was the editor to begin with, so it was a more straightforward assignment.

Around this time Henry Boltinoff was writing teen humor stories longer than his ubiquitous DC cartoon pages, not only for the Ding-a-lings but for Debbi herself as well as Binky and Scooter.


in Date with Debbi


Mo Marcus also pencilled the "Outasite" bottom-third-of the-page cartoons, two in Debbi's Dates 6, and one in Date with Debbi 8 (Mar-Apr/70).
Posted by Martin OHearn at 11:18 AM 5 comments: