Bernstein's Last Run on Crime Does Not Pay (and Bonus Artists)

Finishing up Robert Bernstein's scripts for Crime Does Not Pay; the title ended with #147. (It went under the Comics Code with #143.) 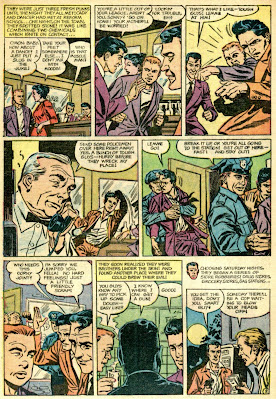 But first: while going over the last issues I made a few artist IDs. When I saw Dick Giordano's earliest stuff at Charlton it seemed to me there was a George Evans influence. Sure enough, a Giordano/Vince Alascia job at Lev Gleason has been miscredited in the Grand Comics Database to Evans--"The Fall of the Saturday Night Gang," shown above. Giordano/Alascia have "Unheeded Warning" in the next issue, CDNP 145, correctly attributed to them, and their story in 146, "The Big Mop-Up," is signed.

A few Crime Does Not Pay artists

Posted by Martin OHearn at 1:21 PM No comments:

One point makes it easy to tell E. Nelson Bridwell's scripting on DC's Angel and the Ape. Most of the other writers' ape-speak by Sam Simeon is gibberish, but Bridwell's, beginning with #4, is garbled English. In issue #6 the first story, "The Robbing Robot," is credited on the splash page to John Albano (thus I haven't listed it here). "The Ape of 1,000 Disguises" in the same issue is uncredited. Compare the ape-speak, given with translations. The ape-speak in Showcase #77 is garbled English too, but the sound effects confirm the scripting as Howard Post's. 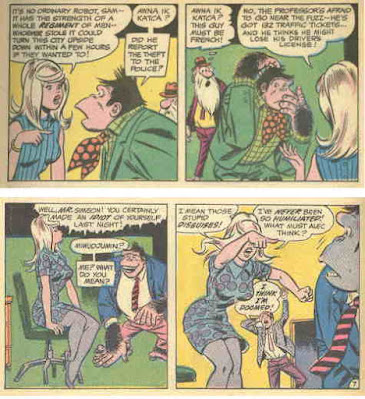 Angel and the Ape #1 confuses me more each time I look. I would have said Post, perhaps, but the ape-speak is now gibberish.

Henry Boltinoff's writing in #7 is easy to spot when he uses the caption "And..." such as he's used in his page-or-two cartoon features like "Jerry the Jitterbug," where brevity counts. He's the best bet for that issue's other one-pagers that I couldn't be positive enough about to enter here.

I can't tell who plotted a story. In the case of Angel and the Ape #2, which I've left off this list too since it's credited, Sergio Aragonés is in those credits as co-scripter with Bob Oksner, presumably plotter as he's listed first. Showcase #77? Supposedly Nelson Bridwell, supposedly Robert Kanigher, supposedly even Al Jaffee. I'd go with Bridwell from the contemporary On the Drawing Board #67 (June 1968) listing.

Writers:
Angel and the Ape in SHOWCASE


ANGEL AND THE APE

As of 1950 Carl Wessler's personal records are complete enough to name most of his scripts for Crime Does Not Pay at Lev Gleason, so stories are noted as his on the Grand Comics Database. The source is Robin Snyder's Wessler bibilography in The Comics, compiled from those records. Here I have another couple of his where the records didn't give the titles. "The Last Mile for Tony" contains both an "Ohoo" and an "Owooo" to show Wessler wrote it. I haven't found any Wessler stories on CDNP after mid-'51 that he didn't fully record.

The GCD wonders if "The Rabbit-Punch Murder Case" could be the 9-page 1951 script for Chip Gardner that Wessler records without a title. Here is an example of why I attribute it to Robert Bernstein: "Ieee!"

Posted by Martin OHearn at 10:39 AM No comments:

Andru & Esposito? (I've Burned Myself on IDing Them Earlier) 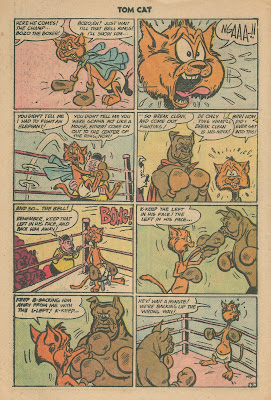 I let myself see Ross Andru and Mike Esposito on Dell's Monkees #1 but at least after "Lee" and Mark Evanier correctly suggested Mo Marcus, that led me to more Marcus IDs elsewhere. If anyone has a better idea on this funny animal art than Andru and Esposito, I'd be gratified to hear it.

"Outboxed the Boxer," the first story in Tom Cat #4, April/56--the first issue; yes, Charlton, why do you ask?--is drawn in a style not used in the other stories in that issue or the rest of the 5-issue run. The later issues are by Al Fago, who signs a cover and a story, and perhaps other artists in his style.

With the wildly different, comparatively "realistic" style of this first story, I'd think that it was another one of those examples of Charlton's buying up the inventory of a defunct company, but the writer, whoever it may be--"Ngaaa!" and Kurrash--continues on the feature throughout the run.

I'm guessing Andru and Esposito more by the inks than the pencils. Although this is a comical comic book, the figures aren't in the industry-wide "make it look like Mad but not anything actually like the Mad artists" style that Andru used on Get Lost.
Posted by Martin OHearn at 11:01 AM 4 comments:

Robert Bernstein Continues on Crime Does Not Pay

Here's Robert Bernstein's next couple of years writing for Crime Does Not Pay for Lev Gleason. I hadn't convinced myself of his writing the Who Dunnit? story in #70 when I did the first list.

CDNP closes out 1950 with #94, but I don't see Bernstein work in those last issues of the year.

As I was looking for Bernstein stories I found a couple by Carl Wessler that didn't get to the CGD from his records. In this tier from "Jack Rosca," note the exclamation that I haven't seen Robert Bernstein ever use.

The early 50s company Star is best known for its covers by co-owner L. B. Cole. On the insides it made do with a lot of reprint material from various publishers, most notably Novelty, from whom it continued some titles and characters. Teen-age model Toni Gay, for instance, is a continuation of Novelty's Toni Gayle girl detective strip.

Star's romance and teen-age books did contain some original material, and every so often in the romance titles Ken Fitch got a scripting credit. So I knew to look for him at Star, and I found him on at least the first two Toni Gay stories. This tier from "The Hoaxed Hoax" shows not only his typical "Aiy-y-y-y-y-y" but the "Eeeeeee" found in some of his romance stories. The artist is Norman Nodel.

On many of the stories in the other strips in School-Day Romances/Popular Teen-Agers--Ginger Snapp/Ginger Bunn/Honey Bunn, Midge Martin, and Eve Adams--I find one writer whom I can't identify who uses the expression "Sufferin' Susie" often.

Posted by Martin OHearn at 12:54 PM No comments: 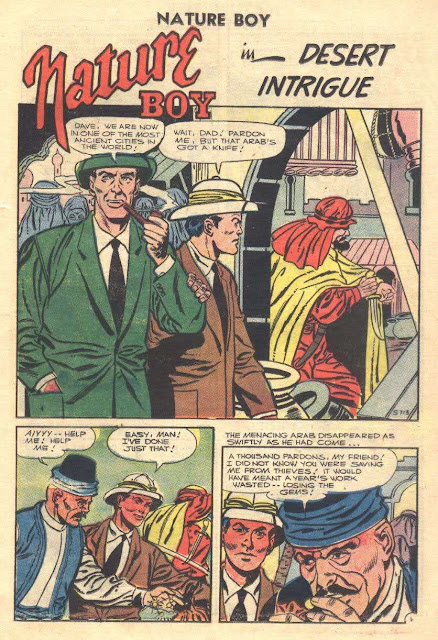 After all the times that Sal Trapani was given the attribution for his ghosts' pencils, it's only fair to give him credit for some stories he did ink without being recognized. I'm not sure who did the pencils on "Starvation Valley" in Nature Boy #4. Could Bill Fraccio have done any?

Jerry Siegel has been correctly credited with the John Buscema drawn stories in #3 (the first issue) and #5. The guess at Joe Gill for #4 and one story in #5 happens to have hit the mark, but another writer known to have been at Charlton in the 1950s wasn't considered. That's Ken Fitch, whose "Aiyyy" is seen in his later Dell work such as Space Man.