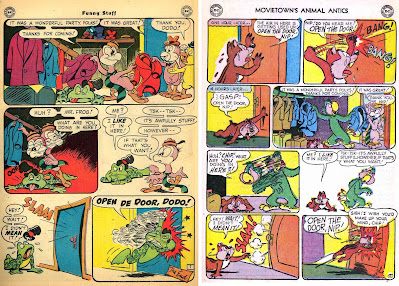 In my skimming the 1950s DC funny animal titles, a couple of stories with reused scripts jumped out at me, because the originals were so distinctive--they were part of a comic book with a running gag throughout the different strips in the issue.

All the strips in Funny Stuff 25 (Sept/47) are untitled stories. At the end of the first Dodo and the Frog story, the Frog is stuck in the Dodo's closet yelling "Open de door, Dodo!"

("Open the Door, Richard" was a vaudeville routine whose song verion was released as a record in 1946 and got on the Billboard charts in 1947.)

Then in the 3 Mouseketeers story a house is seen in one panel's background with "Open da door, Dodo" coming from it; likewise in the Henry the Laffing Hyena story a similar balloon is making its way under a door. (These could be editorial emendations.) Blackie Bear in his story interacts with the Frog in the closet; so does J. Rufus Lion in his. There's a Dodo and the Frog half-pager with the Frog still in there, and finally the second D&F story gives the situation a punchline.

In Animal Antics 49 (Mar-Apr/54) the Nip and Chip story refries the first of FS 25's D&F stories--never getting to the actual punchline of the entire Frog-in-the-closet saga. Interestingly enough, there's a cameo at Nip's home: the Dodo. The Raccoon Kids story "Boom!" refries the earlier Blackie Bear story, but the house in this version remains the Dodo's--and he's the one in the closet this time. The Professor from the Nutsy Squirrel strip plays the same role in both the Blackie and Raccoon Kids versions.

I don't know who wrote the Funny Stuff stories, and the refries are pretty much that person's work transcribed, but from the tales about editor Larry Nadle, he may well have vouchered DC checks for himself for the "new" scripts.