The Phantom Stranger was revived in the late Sixties with, at first, new frame stories around Fifties reprints of that character and of Dr. Thirteen, the Ghost-Breaker. 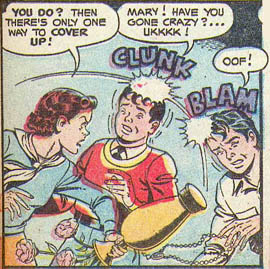 The scripts of those frame stories in the first three issues (Showcase 80 and PS 1-2) have for some time been attributed to Mike Friedrich, but I remember reading a fanzine piece some twenty or thirty years ago that gave the credit for #2's script to Otto Binder while confirming Friedrich as writer of Showcase 80 and the first PS issue.

"The Man Who Died Three Times" (PS 2, Aug/69) is indeed a Binder script—Binder is known to have written for editor Joe Orlando at the time, with a handful of stories in House of Mystery. This Phantom Stranger script is in the style of the main writer of Captain Marvel, as seen in the "Ukkkk" and "Ulps" used also in Marvel Family 88 (Oct/53) and 89 (Jan/54)—among many, many scripts over the course of Binder's career.

I wish I could give the source of that fanzine article or letter, because if I recall it correctly, the writer had no agenda in denying Friedrich the credit—that writer was Mike Friedrich.

With Gold Key's comic of the spin-off UNCLE series, and the back-ups, there are no surprises among the writers.

I can see Bill Lignante's art on Girl from UNCLE 3-5, but I don't see the same art as on the Phantom. Since Sparky Moore says he ghost-pencilled for Lignante, on at least some of the Phantom and on Secret Agent 1, those don't make a good example of full art by Lignante. On these panels from Girl 3 I wonder if I see Mike Peppe inks—for want of a better guess—on at least some faces. 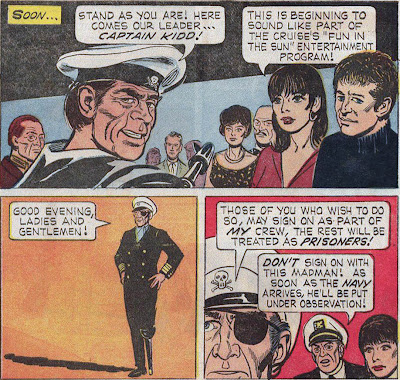 
Leopold Swift—Courier in Girl from UNCLE Written by Newman

The Man from UNCLE Affair

Above is a panel from Gold Key's The Man from UNCLE 3, pencilled by George Tuska.

Following up on Mark Evanier's comment about likenesses: although in some cases the license holders insisted on extra work for that fidelity, in other cases the contracts forbade comic books from using likenesses. After the comic book's first two issues, the powers-that-were recognized the popularity of David McCallum's character Illya Kuryakin, and so he and Leo G. Carroll's Alexander Waverly became recognizable in the comics. In those first issues, only Napoleon Solo's face was reinked or redrawn, for the sake of Robert Vaughn's likeness—as in the Tuska panels below, from #2.

On the entire series, it looks to me as if Mike Peppe inked more than the Sekowsky issues attributed to him previously; I'm not sure if #1-2, apart from the Solo faces, were inked by someone other than pencillers Heck and Tuska respectively. (Update: read Mark's comment on this post.)

If Marshall McClintock wrote the Man from UNCLE for Gold Key as the Who's Who says, he didn't do final scripts; they're all by Paul S. Newman or Dick Wood. Wood's are filled with his trademark exclamations such as "Great suffering Hannah." Wood errs in his first script, as many have, by referring to UNCLE as the United Network Command for Law Enforcement—it's the United Network Command for Law and Enforcement.

Werner Roth drew the Lorna the Jungle Girl stories in her title at Atlas from #1 (July/53) through the first two stories in #12 (Mar/55), without a signature. Her artist in #13 (May) was Jay Scott Pike, who signed his stories. The unsigned third story in #12, "Trial by Fire," has been attributed to Roth in the Grand Comics Database and to Pike in the Atlas Tales website. 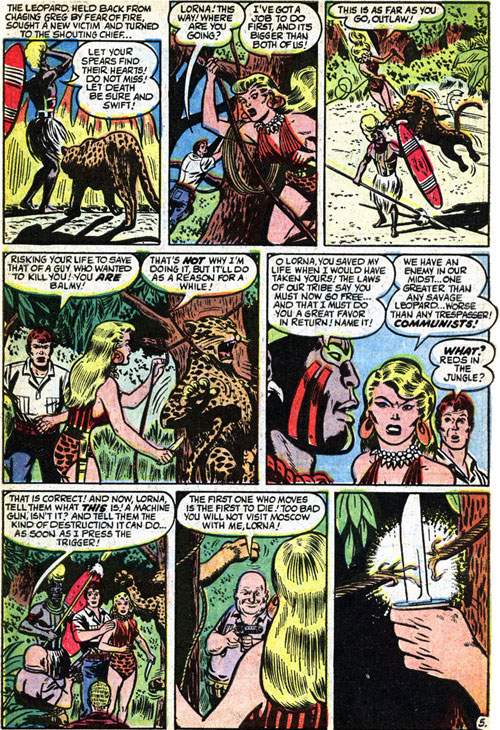 The artist has been correctly attributed the Greg Knight solo story in #13. He's Bob Brown, who would pencil another Marvel jungle girl when Shanna the She-Devil guest-starred in Daredevil in 1974.

One writer did most of the Lorna stories I've seen so far. Don Rico is known to have written Jann of the Jungle for Atlas at some point, but whether he wrote the bulk of the company's jungle stories is a question I haven't answered to my own satisfaction yet.
Posted by Martin OHearn at 11:49 AM 2 comments:

Issues 6 and 7 of Dell's TV tie-in F-Troop look at first as if they use the statted art process seen in I Dream of Jeannie. On second look, although the facial poses of each male lead are repeated over and over (in these illustrations from #6 it's Forrest Tucker as Sergeant O'Rourke), each is redrawn--traced?--anew in the inking. That the figures take the same pose and position in each panel suggests that penciller Bill Fraccio was told to facilitate this process.

All these panels appeared farther apart throughout the comic, although these two were on the same page:

This art is in the same style as the Dell monster superheroes and the Warren stories drawn by "Tony Williamsune," so I'm sure Bill Fraccio pencilled F-Troop. In fact, I don't know if I've seen Tony Tallarico's own pencils at all in Sixties comic books. 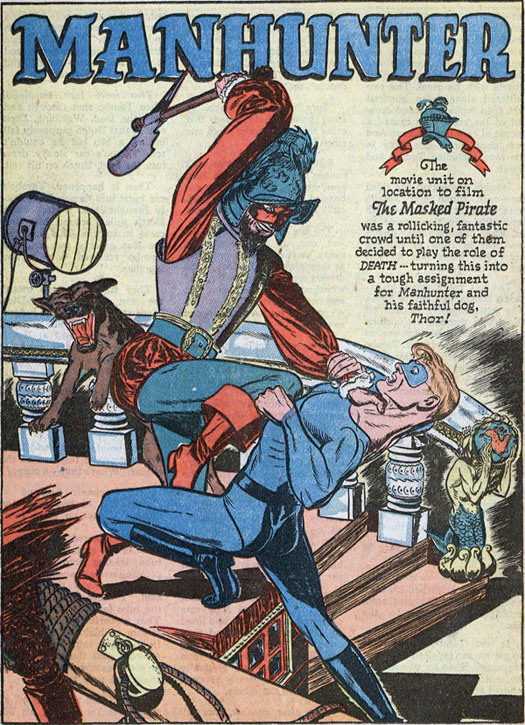 Shoehorned into the bloc of Manhunter stories in Quality's Police Comics pencilled by Pete Riss around 1945-46 is one by another artist (and by a writer I can't ID). The penciller of "The Black Pirate," in #55 (June/46), had done a few stories for Quality a couple of years earlier. His work is pretty distinctive at other companies, but Quality's inkers imposed a certain house style. On the close shots of Patrolman Dan Richards, like the one in the circular panel here, the inker is trying very hard to make this artist's work match that of Riss. 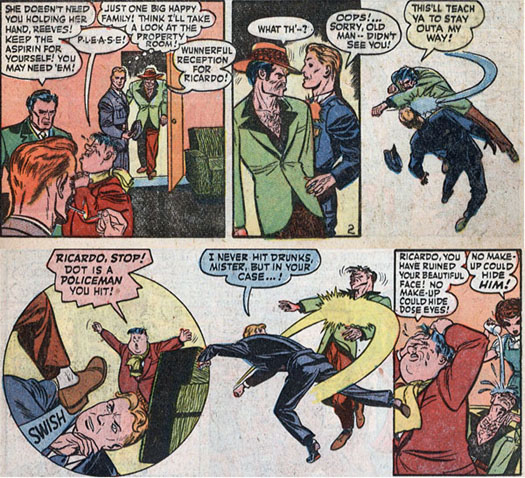 The figures of the character Ricardo are the giveaway that this story was pencilled by 20-year-old Joe Kubert.
Posted by Martin OHearn at 1:07 PM 2 comments:

This list's Manhunter stories in Quality's Police Comics are pencilled by the Superman artist I identified as Pete Riss in my previous post. The same "actor" appears in both the Action 92 Superman story ("Haircut—and a Close Shave," May/46) and the Police 49 Manhunter one: the bullet-headed and emaciated type who plays the barber in one and Allard in the other. 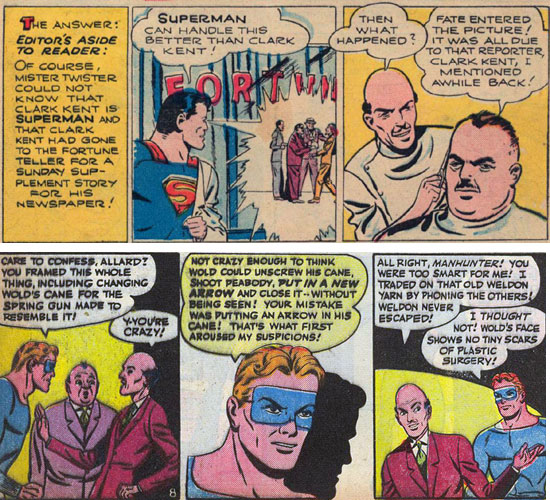 None of these Manhunter stories' pencils are by Al Bryant, to whom they've been attributed. Other artists worked on the feature before #37 and after #59; Riss may have done some stories in years other than this mid-Forties run. Note that Riss did not draw the story in Police 55.
"MH" is a writer whose style I can follow from story to story but whom I can't name. I see more than one inker on this run of stories; penciller Pete Riss may well be one of them. Perhaps John Forte is another.

I'm using my own standards as to which words on a splash page constitute a title, and I've made up the titles in brackets for this list.

Back in the Nineties, Rich Morrissey and I worked at identifying the Golden Age Superman artists for a guide he intended distributing though the Amateur Press Associations he belonged to.

One artist we thought we could name immediately was the penciller of "The Quicksilver Kid" in Superman 26 (Jan-Feb/44). He sneaked his name in on a wanted poster as "Killer Riss"—and as we could see from the Who's Who, Pete Riss had indeed worked on Superman in the Forties.

When Rich circulated his Superman Artists Guide, the feedback told us that we had mixed up Pete Riss with Sam Citron. Riss was a friend of Citron's, and that poster was an in-joke, not a signature sneak, we heard.

The credited work that Sam Citron did later for Gilberton, ACG, and Warren showed a hugely improved art style, but then, anyone can improve in ten or twenty years. In his revision of the Guide, Rich admitted our mistake, and we identified that artist as Sam Citron on similar Superman stories.

From the evidence I've seen since, we were right the first time. Mid-1940s work with an actual Riss credit line is closest to the style of this Superman artist than to any other.

Riss is credited with the Millie art on the intro page of Timely's Millie the Model 8 (Oct/47)—the artists of the Willie and Rusty back-ups go uncredited, as do the issue's writer or writers.

The Superman art and Millie art share a stiffness in the figures. I'm showing panels from the Superman story "Haircut—and a Close Shave" in Action 96 (May/46), attributed nowadays to Sam Citron (not credited to anyone other than Jerry Siegel and Joe Shuster in the creators' byline, of course). The artist of both stories notably treats arms as sticks and elbows mostly as hinges that work only on the plane of the page. The Millie panels are from #8's story "The Model of the Golden West"; compare the arm of the cowboy in the lower left Millie corner with that of the mustached man in the panel from "Haircut."

On Millie 7 (Aug/47) Pete Riss shares the credit for Millie art with Ken Bald; I'd say Riss pencilled the first and third stories in #7 and Bald pencilled the second and fourth. I believe one uncredited inker worked on every Millie story in both issues. (On other Timely comics' intro pages, the two artists listed, such as Mike Sekowsky and Joe Giella, were indeed penciller and inker. Was Stan Lee being inconsistent? Yes.) Bald, like the later Citron, has a better grasp of anatomy than Riss; and he gives some of his walk-on characters faces in a style unlike those in Riss's limited repertoire.

Comparing elbows again, this time from #7's "Millie's Music Maker," note the similarity of the Superman emcee's and the Millie band-leader's (in the center of the panel):

The strong Millie inker certainly submerges the penciller, but the only similarities I can find at all to any Superman artist are to the one presently IDed as "Sam Citron."

I feel Pete Riss did in fact sneak his own name on that wanted poster, and drew quite a few Superman stories (and Lois Lane back-ups) in the style of "Haircut." Whether the few stories now attributed to Riss are actually by Citron is a good question!
Posted by Martin OHearn at 11:49 AM No comments:

When I looked at a run of Police Comics in 1945-46, I found #51 the only place where this Manhunter story could fit; the stories just after are by Woolfolk (on his records) and, going by the style, the ones just before are by Joe Millard. #51's is in Woolfolk's style.

SangorShop tracked down "My Hero" soon after I had posted it with publication data unknown. Bob Hughes found "Millionaire Island" when I couldn't.

I've also updated the post just before this one, Woolfolk Records 1954/05 and /06, with info from SangorShop.


I hope to see the Woolfolk records that I didn't transcribe appear somewhere in the future; I'd certainly be interested in them. Again, my thanks to Marc Svensson and to Donna Woolfolk for access to the ones I did.

Now I'll be dropping my posting frequency from three times a week; I had all the Woolfolk posts written out before I started blogging, so I'd already spent the time on them. I want to put The Terrible Troll and future novels before potential readers in more places on the Web; blogging has to give up some time for that.

Some of the marketing advice about ebooks is to keep experimenting with covers, blurbs, and pricing. I'm trying a new cover on Troll; I far prefer a pulp-style painting, but does that attract readers nowadays? I'll mention for those who don't own an actual Kindle that the Kindle for PC and Kindle for Mac applications are free downloads from Amazon.
Posted by Martin OHearn at 11:47 AM No comments: