Husband-and-wife team Cecil Beard and Alpine Harper were the writers on the Fox and Crow and related strips like The Hounds and the Hare, Flippity and Flop, and Tito and His Burrito at DC. The Fox and Crow strip lasted into 1968.

Editor Murray Boltinoff had Cecil Beard give a quick bio in F&C 97, in which he identified Alpine Harper as his collaborator and noted that, having been writing comics for 20 years in '66, "by now, I think we've written for almost every comic character in the business." 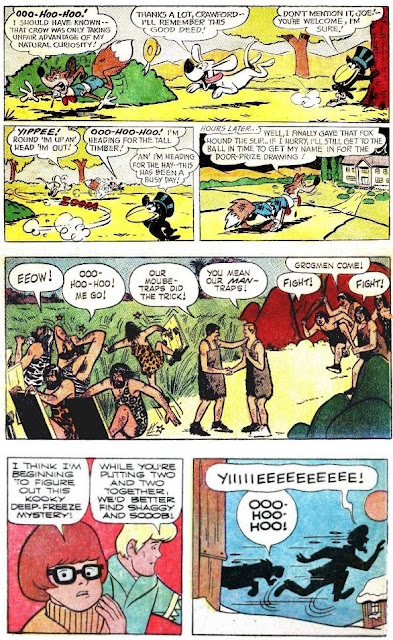 I found a few of their later scripts at Gold Key by their distinctive "Ooo-hoo-hoo." From one story in it I could work out that they did the entire single issue of the time-travel sitcom tie-in It's About Time; I believe they did more stories of Scooby Doo than I've listed here, but it will take more study to be sure of the ones without "Ooo-hoo-hoo." The tiers are from the untitled first story in Fox and the Crow 90 (Feb-March/65); "A Better Mousetrap"; and "That's Snow Ghost."

Cecil Beard & Alpine Harper Scripts on
It's About Time