After the nom de plume "Norm DiPluhm" at Charlton was attributed by fans to Steve Skeates, he spent years explaining that it wasn't him.

Rip Jagger's recent post on his blog about DiPluhm's Phantom stories reminded me of who the writer really is—the splash page to "Skyjack" that Rip uses as his illustration has the Ghost Who Walks saying "Great Scot" with one "t" rather than the more common "Great Scott." That and other markers unlike Skeates' identify the writer as D. J. Arneson. (He also wrote as DiPluhm for Go-Go and Abbott and Costello, two titles Skeates worked on, which may help explain those fans' thought processes). This example is from "The Giant Ape of Thawth." 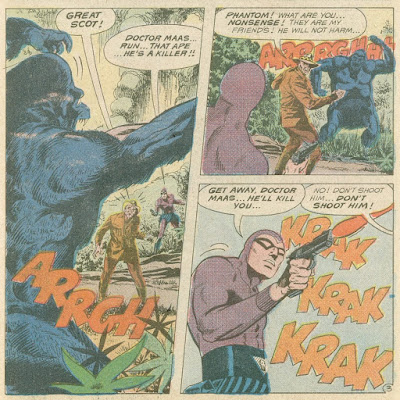 That's the entirety of Arneson's Phantom stories. On Ghostly Tales here are the stories that jumped out at me in flipping through the entire run for my own indexing; there may be a few more.