At one point I thought I saw some Jack Kirby pencils at ACG when he never actually had anything published there. Seeing Johnny Craig pencils there in a 1949 story might make more sense, since he certainly worked for them a decade and a half later. The story in question (see the first tier excerpted) is "The Mummy's Cloth" in Adventures into the Unknown 7 (Oct-Nov/49), attributed in the Grand Comics Database to Craig with inks by Harry Lazarus. 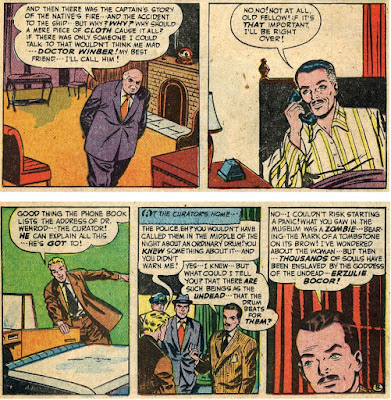 Actually the penciller (if not full artist) is Pete Riss.

Oh, and one more (from which I take my example's second tier): the next comics story in AITU 7, "Drums of the Undead."
Posted by Martin OHearn at 9:42 AM No comments: 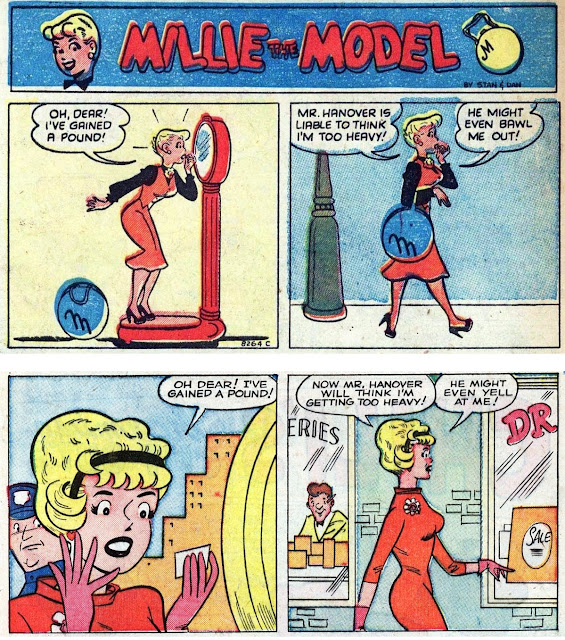 The first tier above is the beginning of a one-page gag (in Millie the Model 32, Jan/52); the second tier comes from the top of a two-page piece ("What Makes Millie Mad?" in A Date with Millie 6, Aug/60). Stan Lee creates a splash page for the latter by—what do you think?—recycling again; in this case a cover gag from just the previous year (Millie 92, Sept/59). He adds a bit to connect them that may or may not be new.

Stories in A Date with Millie
reworking earlier scripts


in Life with Millie

Posted by Martin OHearn at 10:29 AM No comments:

A Quality Writer Comes to DC 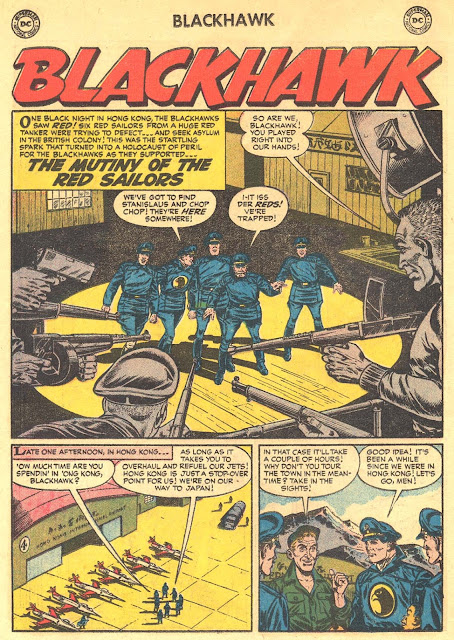 When DC buys Blackhawk from Quality they take over publication without a pause; Quality's final issue, 107, is cover-dated December, 1956. Dick Dillin and Chuck Cuidera become DC artists when they come over with the book. Also coming along is Robert Bernstein, the sole writer on the final batch of Quality issues.

The writers already at DC assigned to the feature at this point include Jack Miller and Dave Wood; possibly Dick Wood too, who had worked on it into 1955 at Quality. I'm still working out the authorship of the individual non-Bernstein stories.

It would seem that the only completed story art done at Quality that DC received in the deal is "The Mutiny of the Red Sailors" in 108; the letterer is whoever worked on the title as of 107. "The Threat from the Abyss" may have been passed along to DC as a script; it too is an anti-Communist story of the sort that DC didn't much do on their own (and it's the final story in which the Blackhawk song appears at the end). My opinion is that Bernstein wrote most of the stories here directly for DC; he's moved to Aquaman, Green Arrow, and Congo Bill by the end of 1957.

One artist on a couple of romance stories at DC I felt I should be able to put a name to. It wasn't until I checked the Who's Who that the coin dropped and I got the name: Carl Pfeufer. I had seen some of his Sixties work on a few backups in the Harvey Thrillers—and on Super Green Beret at Lightning Comics. The tier below the "Two Hearts on a Tree" page is from Super Green Beret 2 (June/67). 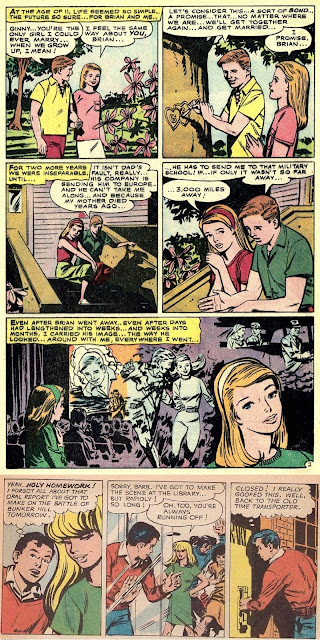 The Who's Who has Pfeufer down for Secret Hearts but not for Falling in Love. It also credits him with work in Girl's Love Stories (likewise in 1967), but I haven't run across any of his stories there yet.

Below are listed the stories in Charlton's Space Adventures that I attribute to Carl Memling from the writing style. While looking over the run, I came across some other items of interest.

"The Uncharted Planet" in #6 (May/53) is lifted from A. E. Van Vogt's story "Enchanted Village" in the magazine Other Worlds (July/50). It had already been lifted in Atlas/Marvel's Journey into Unknown Worlds 9 (Feb/52) as "The Four Walls" and would be legitimately adapted in Marvel's Unknown Worlds of Science Fiction 4 (July/75). The Charlton version is drawn by Art Cappello while the Marvel adaptation's art is by Dick Giordano. (The latter's script is by Don and Maggie Thompson.) 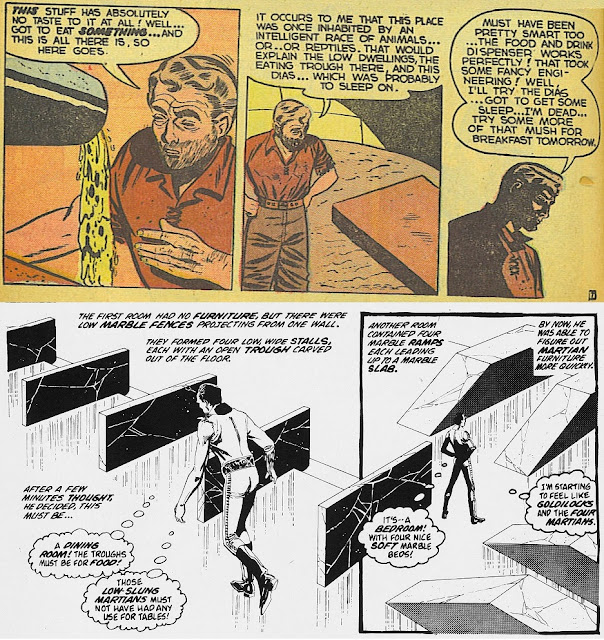 Without the ECs before me but going by memory, I'm going to venture that "Transformation" (art by a younger Dick Giordano) in SA 7 (July/53) lifts one of their stories. From a list of their titles, I'd figure the original for "There'll Be Some Changes Made!" in Weird Science 14 (July-Aug/52). I don't want to ruin the endings; maybe someone with access to both can say yea or nay.

And I can ID one other story's writer in this period. "Jealousy on Kano" in #16 (May/55) is by Ken Fitch ("Aaiiiyyy!"). He wrote some stories for Charlton, and had some published by them out of inventory bought from other publishers; with the art on this one by Bernie Krigstein, I'm going to guess it was done for someone else.

Posted by Martin OHearn at 11:57 AM No comments: