Young Men's C.A. (You've Got Nothing to Lose)

Captain America isn't mentioned on the Who's Who list of Don Rico's work for Atlas, but the features that he did script, like Rawhide Kid and the various jungle ones, contain stories that match the style on the 1950s Cap revival. I've gone back on forth on this for some time, but I'll come down on the side of this being Rico. 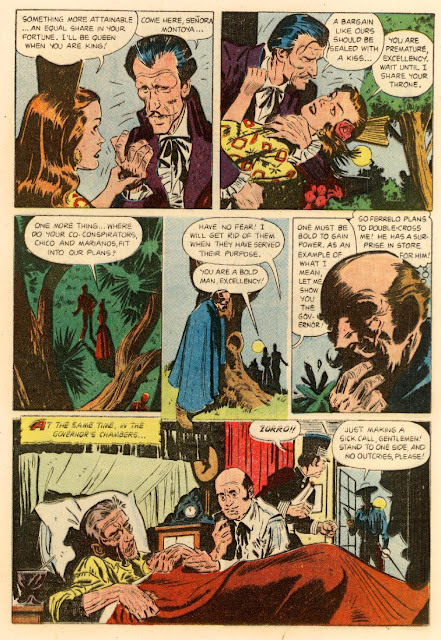 At Western Publishing /Dell, Joe Kubert pencilled three features from novelists: Zorro, Max Brand's Silvertip, and Ernest Haycox's Western Marshal; and one TV tie-in: Steve Donovan, Western Marshal. The page above is from "The Sword of Zorro" in 1953

In the beginnings of Kubert's work on these, his inker was tending mostly to the close-up faces and nearer figures. Kubert's inks show on the backgrounds and distant figures. Even some of the display lettering is Kubert's. The emanata, to use Mort Walker's expression for the lines indicating emotion, are certainly a Kubert tool. The point arrives where Everett Raymond Kinstler inks mostly everything, but you can look hard enough and still see Kubert, ghostly, underneath; see the jail and especially its sign from "Silvertip's Trap" in 1959.

The only inside-front-cover page where I can see Kubert pencils is "Zorro's Pistol" in FC 538.

I haven't seen FC 572, "Silvertip's Search," but like the rest of these it's attributed to Kinstler, so it 's probably the 15th Kubert-and-Kinstler issue. The art on the other Silvertip not listed here, FC 835, "The False Riders," is by other hands.

As I was getting together these books out of order, it was after I'd started this list that I found this 2013 comment from Josemas on Comics Plus for FC 491: "Looks like Kinstler had been studying Kubert before doing this job."


Pencils by Kubert
Inks by Kinstler