When DC's anthology Western Comics gains a new cover feature with Pow-Wow Smith in #43 (Jan-Feb/1954), Julius Schwartz has become editor. As on his other books he records payments to writers and artists, and he inherits, to some extent, Jack Schiff's payment records for the title; thus there are more extensive Western writer credits in the Grand Comics Database than you might have expected. The surviving records don't, unfortunately, extend all the way back to #1.

Masked and double-identitied Nighthawk took over the slot of the similar Vigilante with #5 (and missed #6). Western 5 came out in the same month as DC's Dale Evans Comics, where writer Joe Millard's best-known DC work, the Sierra Smith back-up strip (not to mention his Dale Evans stories) begins. Millard's run on Nighthawk coincides, as it happens, with Charles Paris's run of pencils and inks on the feature. 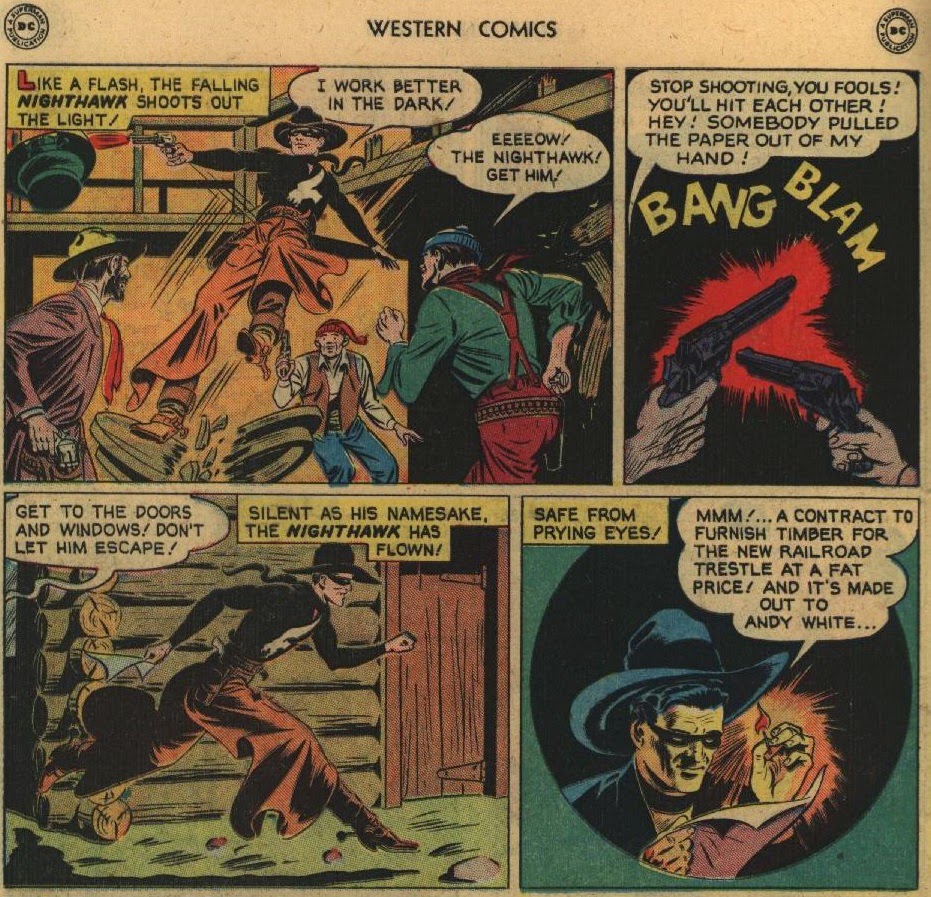 The incidence of  "Eeeeow" led me to Millard as the author on these. For another thing, he begins a few balloons per story with "Gulp!", a habit that Gardner Fox and Don Cameron, soon Western's go-to authors, don't have. Millard's exclamatory captions are reminiscent of Otto Binder's.

These are all of Millard's Nighthawk stories. I can see that #13 and 14's are by a single author, although one I can't put a name to; an Alan Brennan is known from the Who's Who to have written Nighthawk in 1950, so take that as you will. In another few issues Cameron and Fox write their first Nighthawks.

Posted by Martin OHearn at 8:36 AM No comments: 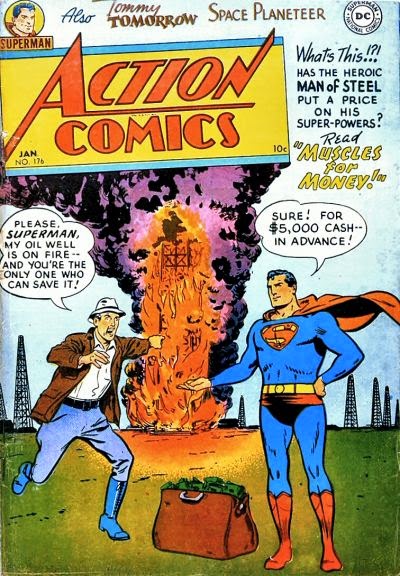 Posted by Martin OHearn at 10:12 AM No comments:

Twistin' Time Is Here (But Who Drew It?)

Dell's one-shot The Twist (July-Sept/62), riding the coattails of the dance craze, was written by Paul C. Ignizio. That attribution comes from Martin Grams Jr.'s book on "Car 54, Where Are You"; Ignizio wrote to the producers with a sample of his writing, the Dell tie-in to that show, and mentioned The Twist as another Dell he'd written. Mark Evanier's mention of that on his blog brought Ignizio to indexers' attention.

The artist of The Twist has gone misidentified, but he sneaked in versions of his name twice.

The interior art has gone misidentified because the cover artist signed his work. "Williams" is, I'd agree with the Grand Comics Database, Bill Williams. But he no more drew the insides here than Gil Kane drew every Marvel in the early Seventies.

The artist with this style in 1962 used it on other Dells like The Andy Griffith Show and Margie. He's Henry Scarpelli. (The GCD currently attributes Margie's art correctly but gives credit for Andy Griffith's to Bill Fraccio.)

A few years later Scarpelli would change his approach somewhat, using photo-reference stats on books such as McHale's Navy, something that he didn't use on those 1962 ones. After that, the deluge, as he refined the cartoonier style of his syndicated panel TV Tee-Hees. He set the Archie-like template for DC's teen books with covers and, generally with others penciling the interiors, inks. (I was surprised to find that he used his more "realistic" style at DC first, on Stanley and His Monster.) 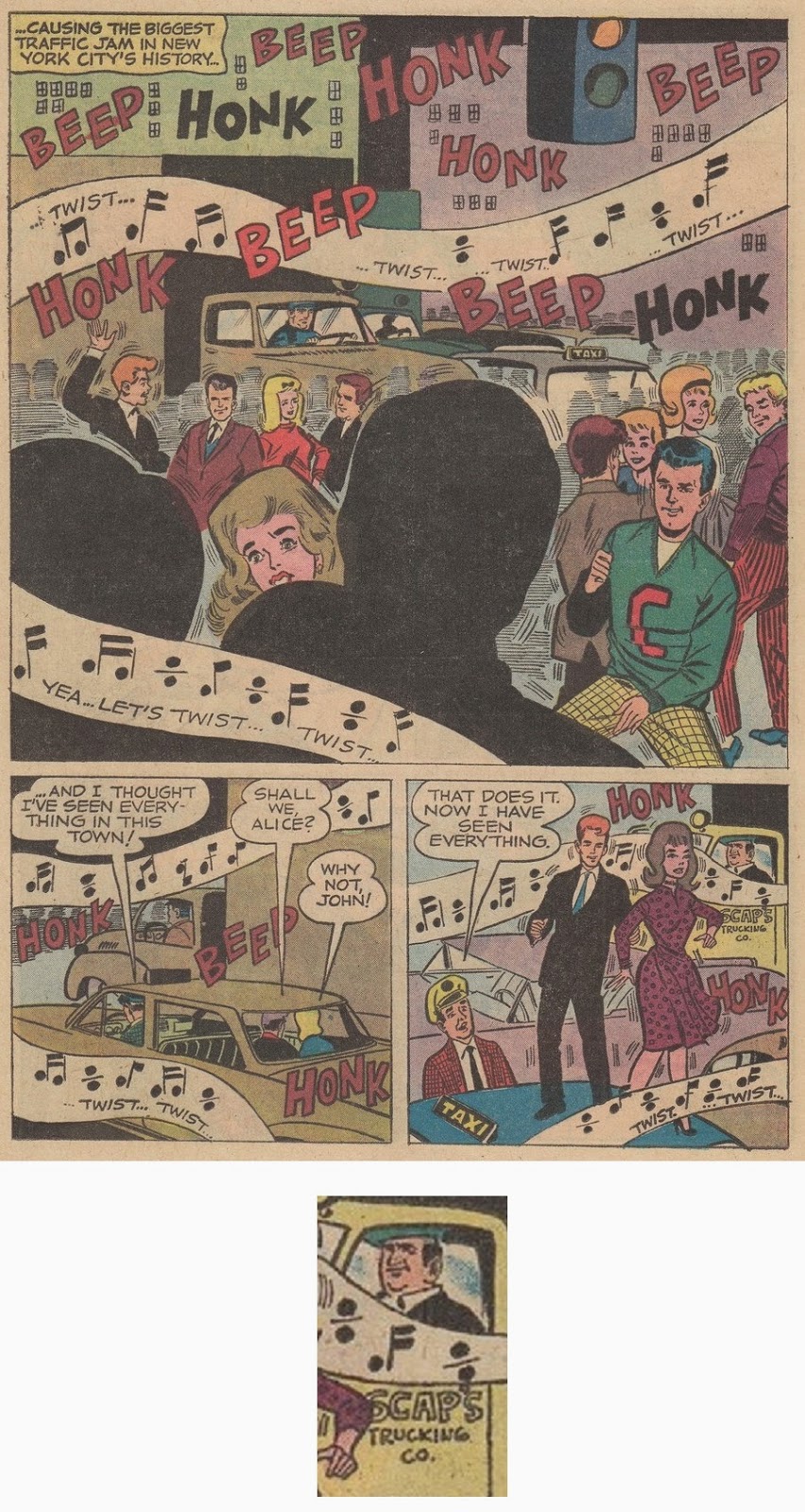 On page 11 of The Twist, a car license plate reads H.I.S. Recognizing Scarpelli's style to begin with, I zeroed in on the initials. Although I couldn't find if his middle initial was indeed I, in the course of an Internet search I found confirmation of his second sneak. According to his 2010 obituary, his nickname was "Scap," and on page 24 (pictured with detail): Scap's Trucking Co.
Posted by Martin OHearn at 12:07 PM 1 comment: 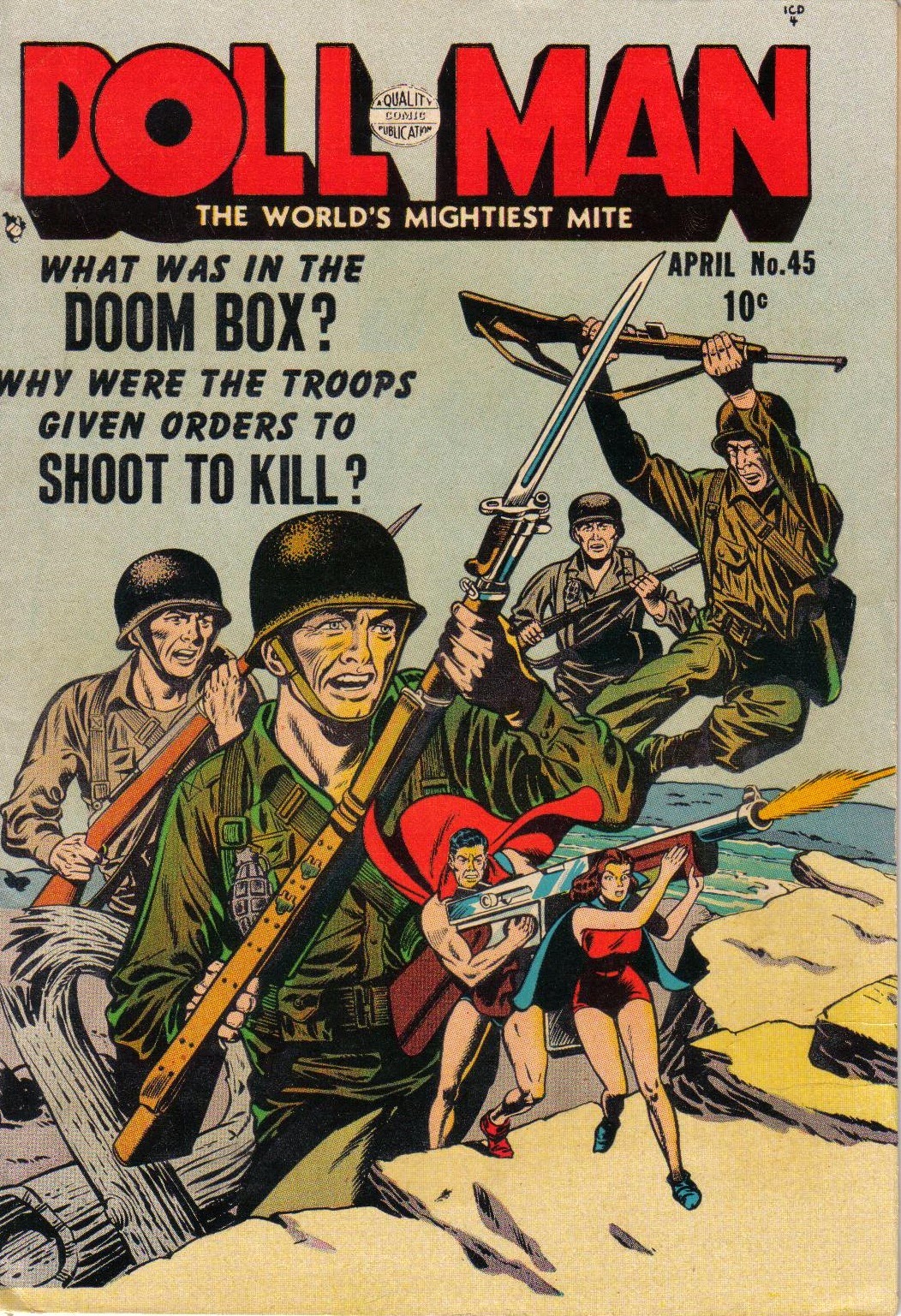 Mostly Fawcett stories (and half of those for the horror anthologies), with two stories written for Quality and one for Orbit this month.

William Woolfolk's final Doll Man stories; his and Fawcett's final Ibis. The Ibis story Charlton published later in Danger and Adventure 22 must have been done new, not taken out of Fawcett inventory.

The Wanted 51 cover identifies "Holiday of Horror" as a Mausoleum of Weird Crimes installment, but the splash page doesn't.

Posted by Martin OHearn at 10:36 AM No comments: