Writer Burt Frohman kept records by filing away his comic-book scripts with copies of the issues they were published in; when the Frohman collection was sold off, the scripts were included with the relevant comics. Doc V. shows a few Frohman scripts for Atlas in his Timely-Atlas-Comics post on Stan Lee in the Timely years (use Find twice for Frohman).
This is a script page that was on the Internet by itself (at this point I can't recall where); the stapled-on note to the artist creates a problem in connecting the script with the published story, as the note covers up most of the recipient and the title. The publisher name seems to end in "Productions." (Click for a better view). 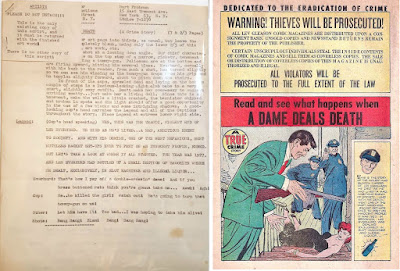 When I tried searching for the name of the protagonist, Les Everhurd, on the Grand Comics Database, I came up with nothing; he hadn't been entered as a character. Finally--a few days ago--I Googled the name, and found it elsewhere on the Internet--MyComicShop did enter Everhurd's name in the description. That guessed-at "Productions" may be "Lev Gleason Publiactions"--with the a and the c switched in the heat of typing. The instructions to the artist to leave the top third of the page blank show that this was commissioned as a lead story, as that's where that warning box went for a few months in the Lev Gleason books.

Interestingly enough, although this is supposed to be the only existing copy of the script, it doesn't show any of the editing done to the dialog/caption before it got lettered. In fact all the dialog was dropped, but most of it Frohman reuses when this scene appears toward the end of the story.