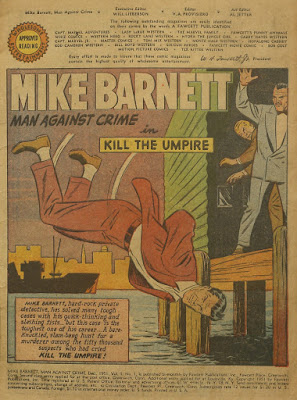 I noticed at separate times that these Fawcett stories were by Pete Riss and that the first two Mike Danger stories in Charlton's Danger and Adventure (#24 and 25) were by him too. Since the earlier issues of the Charlton title contained Fawcett inventory material, I figured the Mike Danger stories were from that company, but off the top of my head couldn't figure where.

When they bought material from Fawcett, of course Charlton didn't get the rights to TV character Mike Barnett. They pulled a Windy and Willy on him in these reprints. When I finally connected the stories, I saw that the Grand Comuics database IDed the retitled Charlton story "The Racing Stable Mystery" (D & A 24, June/55) as reprinting "Death Goes to the Races" but didn't give the source of "The Mint of Dr. Dionysus" (D & A 25, Aug/55), which wasn't retitled.

The first two Johnny Adventure stories, in those same issues, look like they were lifted from Alex Raymond's Jungle Jim, and I have no idea whatsoever if it was directly, or from where. 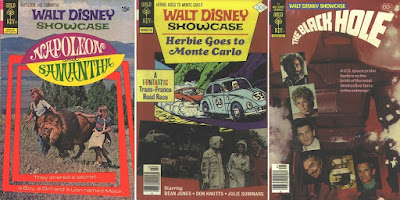 Mary Carey's only credit in the comics themselves was on the Golden Press adaptation of the 1981 movie Clash of the Titans. The Who's Who attributed a handful of 1970s Disney adaptations to her. The question was, how far back did her tenure go? As it happens, her run on Disney live-action movie adaptations coincides with the run of Walt Disney Showcase. It just now took me some extra time to work back to her writing The Boatniks and Bedknobs and Broomsticks.


After Eric Freiwald and Robert Schaefer's last Disney movie adaptation (I believe The Legend of Young Dick Turpin, May/66), another writer to whom I haven't yet put a name took over on those one-shots, including the two the CGD assigns tentatively to Mary Carey, The Gnome-Mobile and Blackbeard's Ghost. His or her last movie comic, as far as I can see, was The Love Bug (June/69). This writer also did TV tie-ins like The Invaders and The Green Hornet.

But wait—the GCD says Paul S. Newman wrote The Green Hornet 3-issue run of 1967. No. In that year it's extremely unlikely that a writer for Western Publishing's East Coast office does a West Coast book (as the Dan Spiegle art shows this to be). Per his records, Newman wrote the Green Hornet in Four Color 496, Sept/53. There's a logical fallacy in taking that to mean he wrote every Green Hornet story published by Western.

One clue to this West Coast writer's style is captions like Several minutes have passed... and other variations on "time has passed." I have yet to see that in a single Newman script.
Posted by Martin OHearn at 12:57 PM 3 comments: