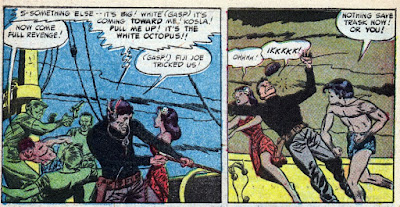 I haven't looked at much of Toby's output, but one point similar to what I'd seen at Quality jumped out at me: "Ikkkkk" in "The White Octopus" (art by Fred Kida). From there I knew to look for Robert Bernstein, and found a few stories of his so far at a company where, like Quality, he hadn't been known to write. The untitled stories in Black Knight 1 seem to be written by someone else.

The two Sands of the South Pacific stories could be Bernstein's first teaming with John Rosenberger, artist on so many of his Fly and Jaguar scripts at Archie in the early 60s.


Sands of the South Pacific

Posted by Martin OHearn at 11:15 AM No comments: