I posted the text earlier about Pete Riss actually drawing the Superman stories that have been attributed to Sam Citron for so long—here are the lists of his work on the character.

I see that in Citron's art for Warren, Gold Key, and DC in the Sixties, he has some poses reminiscent of Wayne Boring's as far as the tilt of a head here and there; I wonder if his Superman work was all with Boring and the Shuster studio, and thus particularly hard to pick out? Pete Riss is not at all hard to pick out when you compare these stories with his credited work at Timely. 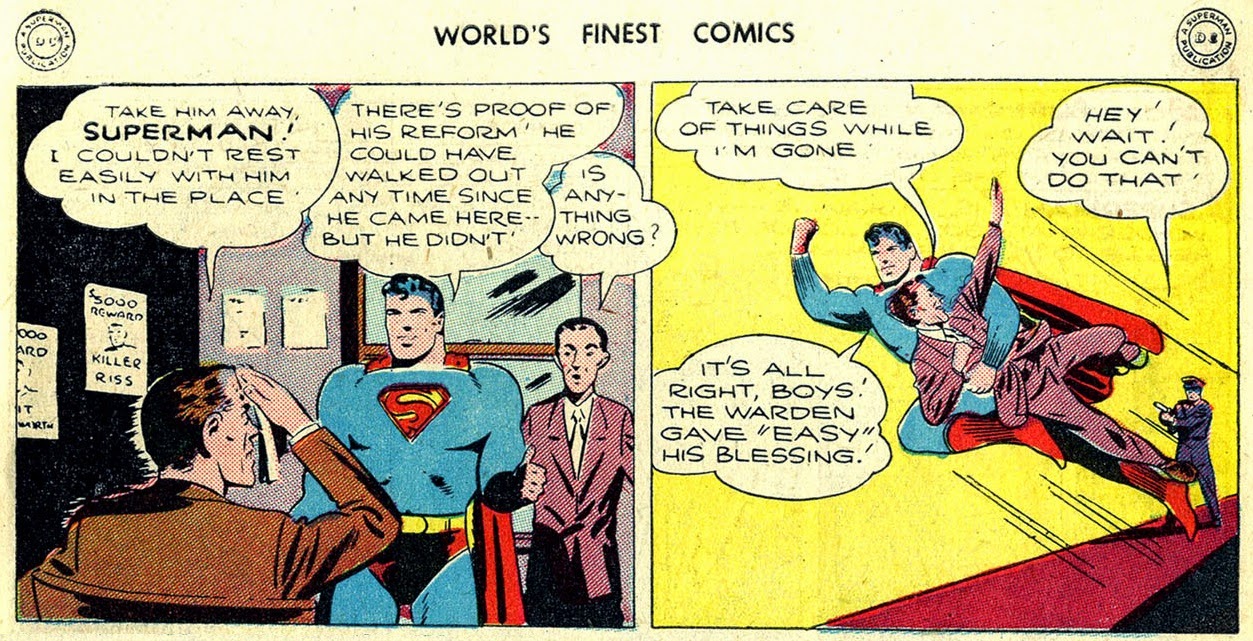 On that earlier post I misremembered the "Killer Riss" sneak as from "The Quicksilver Kid," but it was from "The Great Godini."


on Superman in Action Comics


on Superman in World's Finest Comics

Mort Leav's final Captain America story (found so far), "Double Identity" in All Winners 1 Volume 2 (Aug/48), is very obviously not by one of the usual artists. That's the one where he's most likely inking his own pencils. Out of eight post-war Cap stories (the number he recalled doing), I've come up with four more, some probably inked by other hands, one certainly so. This page from "The Last Case of Inspector Leeds" uses one of his floating-head-and-squiggly-border shots, and the woman (especially in the third panel) could have come from one of his stories for Orbit in Love Diary or Wanted. This story's art does strike me as not only his pencils but his inks. 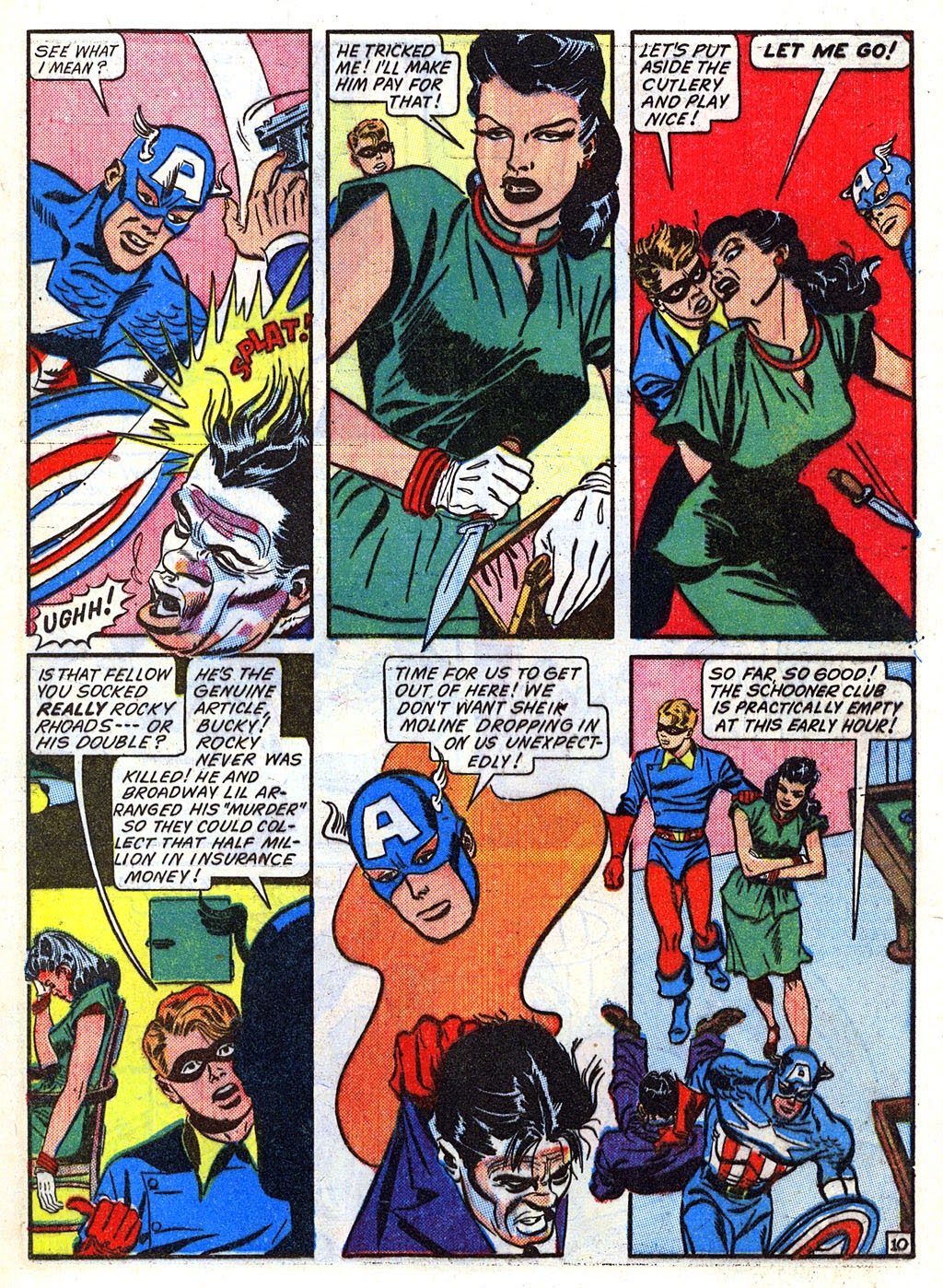 Syd Shores inked "Pennies from Heaven." What makes it even easier to mistake the story for his is that, as far as I can tell, he did pencil the splash page as well. I'd say Otto Binder wrote "Pennies"; "Inspector Leeds" is noted in William Woolfolk's records.

This leaves three more Cap stories by Mort Leav to look for.

Posted by Martin OHearn at 10:32 AM No comments:

The Thing is Charlton's first horror book. They shortly pick up This Magazine Is Haunted from Fawcett, but after that their weird-story titles fall under the Comics Code and can't be called horror. 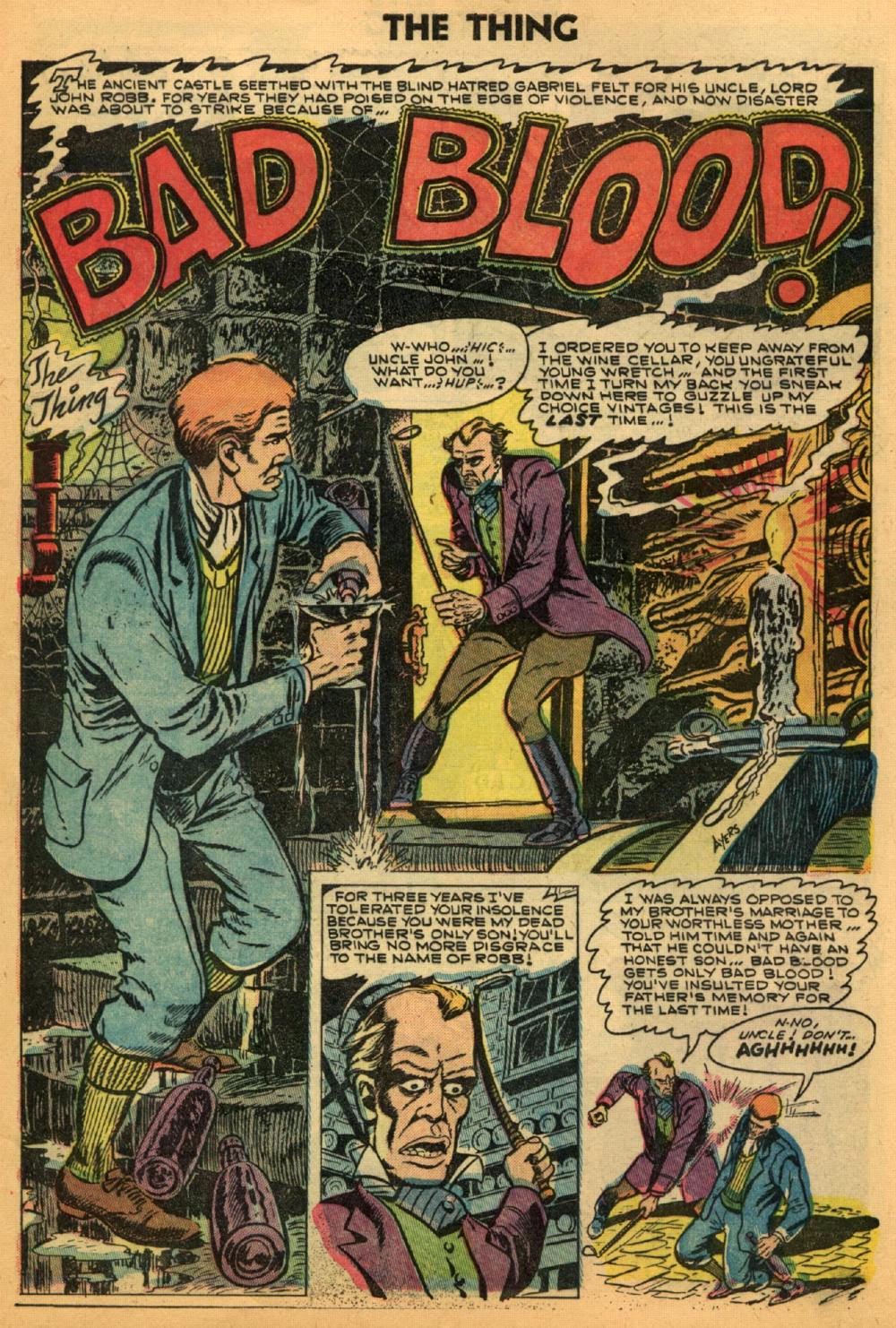 The Thing starts as a showcase for artists Bob Forgione, John Belfi, and the like, but about two-thirds along in its run becomes more the Charlton we recognize with the coming of Dick Ayers, Bill Molno, and most importantly Steve Ditko. Carl Memling starts writing before the change in the artists' lineup, and from then on has at least one story in every issue through the final one. He may have written more stories than those here, but these are the ones of which I can be positive. There are two Memling tells in the final balloon above.

The Thing
Written by Carl Memling

Now that I've gotten the miscredits to Don Segall straightened out, here are some Dell comedy TV tie-ins and one movie adaptation definitely written by him. As acknowledged in the indicia, even the ones published prior to Western Publishing's splitting off to form Gold Key in late 1962 were produced in-house at Dell rather than supplied by Western. 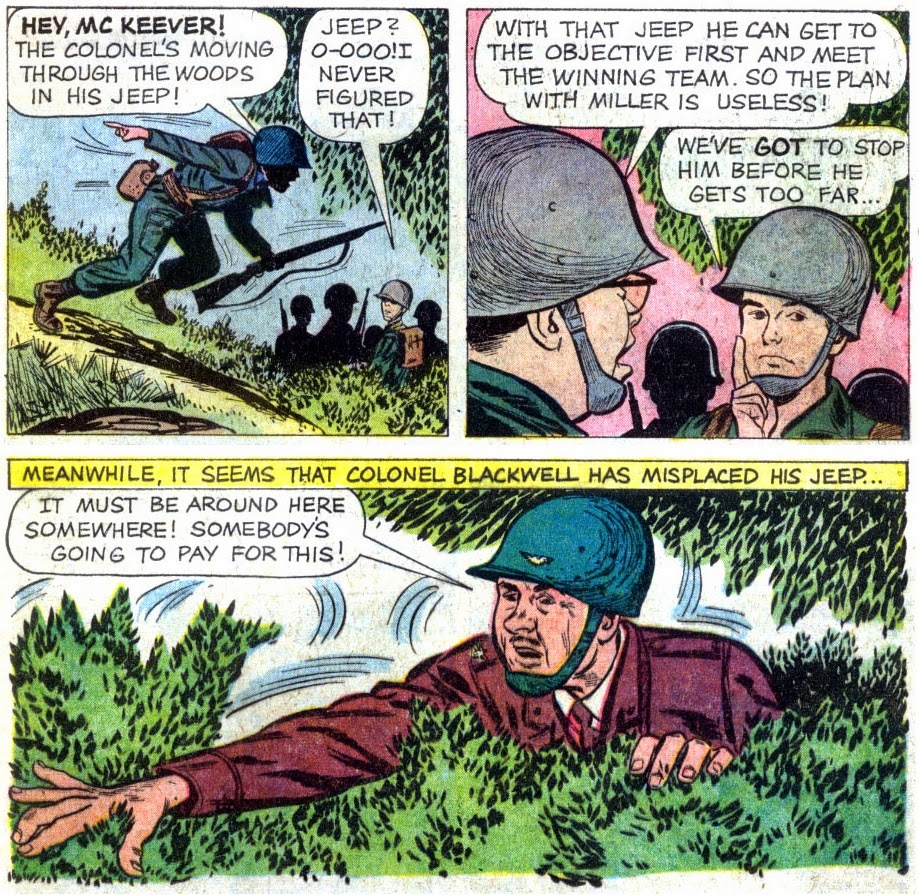 Here are tiers from the first issue of the military-school sitcom McKeever and the Colonel—one I somehow never encountered, as much TV as I watched in the Sixties. The obvious signals for a Segall script are "O-oo" or "O-ooo" and captions along the lines of: It seems he's done this... From a quick look again just now, I don't think those happen to appear in either of his credited dialogue jobs at DC; I had to pick them up once I worked backward to Dell from those Creeper and Inferior Five stories.

Where I show only one issue out of a run, others have written the other Issues. Andy Griffith 1 and 2 are Four-Color 1252 and 1341. Tony Tallarico lettered the stories he inked here.


Calvin and the Colonel


Car 54, Where Are You? backup: Tommy Trouble


Segall very likely wrote all the inside-cover one-pagers for the issues here. The ones I can be certain of (It seems that Calvin has a problem...) are "Duty Calls" and "Going Down" on the inside front covers of Calvin and the Colonel 1 and 2, and Margie 2's "Finger Painting."
Posted by Martin OHearn at 9:24 AM No comments: