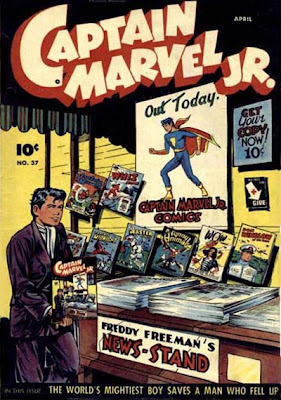 William Woolfolk was one of the most prolific and sought-after writers of the Golden Age. At any point in 1941-54 he was writing for a number of companies. Woolfolk went on to write prestigious television series like The Defenders, and bestselling novels like The President's Doctor. But in comics he went almost always uncredited, the times being what they were; seeing one of his very few credited stories, a Grand Comics Database indexer assumed from the two names given that Woolfolk must be the penciller and the artist the inker.

It turns out that he kept a meticulous sales record of his comic book scripts. A few years ago his daughter, author Donna Woolfolk, let Marc Svensson scan the old notebook. That was a generation ago in scanning technology; it was a long and meticulous task for Marc. I've transcribed the handwritten pages and added, where I could, the information that Woolfolk left out: where the stories were published. For the first few years, he entered only the feature name, but in 1945 he started entering thumbnail story descriptions.

One of the 7-page Captain Marvel Junior scripts he wrote in late 1944, recorded without a description in the notebook, was probably the first of three appearances of Graybeard, who took up crime again after serving a 99-year prison sentence. That story was published in CMJ 37, the April 1946 issue. (Woolfolk no doubt had stories published in a number of the comics pictured on the cover, as he was also writing Captain Marvel, Mary Marvel, Captain Midnight, Don Winslow, and others for Fawcett at this time.) I credit him with this story because the January 1945 page of the records book notes the second Graybeard script, and the May page the third. Next post: the first 1945 page and my transcription.
Posted by Martin OHearn at 11:19 AM 4 comments:

In the first issue of Doctor Strange's own title, an anti-sorcery zealot, Silver Dagger, stabs the Master of the Mystic Arts near-fatally. Stephen Strange is pulled into the Orb of Agamotto and a world of unreality between life and death, where the first thing he meets is a sarcastic caterpillar atop a mushroom. After Strange dies but gets better, he returns to his Greenwich Village sanctum. There, in Doctor Strange 5, December 1974, he confronts Silver Dagger with the Eye of Agamotto, counterpart to the Orb. (Story, Steve Englehart; pencils, Frank Brunner; inks, Dick Giordano; publisher: Marvel Comics.) 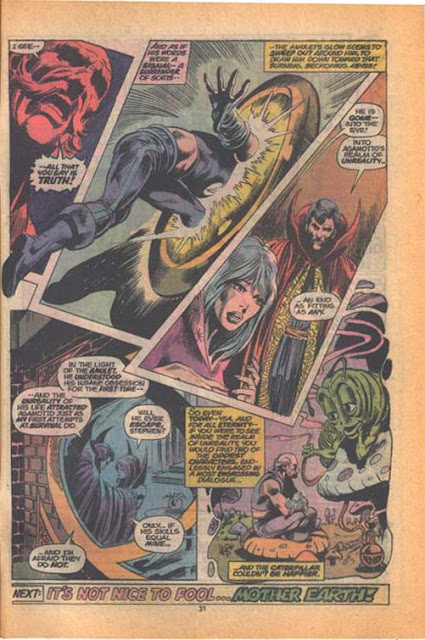 The vampire Barnabas Collins fought the Viking wizard Morath in the past in Dark Shadows 31. At the end, when "the force of his once good nature" was released from his familiar, Morath was left "now and forever locked in combat with himself, and senseless to the world." In issue 34, November 1975, it's revealed that the contact with his materialized good side "flung his spirit into a dimension of unreality, a limbo between life and death." (Story, John David Warner; pencils: Joe Certa; inks: Frank Bolle?; publisher: Gold Key.) 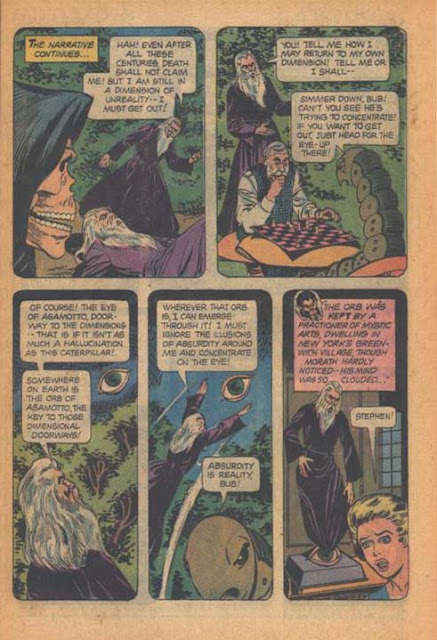 We never see "Stephen." The scene shifts abruptly on the next page as Morath leaves to seek out Barnabas in the present; "The startled woman received no explanation!" the caption notes.

Reading this story when it came out a year after the Doctor Strange one, I recognized the flip-talking caterpillar, and Clea despite miscolored hair. It wasn't until I just now looked at the stories together that I realized the mustached man playing chess with the caterpillar would be Silver Dagger. Obviously Warner didn't explain the in-joke in the script, let alone send Doctor Strange pages as references, for fear of the editors' cutting it. 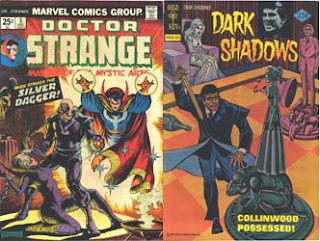 I started collecting the title with #19 and filled in only six earlier issues; I don't expect to get any more at TV collectible prices now. This sampling suggests that Arneson (who wrote the DS Story Digest) might have started as the sole writer on the title.

The Comic Reader 96 (Apr/73) said that "Gerry Boudreau has a few Dark Shadows coming up, including a Rutland story in #24," but there is no DS Rutland story. Gold Key didn't publish a story set at the Vermont super-heroes parade until Don Glut wrote one for Dr. Spektor.

The entire series was pencilled by Joe Certa. The first seven issues' covers are photos of the TV series star, Jonathan Frid. The covers I have from then on are paintings by George Wilson, who does them through #28 and 30. #29 and 31-35 have line-art covers by Certa.

It looks to me as if Joe Certa does not generally ink himself here, as he did on Martian Manhunter at DC and so forth. I see Frank Bolle inks on some issues and George Roussos inks on others.
Posted by Martin OHearn at 1:33 PM 5 comments:

An excerpt from an upcoming Alter Ego article that Roy Thomas asked me for, on IDing comic book writers:


Writers have individual styles. If they didn't, who would have cared that Stan Lee scripted over Jack Kirby's plots in the Sixties but Kirby scripted for himself in the Seventies?

Writer identification calls for listing characteristic sound effects, interjections, expressions, variant spellings, quirks of punctuation, the form of captions, and anything else from a particular story, and comparing it with the lists of various authors' data from stories already identified. Here's the beginning of my Otto Binder list:

"about as funny as the plague"
Above the clouds...
"Absolutely!"
abyss of space
ace athlete
Ace of Planeteers
across the abyss of space
Action Ace
"Action at last!"
action costume
act fast
act the part of

In many cases, just about as important as matching up a story positively with a list of one author's data is matching it negatively against others'. If an early-Sixties Superman story seems equally likely to be by Otto Binder or by Robert Bernstein (both known to have been writing the character at the time), the use of "action costume," which isn’t on Bernstein's list, might tip the scales.
The article focuses on the Superman writers of 1959-64, with examples from individual stories. Roy tells me that he's tracking down page samples from the comics for illustrations.

On this blog, I want to identify the work of writers and artists who went uncredited in the first few decades of comic books. A lot of comic creator IDs on the Web have been cut-and-pasted any number of times, generations removed now from their original sources. Did they come from the creators' records, the companies' records, after-the-fact recollections, or historians' attributions? This blog will give some of my attributions—and a number of posts will showcase one important comic book author's own records.

My pulp superhero novel was plotted in the style of Jack Kirby: the writer kept asking himself, "Can you top this?"

Marc Svensson, the cover painter of Troll, is a comic book historian who's contributed a great deal to Alter Ego; he's recorded Golden and Silver Age creators on camera at convention after convention. Marc scanned the script sales records that I'll introduce in an upcoming post.
Posted by Martin OHearn at 11:30 AM 2 comments: