Clark Mason, Spy Fighter is a feature at Atlas written, all but two stories, by Robert Bernstein, including the origin in issue 1, "The Snake of Saigon," as seen here (art by George Tuska). The "Eaaaa" was my signal to look for other Bernstein mannerisms among the stories. Remember that he was writing Black Rider for Atlas at the time; there he actually got a number of credit lines thanks to artist Jay Scott Pike.

I can ID a few of the backup stories, ones written by main feature writers Bernstein or Hank Chapman. The one art ID I'll put forth is a story by the "Dinosaur Island" Batman artist, Paul Cooper.

Jumping on the war magazine bandwagon for a while, Clark Mason is in uniform as an Army lieutenant and then a captain, in combat in Korea in #9 through #13.

Posted by Martin OHearn at 10:47 AM No comments: 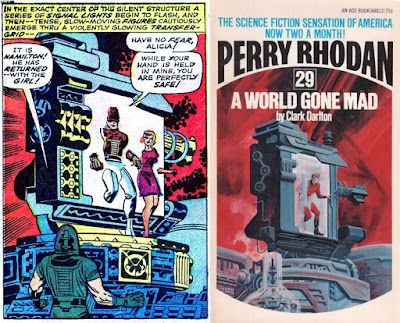 Having looked through the Perry Rhodan covers earlier, I didn't make this connection until I was rereading Fantastic Four from the beginning. This Jack Kirby panel is from FF 66 (Sept/67), the first half of the Citadel of Science story that culminated in the revealing of Him. Notice what Gray Morrow used and didn't use in the 1973 A World Gone Mad painting--he incorporated the technician into a shape in the tech.
Posted by Martin OHearn at 9:10 AM 1 comment: