In 1948 Mary Marvel loses her strip in Wow Comics to Tom Mix and even has her own book retitled and taken over by another screen cowboy, Monte Hale. She remains a member of the Marvel Family, of course, and her solo strip continues as a backup in Marvel Family into 1951.

Her final penciller there is Pete Riss. There seem to be a number of inkers—or finishers—some obscuring his style more than others. On this page from "Mary Marvel Fights the Likeness Peril" the woman in green, especially in the middle tier (note her arms), is the best example of Riss's pencils. 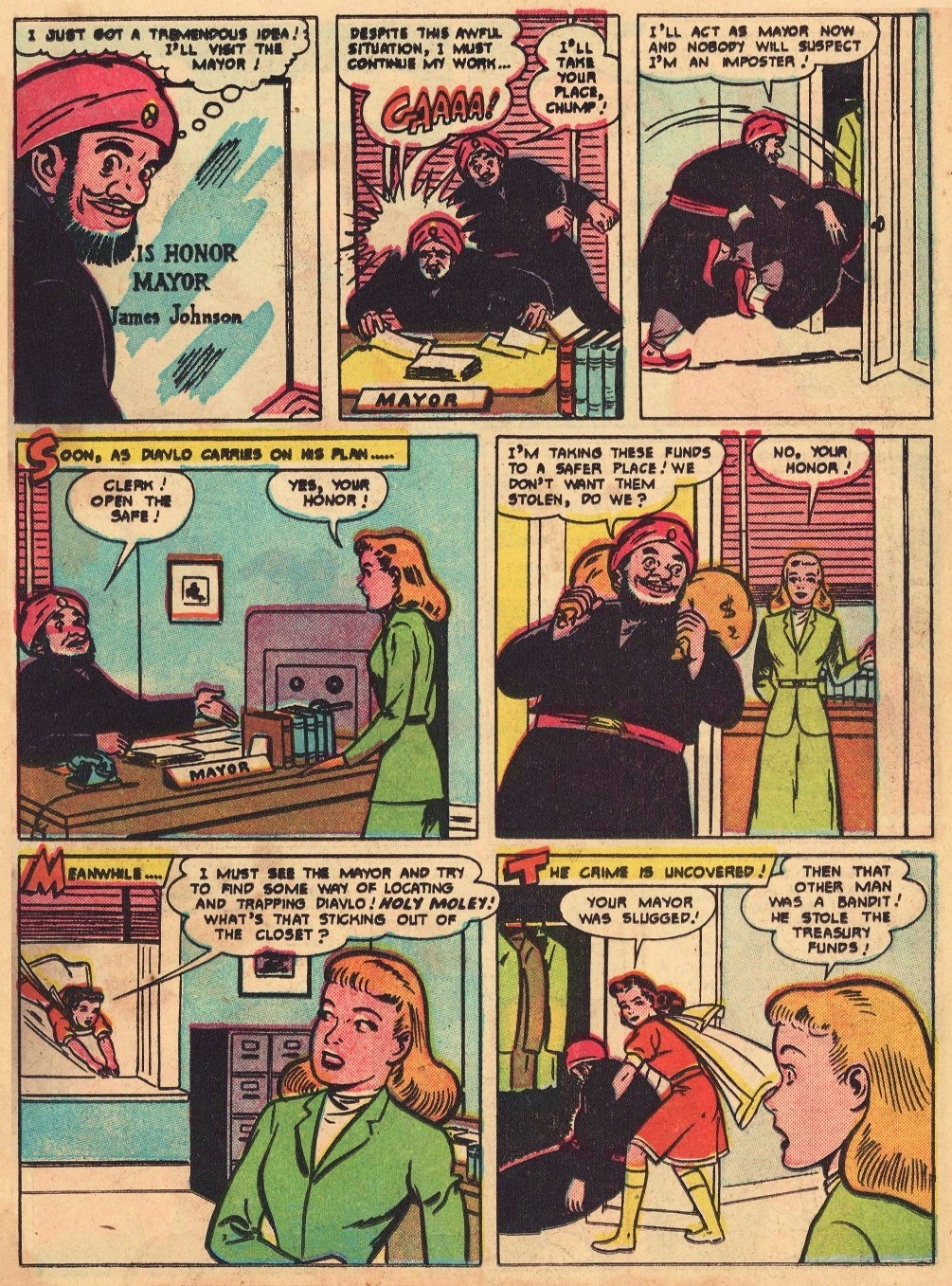 There are no Mary Marvel strips in 52, 56, and 59, as those issues' Marvel Family stories are full-length. The Mary story in 51, like the Marvel Family lead, seems to be out of inventory from a number of years earlier.

Posted by Martin OHearn at 10:44 AM No comments:

Superman Writer Woolfolk. But Probably Not the One You Expected.

A quarter of a century ago I IDed a number of William Woolfolk's Superman stories. His records later showed, however, that I'd mistakenly attributed too many stories to him—some from before and some from after he actually worked on the character.

On the earlier stories, it turns out that my Woolfolk ID was just given to the wrong Woolfolk. Compare these panels from "Super-Cowboy" with those from Dorothy Woolfolk's "Hardboiled Heart" in Love Diary in the previous post. 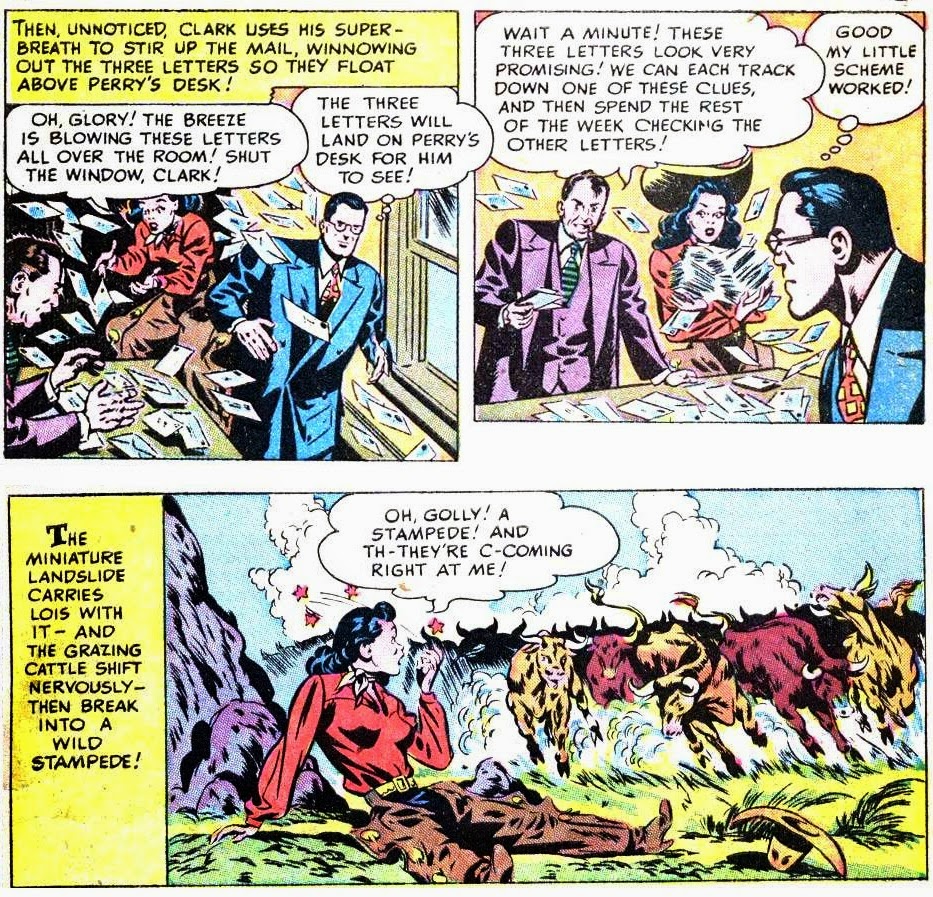 In places such as Steranko's History of Comics it's been told that Dorothy was writing Lois Lane stories when William started writing Superman. That made people assume it was around 1946, since that's when the Lois Lane back-up strip in Superman ended. Actually, it was a few years later: she was writing the Superman strip, with a number of Lois-centered stories in the mix (not unlike the other writers, of course; recall that "Lois Lane, Cavegirl" in Action 129 is by Alvin Schwartz). Those Lois Lane back-ups' writers are accounted for: Don Cameron on some, Whitney Ellsworth on others.

This is my first pass on IDing Dorothy Woolfolk's Superman stories in Action; I'm looking over Superman too. The stories I misIDed as William's that fall after his actual run belong to a third hand.

Since some of Dorothy Woolfolk's Love Diary scripts (in #17-19) were noted in William Woolfolk's records because he'd supplied the plots, I was able to get a handle on her writing style. I've mentioned that one of his pet expressions was "Good glory"; one of hers is "Oh, glory." She uses "Oh" in other expressions like "Oh, golly" and "Oh, (name). Dorothy does use "Good glory" herself once or twice. These panels are from "Hardboiled Heart" in #6.

These are the stories that I'm quite sure of at this point. There are others I might add later when I get an even better handle on her style (in other words, beyond those particular expressions); I have fifteen more stories from #1-10 down with a question mark after her name. From his records we know that William had two stories in #8 and one in #10. There are other writers on the comic; for instance, there's a run of the Prescription for Happiness feature all by the same writer.

UPDATE: I thought I might be retconning Dorothy (Roubicek) Woolfolk's name at this point, but Jake Oster tells me she married William in September 1948.

Posted by Martin OHearn at 10:54 AM No comments:

"If There Were No Superman" in World's Finest 38 (Jan-Feb/49) seems to have been a stumper as far as IDing the penciller goes. His final World's Finest Boy Commandos, as it happens, was in the previous issue. This is his second Superman story, the first being "The Man Who Bossed Superman" in Superman 51 (Mar-Apr/48); before 1949 is out he'll start contributing the occasional story to Superboy. 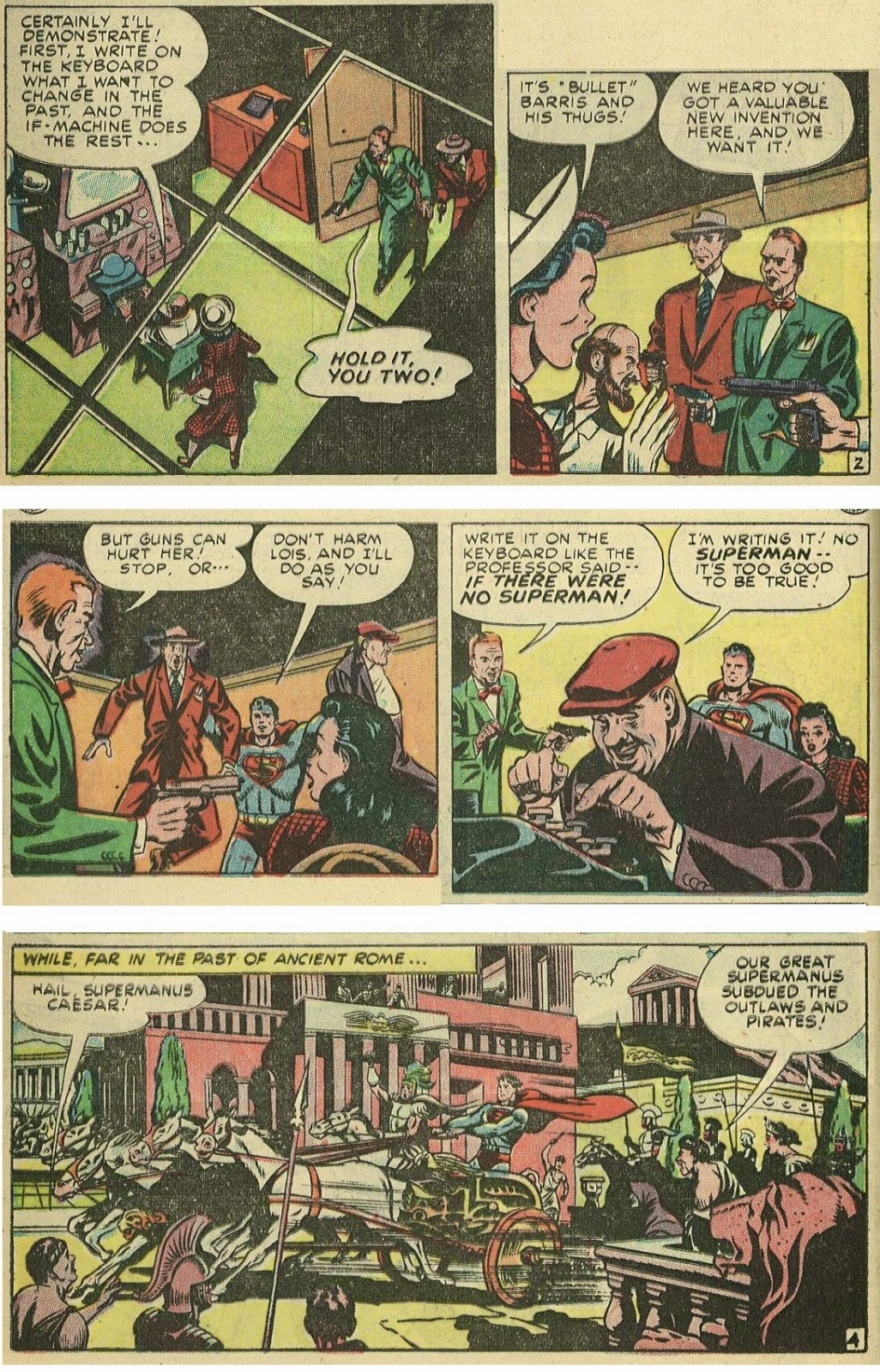 The best guess on the penciller for "If There Were No Superman" has been Wayne Boring, with a question mark. That just goes to show how important it is to ignore the inking; in this case Stan Kaye's inks on Swan immediately remind you of his inks on Boring. Try to imagine these panels as if inked by George Klein. One way or the other, you have to look behind the inks for Swan's poses and layouts and a few recognizable facial types. The less you look at Superman himself, where Boring's version is certainly the model, the better. On other pages than these, objects like castles and ships showcase Swan's realistic approach rather than Boring's impressionistic one.

Speaking of inkers obscuring pencillers, that Boy Commandos story in WF 38, "Rip Carter—Fugitive from a Chain Gang," has been attributed to Swan, but its pencils are by another BC artist you've heard of: Jack Kirby.
Posted by Martin OHearn at 11:16 AM 8 comments: