For issue #2 of Charlton's mod humor comic Go-Go, the Grand Comics Database gives the writer of the Rotting Stmups and Return to Peculiar Place stories as "Craig Tennis? [as Tennis] (signed)." Which is fine as far as it goes, but the signatures are longer than "Tennis." The Rotting Stumps story is signed "Tennis Senoj" and the Return to Peculiar Place one is signed "Tennis Scarones."

Inasmuch as the only other Craig Tennis credits I know of are on the 1966 graphic novels Christopher Lee's Treasury of Terror (Pyramid) and Dracula (Ballantine), I figured "Senoj" in the first signature and in the "ones" part of the second is the packager of the two books, writer-artist Russ Jones. The third signature here is from DC's Mystery in Space 108 (June/66). 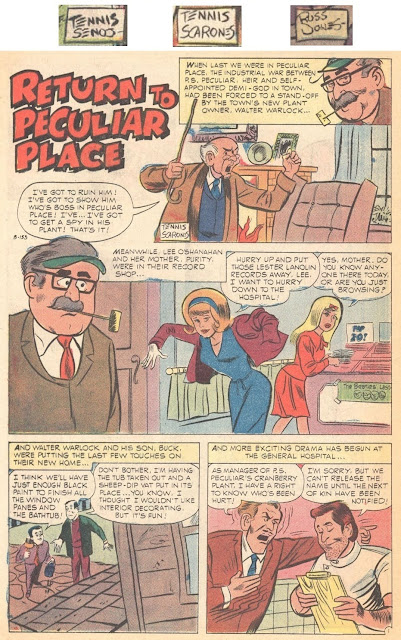 I can't see Jones' pencils in these Go-Go stories, so I'd credit him here as a inker. I was going to say co-writer--I would have thought the art on these two stories is completely Henry Scarpelli, the "Scar" part of the second signature although left out of the first. But then I asked myself how the writer would get hold of the art to sign it.

Of the four Scarpelli stories in #1 and 2, there seems to be someone else's pencilling in places at least on the Rotting Stumps story in #1--most notably the faces of the girls in the crowd scenes.

I'm not seeing D. J. Arneson's writing on these early issues. Note that #2's Miss Bikini Luv story is in the past tense, which is not the case in Arneson's stories as "Norm DiPluhm" in the later issues.