George Wildman, Charlton's editor for most of the Seventies, was the company's main Popeye artist, and continued with the strip late in the decade when the book was returned to Western Publishing (Gold Key and then Whitman).

He used a pen name (or pen initials) at Sick, which had came to Charlton to end its run. This article, "Who's Watching What" from 119 (Feb/78) is signed D.E.K. in the final panel; as it happens, its script (credited on the splash page) is by Popeye writer Bill Pearson. I believe I see Wildman's art, anonymous, much earlier—before he's otherwise known to have worked in comic books—on Dell's Felix the Cat. "Felix Forgets to Call Ohm"/"Packaged Lightning" (Felix 9, Oct-Dec/63) and "Testy Tester"/"Tested Tester" (12, July-Sep/65)—each a two-chapter story—suggest his work to me.

The best place to look for any artist's style would be secondary figures, but here I chose a panel of Sappo from a Wotasnozzle backup to Popeye, because his straight-to-the-side pose, with a head almost perfectly round, is typical of Wildman, like the character George in the Felix tier below. In the Felix stories there are backgrounds of massed clouds with a few distant birds by their edges; the same can be found in Wildman's Popeye stories. 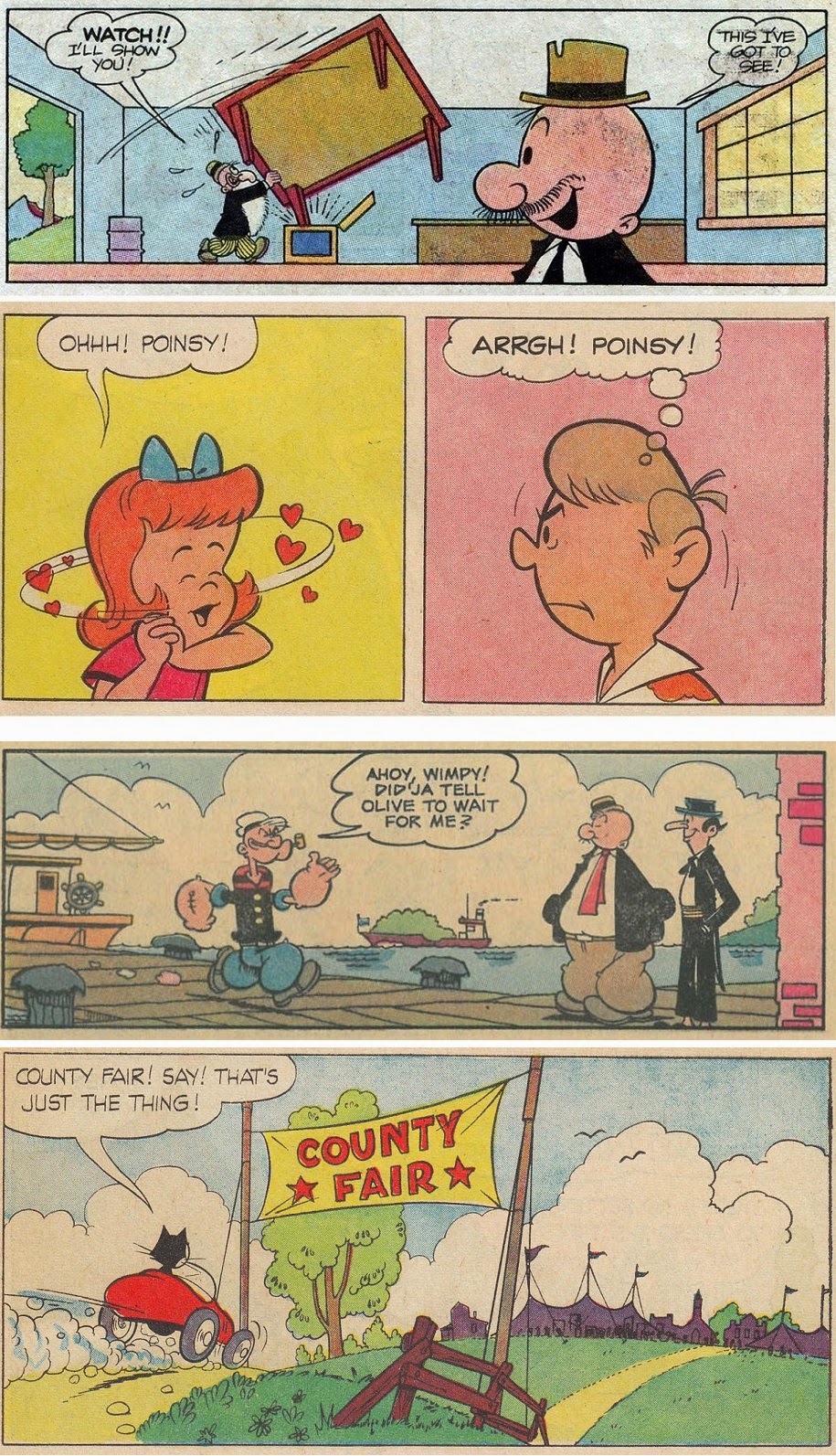 So George Wildman would be my guess on those two Felix stories.
Posted by Martin OHearn at 11:00 AM No comments:

The misattributions to Don Segall on the GCD for these books, coalescing as far as anyone can tell out of thin air, originated decades earlier with me, back around the time I misidentified some non-William Woolfolk stories as Woolfolk's. I was correct in making the leap from these Dell stories to the Tower ones, but started from a misidentification of the writer. From what I can see now, Don Segall worked at Dell up through the middle of 1965; these are from 1966-67.

DJ Arneson not long ago recalled writing a comic's entire first issue for Tower, an "Undersea guy." He actually wrote two issue's worth of those double-sized books, going by the style. He remembered writing the Dell monster superheroes specifically. His other series like the Monkees and Dark Shadows (to name only two) never got misattributed.

An early warning sign for Arneson's writing is "Great Scot" rather than "Scott" (although I've seen him use the latter once or twice). The full page here is from 1966's bookstore comic THE GREAT SOCIETY COMIC BOOK, on which he and Tony Tallarico (though not ghost-penciller Bill Fraccio) got cover and splash credits; the tier below it is from FLYING SAUCERS 1, art by Chic Stone. 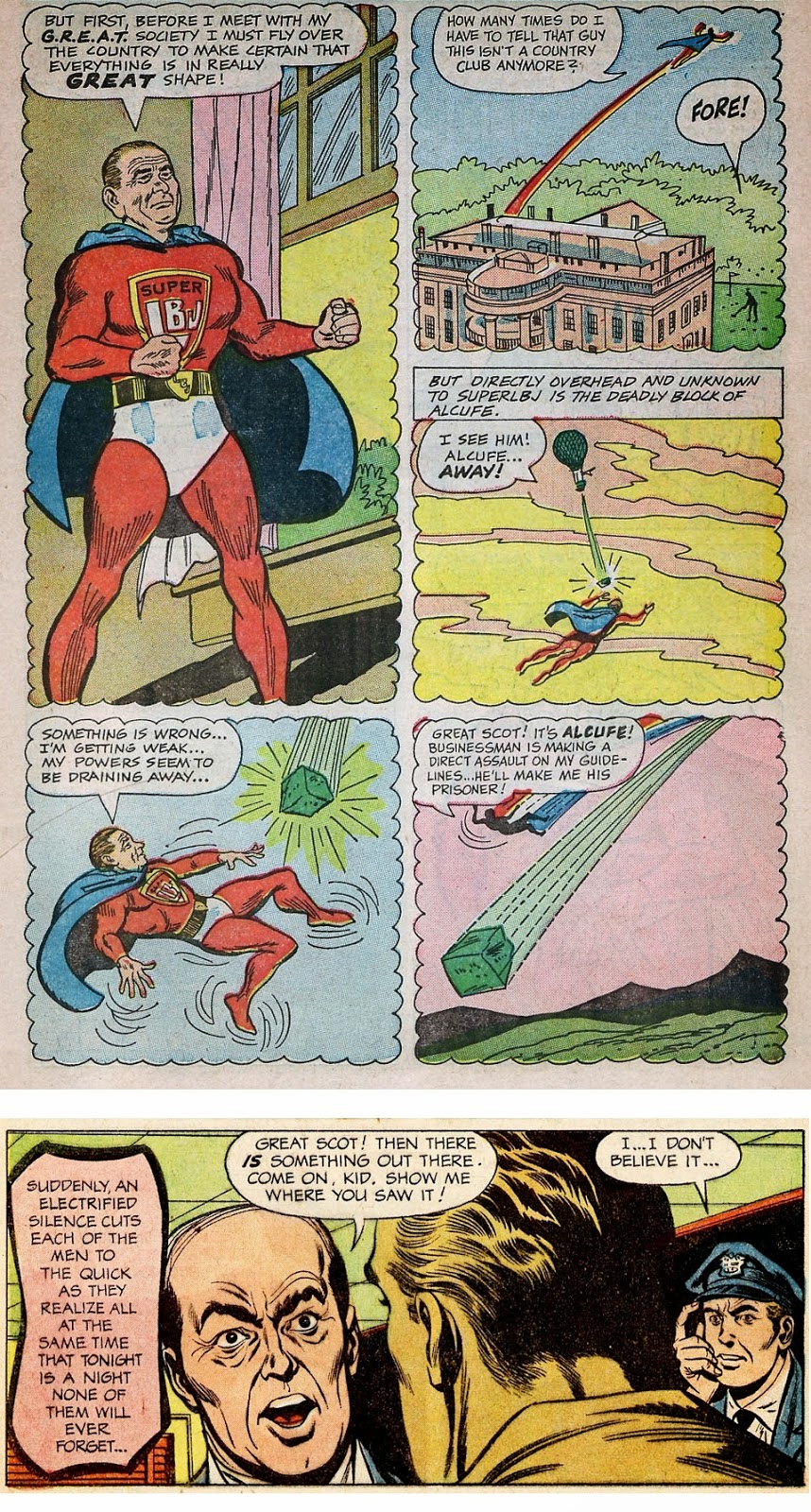 DRACULA and FRANKENSTEIN, of course, took up their numbering after one-shot tie-ins to the Universal movies a few years earlier. DRACULA 5 was skipped. The reasoning is obvious: 5 would have reprinted 1, but they skipped over it to the superhero issues. It may be a persnickety reason for the numbering gap, but it is a reason, not the mistake that fans have called it.

Scripts by DJ ARNESON, not Don Segall, at Dell

The Legion Artist You've Heard Of. "Who Was It?" "Same Guy!"

Win Mortimer took over as regular artist on the Legion of Super-Heroes in late 1968. Naturally, if you didn't take a good look, you'd assume he's the penciller of "Lament for a Legionnaire" in Action 384 (Jan/70). Well, he may have touched up the figure of Element Lad in the splash panel. But otherwise Curt Swan returns for his final bow on the strip's first run. 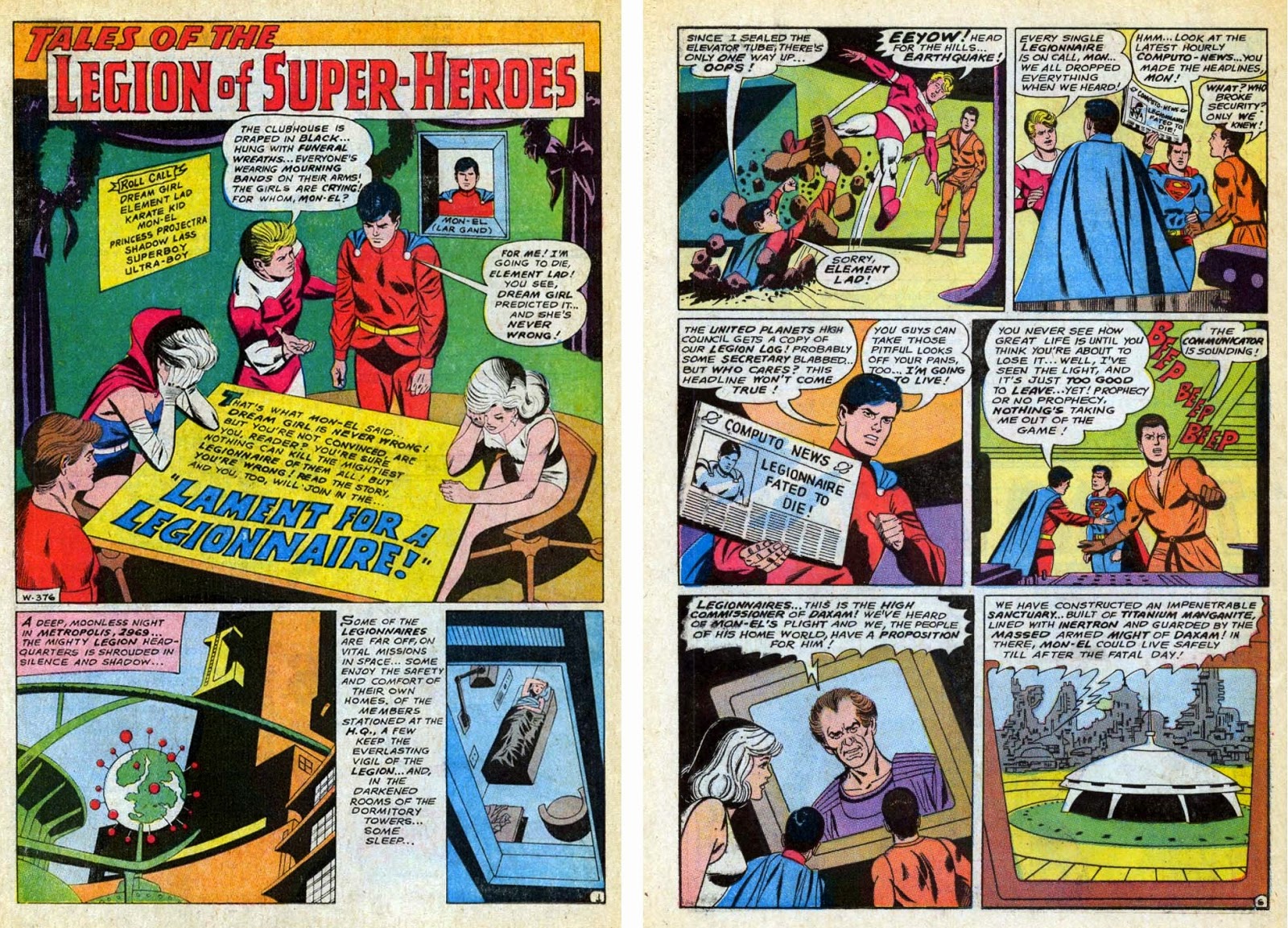 If it explains the long-standing misattribution, Swan is being inked on this story by Jack Abel, the regular on the strip at this point, whereas on the very same issue's Superman story George Roussos is his inker.

Nelson Bridwell mistook Swan's 1952 art for Mortimer's in the reprint of the Batman story "The Masterminds of Crime." He was corrected and ran the correction soon after.