A Crossover in Prose and an Homage Cover

Having posted on the American Perry Rhodan book series for some swipes in the covers, I'm turning to the original digest series in German prose and another such series begun decades later. 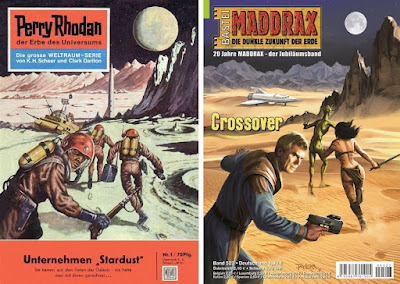 The Perry Rhodan #1 (Sept 8, 1961) cover is by Johnny Bruck and the Maddrax #523 (Feb 4, 2020) one is by Néstor Taylor for that series' 20th anniversary. A reproduction of the Bruck cover is included in the Maddrax digest just to make it obvious the new cover is an homage.

Perry Rhodan's story begins when, making the first landing on the Moon in 1971, he brings back advanced technology from a stranded ship of the Arkonide star empire in order to prevent World War III and then protect Earth from possible alien invasion. In his series, Matt Drax undergoes a Buck Rogers transition into the post-apocalyptic future and at this point in his adventures is on an Earth littered with pockets of parallel worlds.

Needless to say, Maddrax and his companions enter 1971 and meet Rhodan and company just back from the Moon (thus actually in the second issue of PR, "Die Dritte Macht"--"The Third Power.") By the end of the story, Rhodan's memory is wiped of the encounter--if that reminds you of any comic book time-travel crossovers. Also in the comic book way, this is a cross-company crossover.

"Crossover" was written by Oliver Fröhlich, and the first two Perry Rhodans by, respectively, K. H. Scheer and Clark Darlton. Perry Rhodan is at issue #3140, having been published weekly all this time.

Posted by Martin OHearn at 8:44 AM No comments: