Phil Evans on the Flying A

On most other features that the Who's Who lists Phil Evans as writing at Western/Dell, his scripts appear much more frequently than on Gene Autry--to the point that sheer guesswork as to his scripts on the Grand Comics Database gives a correct credit a number of times. On Autry's long-running book, though, there are just a handful of Evans credits. Likewise he wrote only one story for the TV title The Flying A's Range Rider--fitting in here inasmuch the Flying A is Gene Autry's production company, named for his ranch.

This partial page from "Gene Autry and the Ghost Prison" sets off Evans alarm twice: his putting a comma after "Haw" and "Huh" instead of an exclamation point. "Wal," of course, is more likely to take a comma to begin with, and you will find it in Autry scripts by other hands. 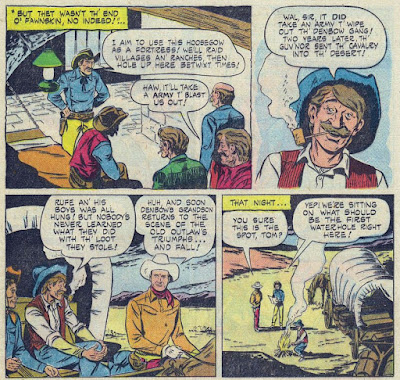 Jon D'Agostino signed the covers of Charlton's Archie type, Freddy, and you can follow his style into the stories themselves--most of them, but not all. This tier is from the last story in Freddy 46 (Dec/64): "Bargain Buck Daze." D'Agostino's art is reminiscent of early Stan Goldberg. 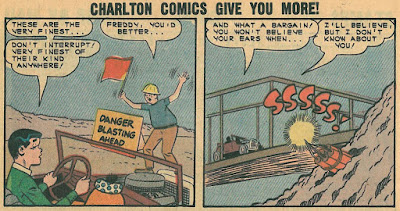 This page is from that issue's first story, "The Winner." First compare the flagmen in the two stories, but the policeman's straight-at-the-camera pose in both of his panels is the obvious giveaway for Charles Nicholas' pencils under D'Agostino's inks. 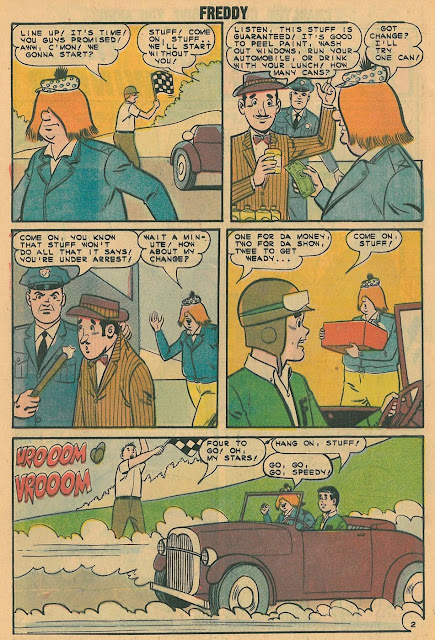 I haven't the full Freddy collection, but I think other issues bear a look too for some penciling help.
Posted by Martin OHearn at 11:35 AM No comments: