Another Trapani Ghost; Collect Them All

The Dell TV tie-in Hogan's Heroes, like Get Smart, has Steve Ditko on a couple of issues, ghosting for inker Sal Trapani. Ditko's style is so distinctive that any young reader at the time could recognize his work. After his issues, though, Trapani's ghosts are more harder to spot—and at some point, who knows? Trapani may even pencil for himself.

Hogan's Heroes 4 (Mar/67), "Operation Flick Flack,"  comes after a first issue pencilled by Dick Giordano and then Ditko's two issues. The place to expect Trapani to find his ghosts is at Charlton, and the artist I see pencilling here did work there in the later Sixties, although he's best known for his series work at Marvel in the Seventies.

The likenesses called for by a TV comic can stifle the artist's style; every time Colonel Hogan smiles throughout the issue, it's the same smile, as if only one photo were available of Bob Crane using that expression. In the panels here, the effort at making Lebeau look like Robert Clary seem strained (and not fully successful).

For some reason, there's no attempt (or a failed one) at using Richard Dawson's likeness as Newkirk, and that's where I see distinctive faces very much in penciller Don Perlin's style. UPDATE: It's not Perlin.
Posted by Martin OHearn at 10:58 AM 3 comments: 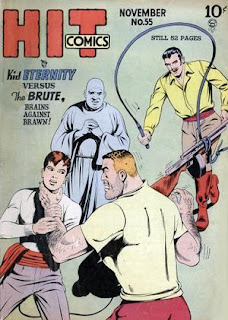 The publisher roll call this month: Fawcett, Quality, and Timely.

As usual, some Timely stories were published longer than William Woolfolk recorded the submissions in his notebook—the information in bold, such as those new page counts, forms my additions to the records.

My Tom Mix story identification is an educated guess from seeing the issue indexed, but not seeing the issue itself. UPDATE: It wasn't "The Tale of the Lonesome Cowboy" in Tom Mix 9, as I'd thought possible--it's this one. Now that I've seen "Bullets Can't Spell," I can see that the blurb uses the phrase "tale of the desert rats."

Speaking of descriptions vs. published titles, I had to flip through a number of Timely stories in this timeframe to track down all four of this month's; the Arizona Annie was the only one where the editors' title came anywhere near the notebook description.

Posted by Martin OHearn at 12:06 PM No comments:

I'll be blogging with fewer resources for awhile—I've moved and my Mac, with Photoshop, will take time to follow me. My PC laptop doesn't even want to unzip files. So, with a couple of images I already had on the PC: 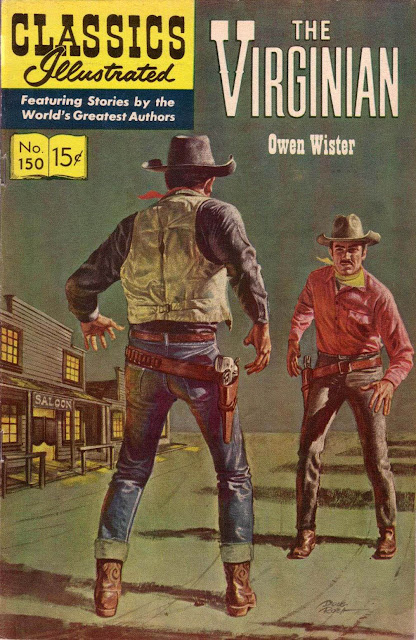 Ever since fandom has been indexing, the Classics Illustrated and World Around Us covers by this artist have been credited to Doug Roea. It certainly looks as if he signed his name that way; the E would be a stylized one without a downstroke. (Click to ensmallen; thanks, Blogger.)

However, there was a paperback cover artist at the same time who didn't sign his covers, that I've seen; he did a few early Doc Savages at Bantam: The Land of Terror and The Lost Oasis. But he was credited on the copyright pages at Avon on the Tros series and the A. Merritt fantasy novels, and on the back cover of Lancer's Magnum imprint publication of H.G. Wells' The Island of Dr. Moreau. His name was given as Doug Rosa. 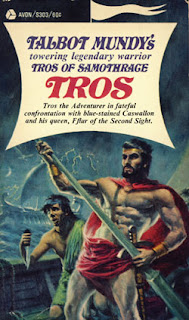 Occam's Razor—the simplest solution is the best—would suggest that instead of two Sixties cover artists, Doug Roea and Doug Rosa, there's only one: Rosa, whose name the paperback publishers didn't have to decipher from the signature. The supposed stylized E without a downstroke on the left could be a stylized S without downstrokes on the upper left and lower right.

UPDATE: Jake Oster sent me a link to a painting by Doug Rosa, done for the Marine Corps, with this signature. Case closed!

That would make two D. Rosas in comic books.
Posted by Martin OHearn at 9:48 AM 2 comments: 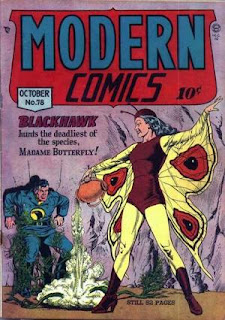 Another month from William Woolfolk's records book of scripts sold; the companies who bought them were Timely, Quality, Fawcett, and Orbit.

Woolfolk's true crime stories in this period were paid at a number of page rates. Two that I can track down to Orbit's Wanted ("Jay Jostyn" in April 1947 and "The Black Hand" upcoming in March 1948) were paid at $7 and $8 the page. Of the stories I couldn't find, October's "Seeress of Murder" was $6, and November's two undescribed stories were $9 (the 7-pager) and $7 (the 13-pager). This month's was $8 per page. I'll note that Timely consistently paid Woolfolk $9 a page for the superhero and western stories; Fawcett and Quality's rates shifted with the feature or total number of story pages. I don't know if conclusions can be drawn.

UPDATE: SangorShop found the Pontiac story that I couldn't before I posted. My most likely suspect, in this paragraph before updating, was Orbit's The Westerner (the story was paid at $8); I believe this issue's details have only just made it to the Grand Comics Database.

As usual at this point, some Timely stories had pages added or subtracted by the time the script got to the artist. That may mean nothing more than that the number of panels per page was shifted about.

FURTHER UPDATE: I found the society gal Tom Mix story when I finally examined the issue; the title wasn't a help in IDing it!