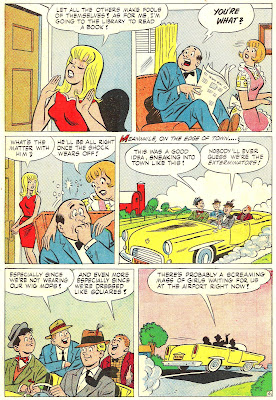 The Who's Who has Bill Williams at Tower drawing Tippy Teen in 1965 and her boyfriend Tommy in 1968--but wait, there's more. And this is not necessarily a complete list.

I found it easier to figure out Williams' style from his Fifties features like Henry Aldrich than from his Sixties work like Dunc and Loo, Kookie, Millie the Model, and Debbi. On the latter two, for instance, the editors have him emulating the styles set by the main artists at the time: respectively Stan Goldberg in serious mode, and Henry Scarpelli. And at Marvel and DC the inkers like Giacoia, Colletta, and McLaughlin further set him off from this work at Tower, where he has any number of inkers (possibly himself among them).

On the Tippy strips his work stands out from the other artists' by his characters' habit of throwing their heads back. The page above is from "On with the Show" in Tippy #1.


On Go-Go and Animal