Candy and Jonesy and Go-Go and Animal 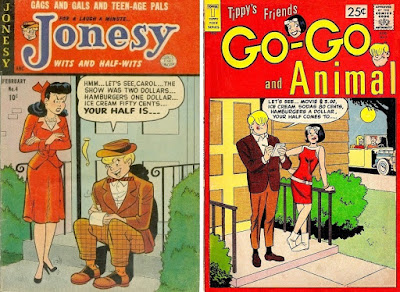 When Jack Mendelsohn reused old scripts as a writer for Tippy Teen and her friends Go-Go and Animal at Tower, he reused his own from Quality in the Fifties—not only for Candy but for the shorter-lived Jonesy.

Go-Go and Animal 3 seems a good place to stop, as so far I haven't seen any such reruns in #4.

A "New" Writer at Atlas

For about half a year there was a Camelot-like moment in 1953 in which writers as well as artist were routinely credited at a comic book company. Trojan gave the credits on the inside-front-page tables of contents on their anthology magazines.

The main four writers were Paul S. Newman, Jack Miller, Martin Smith, and Richard Kahn. A while ago SangorShop asked me if I could extrapolate Smith's stories for other companies from these. So far I haven't, but serendipity led me to find some of Richard Kahn's work at a company where he hadn't been known to write—Timely/Atlas/Marvel-to-come.

Noticeable connections among these Kent Blake spy stories at Atlas ishown in this tier from #4 are "A few minutes later!" and the drawn-out "Argghhh"; I'd made a list of characteritics for "Writer KB" and found it matching the new one I was making up for Kahn.

The writing for the next batch of Kent Blake stories seemed likely to be by the same writer, but suddenly, as Blake goes back into uniform and to Korea, the sound effect "Pi-toon" for cannon fire turns up frequently, and I haven't seen in in Kahn's later war stories for Trojan—so I'm still considering those Blake stories.

The artist on these stories is Tom Gill.

Richard Kahn scripts on
Kent Blake of the Secret Service—Part 1?