If Not Bob Oksner, Who?

Any idea who this is?

Back in antediluvian days, the only two credits superhero fans knew for Don Segall were the Creeper origin in Showcase 73 (March-April/68) and the story in Inferior Five 8 (May-June/68). If I'm recallling correctly, some time later in a letter in one of the fanzines—The Comic Reader?—Mark Evanier expanded upon Segall's writing career—mentioning his working in television and, beyond DC in comics, for Dell and Charlton.

It's taken this long for me to stumble across a Charlton story by Don Segall: the Young Doctors back-up "Twenty-Four Hour Duty" in Cynthia Doyle, Nurse in Love 69 (Apr/63). 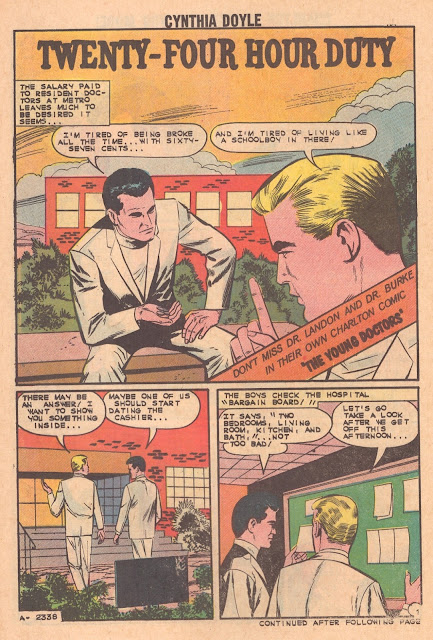 The use of "It seems" in the blurb is mirrored in the inside front cover one-pagers in Dell's Calvin and the Colonel 1 (Four-Color 1354, Apr-June/62) and 2 (July-Sept)—"It seems" in the first and "It looks like" in the second. "The boys" as in the final caption is something Segall uses likewise at Dell in, for instance, The Frogmen 7 (Nov-Jan/64).

The logical place to look for other Don Segall stories at Charlton would be in the Young Doctors' own title. I don't see such obvious clues to his writing there, but #1 and 2 are certainly not by Joe Gill, who takes over by #4 (I haven't seen #3).

Is Charlton trying to cash in on two particular doctor TV shows at once with the Young Doctors? I'd be shocked—shocked—to think so.
Posted by Martin OHearn at 1:04 PM No comments: