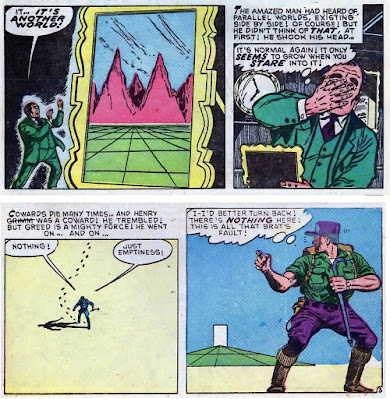 Two captions from "The Last of Mister Grimm" in Strange Tales #48 signal Jack Oleck's style: his version of Had-I-but-known, But he didn't think of that, at first! and one supplementing the description of action with two digressions into moralizing: Cowards die many times...greed is a mighty force!

After the cancellation of everything but MAD at EC in 1956, Oleck continued writing for Prize as he had been, and soon picked up work at Harvey and Timely/Atlas/pre-Marvel. At Atlas he was in on the early issues of new titles like World of Fantasy and World of Suspense. A look at a longer-running title like Strange Tales shows his tenure didn't predate those titles' mid-1956 beginnings.

The Comics Code was a good year old by the time Oleck started at Atlas. The Atlas Implosion took place with #58 (May/57), so as of #59 (Oct/57) scripts and art were out of inventory. The monster phase begins to show with #67 (Feb/59), with artists Jack Kirby and Don Heck becoming regulars, and newly written scripts by mostly Stan Lee and Larry Lieber becoming necessary.