This is Jim Wilcox--most of whose work was on Dick Cole and Young King Cole for Novelty--on a non-comics piece of work, an ad for Grosset & Dunlap's Rick Brant Electronic Adventure series. This was run on the back of number 4, 100 Fathoms Below, and probably on others like the Hardy Boys series. Rick Brant was by "John Blaine"--Hal Goodwin with, on the first three (the ones mentioned in the ad) Peter J. Dawkins. 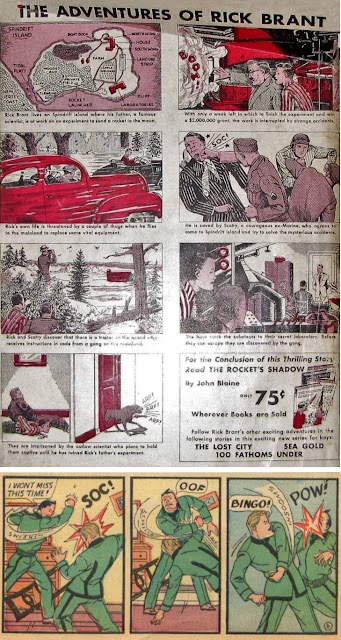 The thing that led me to Wilcox--and once you compare this to his comics work, it's obviously his art--is the sound effect "Soc!" In story after story the two Cole series contain ones like "Poc," "Thoc," Thuc," and "Whac"--do you see a pattern? This tier is from an early Dick Cole, in Blue Bolt vol 4 #9 (Apr/44).

In the letter column in Blue Bolt vol 9 #1 (Aug/48) the editors say that Wilcox "has been doing some of the writing and artwork on (Dick Cole) for five years." As the story in that issue is drawn by Alden McWilliams and it still contains a "Soc," I would say the writer has continued on the feature--whether that's necessarily Wilcox is the question.
Posted by Martin OHearn at 12:14 PM 1 comment: