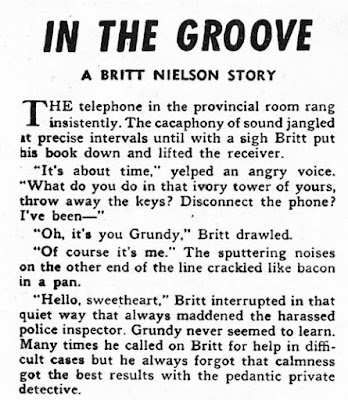 In the inventory of comic book writer Mickey Klar Marks' papers at the University of Southern Mississippi there are stories noted as sold to "Bech and Cortaza" and "Bill and Cortazar" (with the collection's transcriber putting a "(?)" after those names). To comics fans, as SangorShop has pointed out, this is obviously "Beck and Costanza" written in the records themselves.

The C.C. Beck-Pete Costanza Studio supplied scripts to Canadian publisher Anglo-American in the mid-40s (importing American artwork wasn't allowed). Otto Binder's scripts for AA may or may not have gone through the studio. But per her records, Mickey Marks' text pieces certainly did. They were published anonymously. Three formed a series about private detective Britt Nielson.

There's a text piece called "The Gold Seal" sold to Beck & Costanza in 1946 that I can't track down. Marks also sold two untitled comics stories to them in 1945 for a series called Dink, but if these ever came out (under a different series title, perhaps?), who can tell? Just to confuse things, there was a Dink series by Milt Hammer at the U.S. publisher Novelty, cheek by jowl at times with Marks' credited text pieces there.