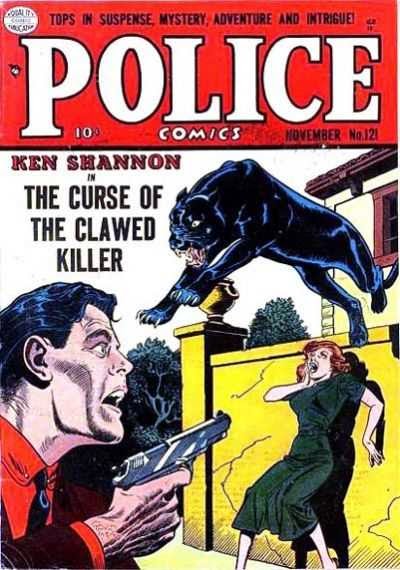 Stories for Orbit, Quality, and Fawcett.

S.O.S. for Love, again, is a continuing department with no individual story titles. (UPDATE: darkmark confirmed the following reasoning that had made me leave LJ 15, which I haven't seen, as merely a guess when I posted.) This one isn't in the same issue, Love Journal 16, as this month's story "Shameful Love"; 16's concerns a mother, but one who high-pressures her daughter's dates about marriage. The LJ 16 letters page identifies the previous issue's S.O.S. as from a man.

Jack Mendelsohn worked in comic books and animation. His Sunday syndicated strip, "Jackys Diary," ran 1959-61. Written and drawn as if by a five-year-old, and bylined "Jacky Mendelsohn, age 32½," the joke at its heart evidently flew over the heads of readers and newspaper editors who thought it was by a five-year-old.

When I went to index Dell's early-Sixties Felix the Cat for myself, I figured I'd differentiate the artists by "Felix artist 1," "Felix artist 2," and so on. One I gave a more descriptive identification: "Mendelsohn-like," since the simplicity somehow reminded me of the deliberately childlike style he affected on "Jacky's Diary."

But as I was looking at the stories' art, I realized that I recognized the writing on a run of three issues that included the "Mendelsohn-like" artist's work. I'd seen it on the earlier Supermouse at Pines and the later Tippy Teen at Tower, which I knew from the Who's Who that Jack Mendelsohn had worked on. Bails and Ware also place him at Dell at the time. His website mentions the Dell issue of Miss Peach that he wrote and drew in a spot-on imitation of Mell Lazarus's style. As I found after "discovering" these Felix stories, the Who's Who has him writing the syndicated strip in 1948-52, and his site mentions Felix as one of his comic book credits. 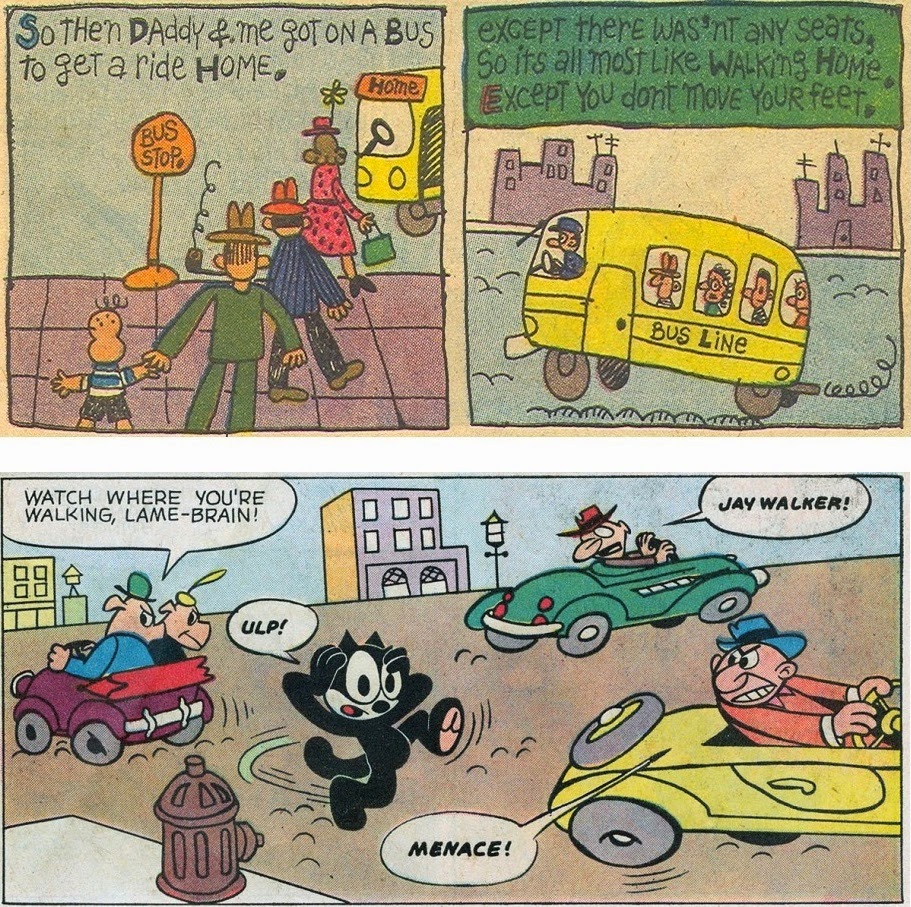 Eventually I tied together the art styles between Jacky's Dairy and Felix, I think; note the cobblestones as well as the background buildings in the street scenes. I find that deliberately primitive art style on only two Felix stories, but it seems to me that other artists could have been working over Mendelsohn's layouts on other stories he wrote here; I think I see one of those artists on a later issue or two. I can't tell if he wrote any of the one-pagers in #2-4. These three are the only issues out of the twelve-issue run that he wrote; I'm still trying to see if I can ID anyone else on the strip at Dell.

Fawcett, Orbit, and Quality: buyers of the scripts this month.

S.O.S. for Love is a continuing department with no individual story titles.
.
William Woolfolk used the concept of a riverman battling a construction project a few years earlier in Plastic Man 12 (July/48), but this Ibis story is otherwise entirely new; the two rivermen have very different origins. 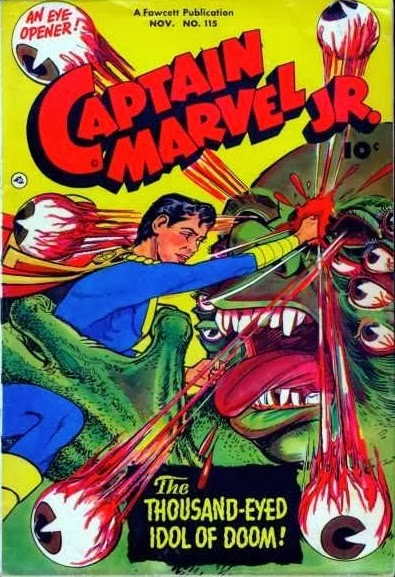 Take the Credits with a Grain of Salt: Vampirella

Editors haven't always gotten the credits right in the comic itself, and in some cases, almost 45 years later, the errors haven't been corrected in indexing. The first nine issues of Vampirella from Warren, in 1969-71, provide examples.

#1 left off the credits for the final story, "A Room Full of Changes," but—if you assumed the other credits were correct, as I'd say they are—you could work out from the list of contributors on the contents page that this was the one story written for the issue by Nicola Cuti, and that the artist was Ernie Colón.

In #2, the script for "Montezuma's Monster" was miscredited to Don Glut, but in the #3 letters page corrected it to R. Michael Rosen—when he pointed out the mistake. He was listed in #2's list of contributors.

#5 brings the miscredit that has been dutifully entered in the Grand Comics Database. The art on "The Craft of a Cat's Eye" is credited to John Fantucchio, like that of "Ghoul Girl" later in the issue. The artist team, under their collective pen name, is in the list of contributors: "Tony Williamsune," actually Bill Fraccio and Tony Tallarico. Critics may have moaned and groaned about their art—but that means it should be, at the very least, distinctive, doesn't it? The full page here is from "Cat's Eye" (the only story in the issue not signed, by the way) and the tier is from "Ghoul Girl." 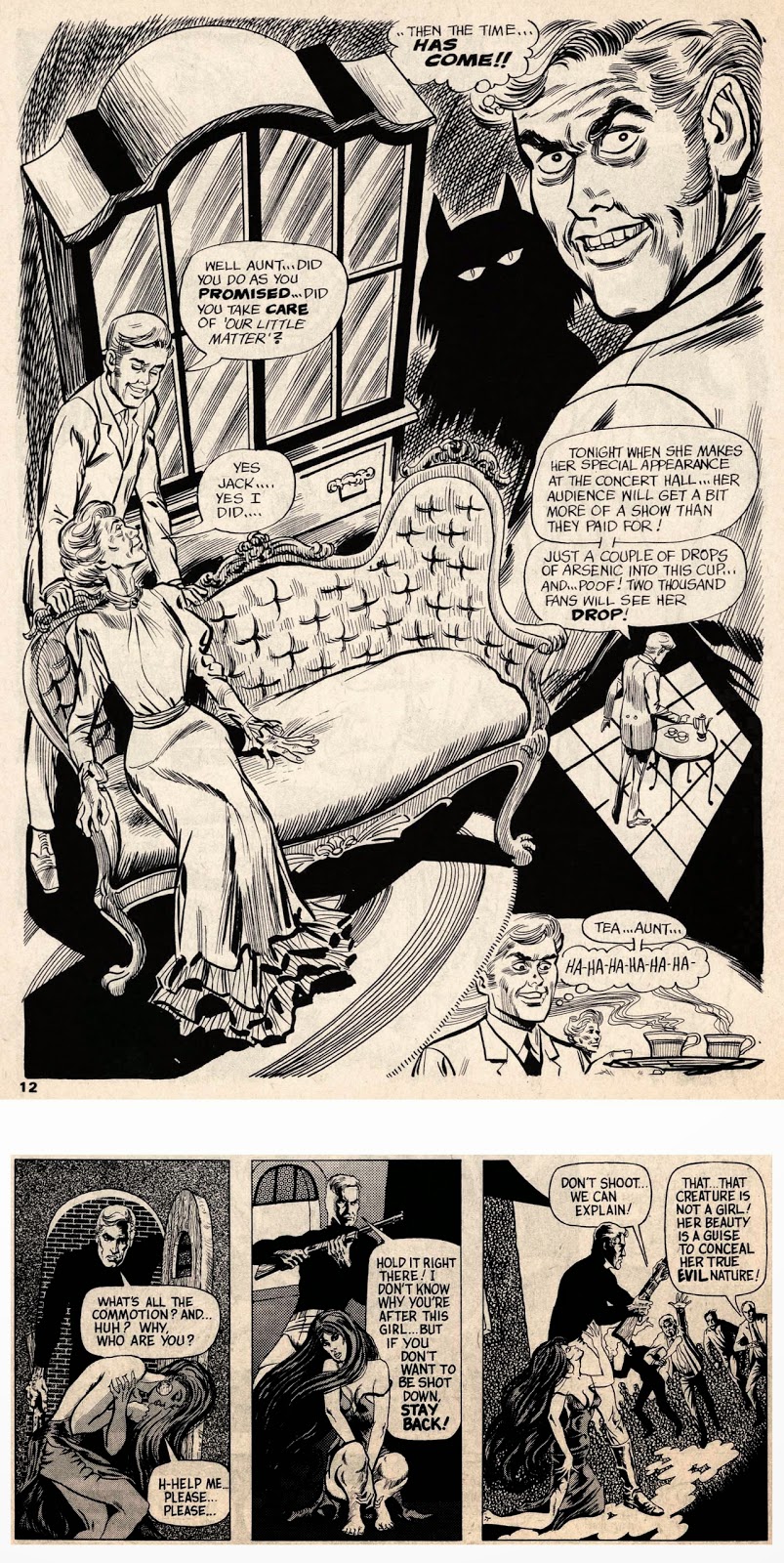 #7 credits the art of "Collection Creation" to "Williamsune." This mistake has been caught in the GCD; the actual artist, listed as a contributor, is Jerry Grandenetti.

In #9, the editors use a writer/artist's pen name, which is not a mistake on their part, but the GCD ought to credit "Alac Justice" as Jack Katz, identified as such by the Who's Who. If Katz's style is so hard to ID because he wasn't doing that much in mainstream comics at the time, can the same be said for #4's "David StClair" (meant for "St. Clair," I'd say, but misspelled "Sinclair" in the GCD)? Ernie Colón had stories under his own name for comparison's sake in issues 1, 2, and 7 as well as in Creepy and Eerie.

Speaking of pen names, let me return to one I mentioned: Tony Williamsune. On Vampirella, the GCD never mentions the penciller in that team of Tony and William: Bill Fraccio. One can see where the mistake comes from, since in #1 he's ghosting the pencils for Tony Tallarico, who takes the sole credit. But a look elsewhere gives more information about their styles. Gunmaster at Charlton gives a comparison of Fraccio's pencils under various inkers: not only Tallarico (#2) but Ernie Bache (#1, 3, 4), Vince Colletta (#87), and Frank McLaughlin (#89). (Yes, the numbering changed to take up another title's—it's Charlton.) #89 gives a credit line to Fraccio and McLaughlin. It repeats that credit in the bottom margin of a back-up story drawn by José Delbo—bringing me back to my original statement about the trustworthiness of credits.
Posted by Martin OHearn at 9:48 AM No comments: